The plight of Indian women from the Dalit population has been depicted in an extraordinary documentary directed by Michael Lawson – India’s Forgotten Women. Showing the horrors of domestic violence, dowry crime, sex selective abortion, female infanticide, rape and many other atrocities suffered by these women. A screening and discussion took place about the film in London.

"the audience clearly found it moving and shocking"

India’s Forgotten Women, a human rights documentary was screened on Thursday 1st July 2010 at the VUE West End, in Leicester Square, London. The documentary directed by Michael Lawson, explores the outrageous plight of millions of women oppressed in India today because of their caste, identity and backgrounds.

About 300 people came to the screening. It was well attended and transpired into a very engaging evening. After the 45 minute film, the audience was encouraged to engage in discussion with the panel which included the documentary’s director, Michael Lawson and presenter, Anjali Guptara, alongside Lady Kishwar Desai and representatives from Dalit Freedom Network.

The discussion was well chaired by Sky News’ Dharshini David. Although there wasn’t time to take all the questions from the audience, the lively stimulating conversations continued in the bar afterwards where Lady Kishwar Desai signed copies of her book “Witness the Night” while people continued to debate the issues presented in the film.

DESIblitz was at the screening and brings you exclusive photos from the event.

Anjali Guptara, the presenter of the documentary, was born in Britain to an Indian father and an English mother. With a background in acting, music and theatre, she was delighted have the opportunity to present an East-West perspective to an important social justice cause As a fellow South Asian woman, having met all the women in the documentary on a personal level, Anjali felt compelled to tell their story. 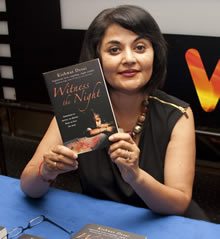 Kishwar Desai has been a TV anchor, producer and channel boss in India. Her work included programmes on the deep-rooted prejudice against women, including the serial “Women at Work.” After relocating to the UK, she wrote a book covering a century of cinematic history through the lives of two iconic film stars, Darlingji: The True Love Story of Nargis and Sunil Dutt. Her best-selling second book is a novel, Witness the Night, which deals with the sensitive subject of female foeticide and which is based on true stories of women in India. Kishwar is also the Chair of Tongues on Fire – London’s Asian Film Festival.

Michael Lawson is the founder of film-making human rights charity, Pipe Village Trust, and has made three other documentary films on the plight of India’s Dalit population – “India’s Broken People,” “India’s Hidden Slavery,” “India’s New Beginnings.” He is a composer, and has also written the sound track for the documentary screened. 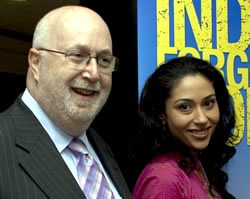 Dharshini David is a business correspondent with Sky News and was previously a financial correspondent and presenter at the BBC where she reported on economics, business and consumer affairs across BBC News in London and also presented for Panorama. Dharshini was born and brought up in London and read Economics at Downing College, University of Cambridge.

Rosemary Morris works with the Dalit Freedom Network (DFN). She has worked with India’s Dalit community for many years, supporting education programmes and, most recently, a DFN campaign against the trafficking of Dalit women and children. She previously lived in India, where she and her husband were involved in NGO work. She was instrumental in introducing Michael Lawson to the needs of the Dalit people, and their empowerment continues to be her greatest passion.

Ravin Royer has considerable first-hand experience of addressing the plight of Dalits and the repression of Dalit women in north India. He has been involved in many empowerment programmes among Dalits, including as Associate Director of the Dalit Education Centres established by Operation Mercy Charitable Company (OMCC).

Lady Kishwar Desai’s quote from the evening was,

“The problems that a majority of Indian women face are often forgotten, buried under the shadow of India as an economic giant. Very few Indian women are part of this economic turnaround.”

She added, “In fact they continue to suffer caste oppression and even, as I found during the writing of my novel, Witness the Night, gendercide. The evening at the Vue gave us a very important platform to discuss these issues.”

The feedback from the other guests on the night was of encouragement, shock and appreciation. These included:

If people would like to join the campaign against the trafficking of India’s Dalits – including bonded labour, sex trafficking, temple prostitution as portrayed in the film, you can sign up at www.dfn.org.uk – Dalit Freedom Network (UK)’s website and give them your support for this human rights cause.