Rabindranath Tagore’s panitings came under the hammer at Southeby’s on 15th June 2010 and exceeded sale price estimates immensely. Giving the Dartington Hall Trust the sale proceeds to use for future development of the Dartington estate.

Rabindranath Tagore has been renowned as a world-class poet, playwright, songwriter and author, having penned several plays and poems that blended Indian and Western traditions. The legacy of his ideologies remains strong within the hearts and minds of Indians today, most clearly through their national anthem ‘Jana Gana Mana,’ written by Tagore himself.

The South Asian Art auction in Sotheby’s on Tuesday 15h June 2010 included twelve paintings by Tagore which had been gifted to Leonard and Dorothy Elmhirst of Dartington Hall that have never been seen in the open market before.

The cause for their listing in the auction at this time is to raise funds for charity through the Dartington Hall Trust, where the paintings have been kept in the Trust’s collection since they were given in 1939. 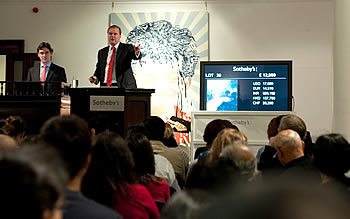 When the issue arose that Tagore’s paintings would be auctioned off in London’s prestigious auction-house Sotheby’s, there was major protest and a backlash by Indian communities that consider Tagore to be their patron.

In response to urges from West Bengal Chief Minister, Buddhadeb Bhattacharjee, to stop the auctioning of important artefacts of Indian heritage, Prime Minister Manmohan Singh expressed in the Hindu Times, “It will be difficult but we will try; even in Gandhiji’s case, it was left to Mallya to bid for articles.”

The political significance of this matter not only stems from the status of these paintings as items of great cultural importance to Indian heritage, but also with the view that the 150th anniversary of Rabindranath Tagore’s birth is approaching in 2011.

DESIblitz attended the auction and we bring you some exclusive photos from the event below.

The auction itself was a huge success with numerous press attendees alongside a crowded room full of prospective bidders.

Below is a list of of  the other ten Tagore paintings and their respective sale prices.

With winning bidders both in the room and bidding via telephone, the identity of many of the new owners of the highly-coveted Tagore paintings were not easy to determine. Buyers ranged from Indian, South East Asian and US private collectors. Anonymous buyers bought the top selling Tagore paintings.

Vaughan Lindsay, Chief Executive Officer of the Dartington Hall Trust, said, “We are delighted with the results of the sale. These funds will be used to support our ambitious 5-year plans for the Dartington estate, and the expansion of our charitable programmes in the arts, social justice and sustainability.”

Holly Brackenbury, Deputy Director in South Asian Art at Sotheby’s,  said, “Rabindranath Tagore is a beloved and revered figure in India and around the world. We always knew the offering of such a group of works as those from Dartington Hall Trust would be met by a great deal of interest and excitement – and we were not wrong.”

Other works of interest were by artists such as Francis Newton Souza, contributing another two paintings to the top ten lots; Sayed Haider Raza with Rajasthan, an acrylic painting on canvas raising the highest amount in the whole auction, and Maqbool Fida Husain. 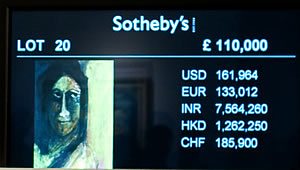 Clearly there is still a great amount of interest in South Asian art around the globe, with bidders from a wide range of geographic and cultural backgrounds being in attendance at this well-publicised and at times, controversial auction. Through encouragement from the Indian PM Manmohan Singh, the Indian Ministry of Culture attempted to purchase the Tagore paintings prior to the auction, but they were ultimately unsuccessful as the auction still went ahead.

Commenting on the sale overall, Zara Porter-Hill, Director and Head of South Asian Art at Sotheby’s, said, “We are delighted with today’s results, which demonstrate the continued confidence in the Indian market and the evergrowing appetite both in India and around the world for South Asian Art.”

Tagore’s collection of paintings raised a record amount for the Dartington Hall Trust, however, now being the property of different private collectors, it does not appear that these works of art will be part of the 150th anniversary celebrations of Tagore’s birth, to be held in 2011.