Drag fashion is back with Patruni Sastry and the team. Dismantling gender-binary fashion with sarees, Patruni talks with DESIblitz.

"One can become sanskari as well as sluty in just a saree."

Drag isn’t new to the fashion world or South Asia. Patruni Sastry is bringing South Asian drag to the forefront once again.

Drag, Patruni explains, has a long history in India. However, the west implemented drag during the Shakespearean era.

Patruni Sastry, emboldened by Bengali culture, dons the traditional saree in the photo project where the gender-neutral forms of strong womxn are personified and represented with drag.

Patruni, with the photo project, aims to “dismantle the gender binary approach to fashion”.

Feeling restricted by COVID-19’s lockdown, the team were able to let loose through their project of bringing Rabindranath Tagore’s heroines to human form.

From feeling like Chitrangada and climbing up trees and rocks to connect with tribalism to making Potrolekha a newlywed woman, Patruni and the team cover it all.

Patruni even dressed up as a Desi bride under the theme “Why Can’t Men be the Bride?”

There are bold colours and traditional themes covered by Patruni with lots of gender-bending.

In an exclusive Q&A with DESIblitz, Patruni Sastry talks in detail about “Reimagining Heroines of Rabindranath Tagore with Drag.” 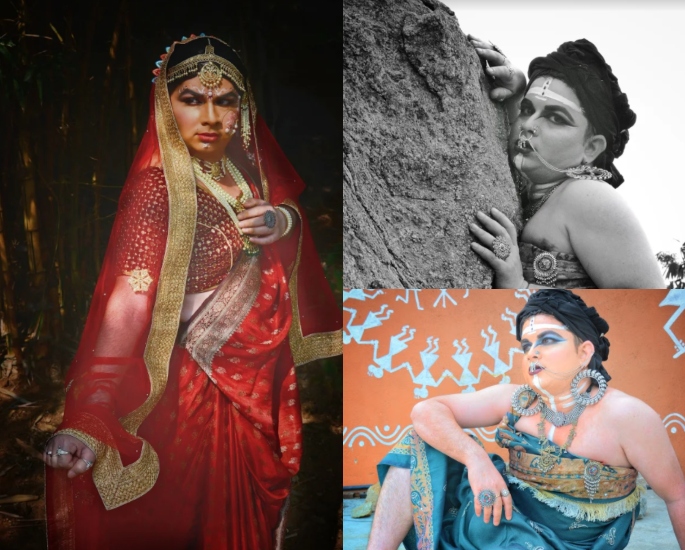 What was the inception of “Reimagining Heroines of Rabindranath Tagore with Drag”?

Though I am a South-Indian Telugu person, I am the third generation of my family who settled in Bengal.

So for me, I had a cultural mapping with Bengali culture. This was the very first thing, which made me get close to Bengali literature.

I have been growing up listening to Rabindra Sangeet and reading a lot of his poetry and novels. This also made an impact to see how his work inspired other directors within the field of art.

This interest landed me in two of the wonderful works in Bengali cinema. One, Chitrangada, a movie by Rituparno Ghosh, and Tasher Desh by Q.

Both of these have a reimagination of Tagore’s work with sensuality and sexuality, which inspired me to see these two characters with drag, which helps us see them as genderless.

What adversities did you face being a South Asian in drag?

Being a drag performer in India, we are always seen as non-relevant and not equivalent to the western drag.

Drag in the west is a great art just like theatre and dance but in India, it’s still seen with a mercy view.

The main reason for it is that the Indian diaspora is failing to acknowledge that drag is born in India.

The very first documentation of the art of drag was in Natya Shastra texts. which are written in 100 BC. Drag is also mentioned in texts like Ramayana and Mahabharata.

It’s only in Victorian-era the world has heard about drag and that might be an aftereffect of India being colonised by the British.

“So, drag was stolen from India.”

But, today when we do drag, people assume that it’s a western art form, which is why there is dismay, hatred and catcalling happening towards drag artists.

How did you transform into drag?

My style of drag is called “Tranimal Drag”, which is a post-modern approach to traditional drag. The idea of tranimal drag is to create a lookout for trash, junk, or available objects.

The art is not to give a clean image but to create a cathartic image of beauty.

However, I do go back and forth with traditional drag too.

Like this one, where a stylist friend of mine, Aniket Shah, proposed an idea of recreating images of Rabindranath Tagore’s heroine. I jumped into the thought.

I find makeup as my getaway for my biological body and, fortunately, I have friends like, Sunny Vaibhav, who painted me for this current project who bring out the transformation from the male body to that of a woman. 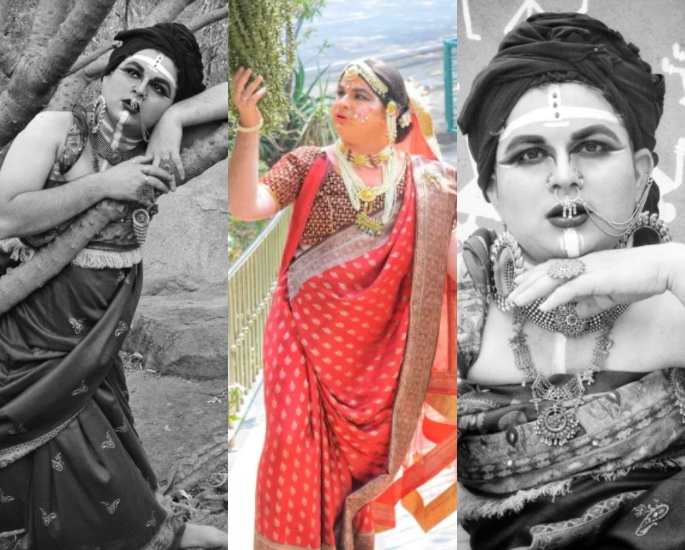 How important is fashion when it comes to drag and your project?

Fashion is always important for drag and, I believe, the drag community had contributed a lot to the current fashion trends.

I use Avant-garde fashion to present my work time and again. However, for this particular project, Aniket has a vision of how to style me.

I gave him the complete ownership to ensure that his vision of styling me comes to play.

For this project, we worked with Hyderabad’s celebrated label ‘Renusaa’ by Saikumar and Rehan who bought the balanced twist to ethnic wear and the idea of drag together.

It was their idea to play with saree and create a look, which is both Indian as well as works as an enhancement for the project.

How do you decide on styling your outfits?

Usually, I am a lazy drag queen, so I create my outfits from the trash. Sometimes I go with the colour, texture, or look of the outfits.

I buy them from the street and local market places to make it look urbanised and sometimes I make them by joining all the available options.

“However, sometimes the best part is to collaborate with stylists who do the right thing for you.”

This entire styling for this project was curated and bought together by Aniket who is also a jewellery designer, having his apparel line up brand Flirt Diamonds.

Hence, he ensures to have both the costumes and the accessories planned for shoot way beforehand, which reduces my time and makes the experience shine.

Is there drag representation in the fashion world?

Yes, of course, I would say drag always sets up the fashion trend. Imagine a time when Indian female impersonator Bal Gandharva use to perform wearing Banarasi sarees.

It created a brand statement where every woman wants to wear the same saree Bala Gandharva Ji wore, or have the same look as he does on stage.

Similarly, there are tons of such stories where female impersonation or drag became a style statement of that time.

In the west, drag performers are always on the ramp, wear glam and glitter match to promote gender-fluid and gender-neutral clothing.

Many drag queens have inspired fashion brands to think about fashion as an art. 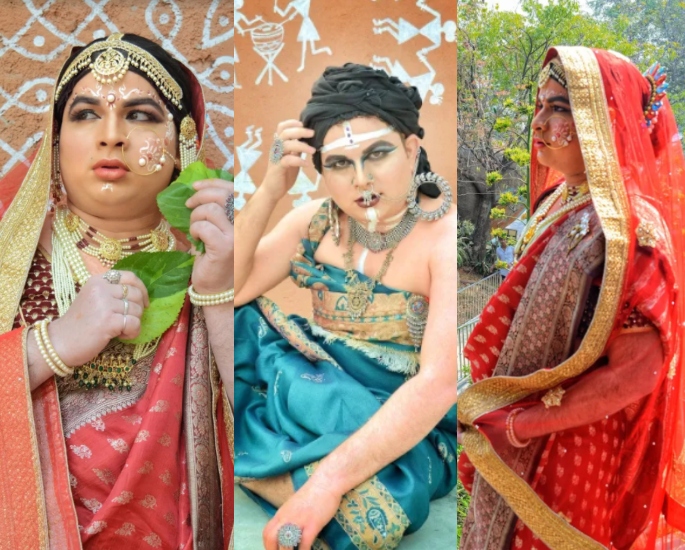 Who is your favourite drag character in your project?

Though I love both the characters, I loved being Chitrangada. The full credits for that go to our mua, Sunny Vaibhav, who created a significant characterisation with his make-up art.

It was also the imagination of the Photographer, Anindya Biswasthat. The images represented her valour and strength by the way they are captured.

The other look, Potrolekha, was rather a surprised one.

It kind of made me realize how beautiful I was born and also made me think why only brides should dress up, why not the bridegroom?

How does drag impact you as a person?

Drag has now become a way of expression.

May that be sad or happiness this became a language through, through which I can talk about data science to customer service, from business to gender sensitisation.

“Drag is a language to express those feelings which don’t need a word to speak.”

It is far more beyond the body and mind. It’s an experience which everyone should have at least once in their lifetime.

Who are your drag inspirations and why?

The person who made me aspire to be a drag artist is Daniel Lismore.

Their life as an art piece has helped me see drag being an internal part of my life.

I am also inspired by the Tranimal Drag movement creator Austin Young, Freda Prey and Speaky Blonde whose outburst of anti-beauty and anti-glam make me realise drag is so much thought-provoking to everyone.

I am also inspired by pioneers such as Chappal Bahadur, Bala Gandharva, and many drag folk artists of India who inspire me to stick to my Indian roots while I perform drag.

What impact do you hope your project has in the fashion industry?

I believe this project would open up more doors for more collaborations between fashion designers and drag.

In India, drag fashion is still in its early stages and hence people don’t know how the industry would grow to.

Check out the west and their drag fashion, which is breaking every statement.

Indian designers should bring more body-positive, gender-bend models and drag queens who can pass messages of inclusivity and ensure to grow the market as a whole. 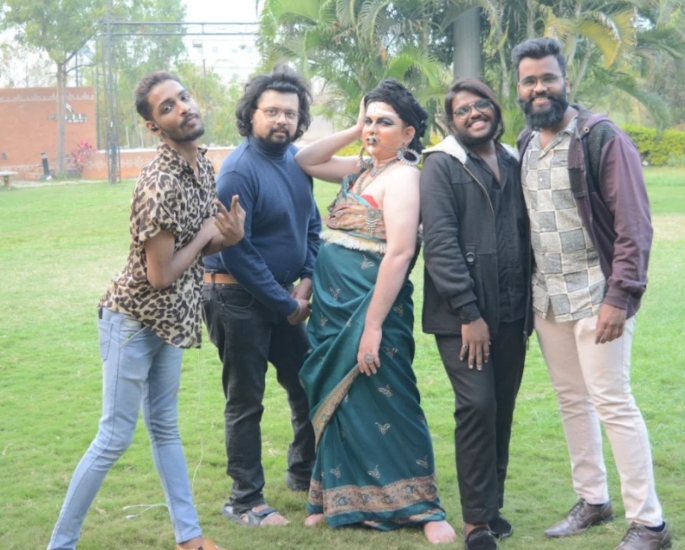 Why did you choose to highlight sarees in your photos for this drag project?

Saree is important. This 6-yard long unstitched cloth is both a trend, a political statement as well as a fashion explosive.

I would rather wear saree everywhere. Saree is one of the most gender-neutral garment ever discovered.

“The taboos with sarees need to be revoked by the society that only women should wear it, saree is sanskari etc.”

“But this is far beyond the imagination. One can become sanskari as well as sluty in just a saree.”

“We used the saree to make it look more India.”

It was also to raise awareness of Indian saree weavers and their struggle within the fashion markets to get their niche and also to pass a message that men can wear a saree too.

Patruni Sastry’s project uses fashion to break-down gender stereotypes. The use of the Indian saree brings drag back to South Asian culture.

Potrolekha from Tasher Desh and Chitrangada from Chitrangada have had their gender truly bent by Patruni and the team.

Patruni Sastry, Vaibhav Mua, Rehan and Saikumar and Aniket Shah can be found on Instagram, with further pictures of their project.

Arifah A.Khan is an Education Specialist and creative writer. She has been successful in pursuing her passion for travelling. She enjoys learning about other cultures and sharing her own. Her motto is, ‘Sometimes life doesn’t need a filter.’
Fawad Chaudhry’s Wife launches Fashion Label after Daughter
Lack of Clothing Orders impacting Bangladeshi Factories