The Legacy of Rabindranath Tagore

Rabindranath Tagore is celebrated for his works which impacted culture and politics. Find out about the influence of the ‘Bard of Bengal’.

He brewed a legacy between the 19th and 20th century

Rabindranath Tagore, a renowned literary hero, is one of the world’s most influential creatives.

Known as the ‘Bard of Bengal’, his contribution to literature and the arts remains celebrated internationally.

Rabindranath Tagore also impacted the political scene of India with his poetry. The themes in his work continued to be remembered for its influence in literature and culture.

We explore the rich legacy of South Asia’s most famous poet, philosopher and scholar Rabindranath Tagore.

The Early Life and Education of Rabindranath Tagore 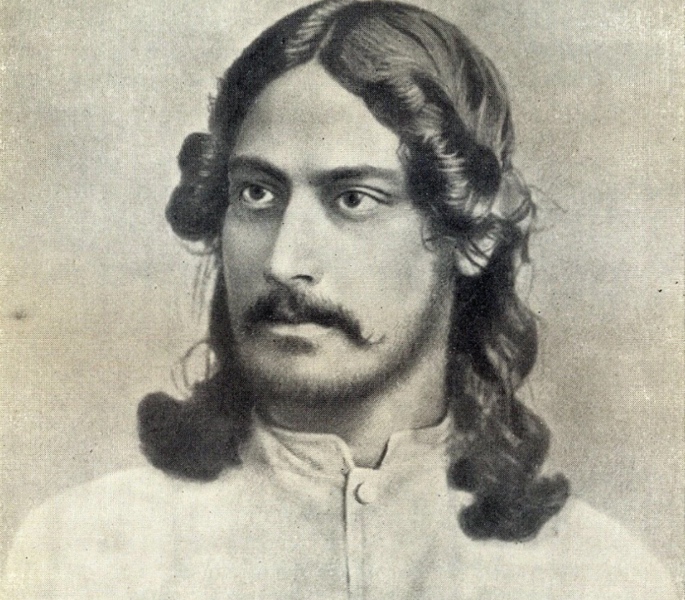 Rabindranath Tagore was born in 1861, Kolkata, West Bengal to a Rahri Brahmin family. He developed a passion for literature as early as 8 years old.

Having 13 siblings, he was born into a family of art-loving creatives. Similar to himself, many of his siblings achieved success as poets, philosophers and novelists.

For instance, his sister Swarnakumari Devi, was a famed novelist while his brother, Jyotirindranath Tagore was a successful musician and playwright.

As a child, Rabindranath Tagore was tutored at home, he did not like formal education.

His resent towards the education system would later be mirrored in his later works.

Rabindranath, tutored by his elder brother, would often be strictly kept at home. His father, Debendranath Tagore, however, travelled for long periods. Rabindranath would also follow his father, having travelled widely himself in his later life.

The young Rabindranath Tagore would often recite the poems he wrote, to people visiting his home. This impressed individuals in the media and arts field, including newspaper editors and mela organisers.

After turning 11, Tagore underwent the coming-of-age rite, called the upanayan. Upon this traditional ritual, he came into close contact with his father, likely for the first time.

He then, along with his father, went on a tour of India, beginning with Santiniketan. Santiniketan was home to one of the many estates the Tagore’s owned.

During Rabindranath Tagore’s tour of India, he studied several books on history, modern science and astronomy. He further read books on classical poetry.

The self-teaching Rabindranath Tagore became influenced by the knowledge he acquired throughout his travels. As a result, he wrote many poems during this period of his life.

For instance, he wrote and published articles regarding Sikhism in Bengali magazines. This was after he visited the Golden Temple during his travels to Amritsar.

Despite his passion for literature, Rabindranath Tagore initially went abroad to study law. This was on the behest of his father who desired Rabindranath to become a barrister.

For his studies, he attended a school in Brighton, England in 1878. During his stay in England, Rabindranath Tagore was introduced to the English culture, thus English literature.

This experience influenced, both, his future writings and literary opinions.

Rabindranath Tagore blended the Western culture he was introduced to with his Eastern roots.

He then moved from the Tagore owned home in Brighton to enrol at University College London.

However, he only stayed in London for a year, therefore, did not complete his law degree. Arguably, this linked back to his detest towards structured education.

Instead, Rabindranath Tagore continued to write and publish his poetry and literary works. He moved back to India in 1880 and pursued writing. 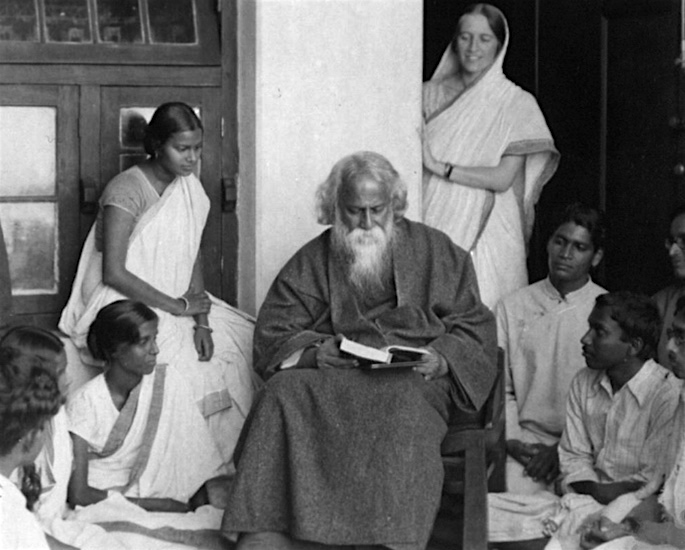 After his return to India, Rabindranath Tagore began publishing many of his poetry books. By 1890, he completed his collection, ‘Manasi’.

This was 17 years after the publication of his first poetry collection when he was only 16 years old.

‘Manasi’, which is Sanskrit for ‘mind’s creation’, included poems relating to romanticism as well as analytical satire towards Bengalis.

The satire in ‘Manasi’, both political and social, is an example of Rabindranath Tagore’s political stance.

At the start of the next decade, he decided to look after the Tagore estates. Many of these estates were in the countryside of Bengal.

Due to living in these rural areas, he felt closer to humanity. Hence, he often based his poetry on his surroundings and experiences.

This impacted his political views and encouraged him towards social reforms, one of the reforms being in the education system.

As previously mentioned, Rabindranath Tagore preferred not to partake in formal education.

As a result, he created an educational institution within Santiniketan, the Visva Bharati University, in 1921.

Thus, politics and social reforms were frequent themes which Rabindranath Tagore presented through his written work many times.

Once Rabindranath moved to the estate in Santiniketan, 1901, he began amassing his literary audience.

While at Santiniketan, Rabindranath Tagore produced several of his literary works and classics which he continues to be remembered for most notably, the ‘Gitanjali’ in 1910.

Due to Rabindranath Tagore’s combined income, he was able to sell numerous copies of his literature, therefore, gaining readers and increasing his audience.

His work gained popularity and admiration of many writers, many of whom were not of South Asian heritage, such as the likes of W.B. Yeats, who also wrote the introduction to Tagore’s ‘Gitanjali’.

This was the start of Rabindranath Tagore’s international recognition.

‘Gitanjali’ is one of Tagore’s most famous collection of poems. It received worldwide recognition, evidently as he won the Nobel Prize award for this work in 1913.

This made Rabindranath Tagore the first non-white recipient to win the award.

He had already become an icon for Bengali literature. Yet the popularity of the translated ‘Gitanjali’, Rabindranath Tagore quickly became successful internationally.

He began touring outside of India, giving lectures to many universities in the West.

Rabindranath Tagore, like his father, travelled across the world. He had visited, approximately, over 30 countries and 5 continents within his lifetime.

Through poetry, short stories, theatre, lyrics and much more, Rabindranath Tagore became an artist of many talents. He used his many platforms, writing and art to change the cultural and social scene of India and Bengal.

The political importance of Rabindranath Tagore was established due to the national anthems of India and Bangladesh.

Tagore had written the song ‘Amar Sonar Bangla’ in 1905. This was when Bengal had been divided into two parts. His lyrics were then established as the national anthem for the newly formed Bangladesh in 1971.

Rabindranath Tagore was against British Imperialism which was a big part of India’s governance during his lifetime. Hence, many of his works were in support of the Indian people and India’s independence.

He had written the poem ‘Bharoto Bhagya Bidhata’ in 1911, which was an ode to India. This poem is presently known as ‘Jana Gana Mana’, the national anthem of India.

As he did not agree with the colonisation of India, the two national anthems demonstrate his support towards nationalism.

His support for India’s independence is shown through the Bengali Renaissance and Swadeshi movement. Both of these events were important in the growth of culture and liberation from the British.

The Tagore family itself were instrumental in the development of literature and arts throughout India remarkably, for being the influence and leaders behind the Bengali Renaissance itself.

Impact on the Bengali Renaissance and Swadeshi Movement 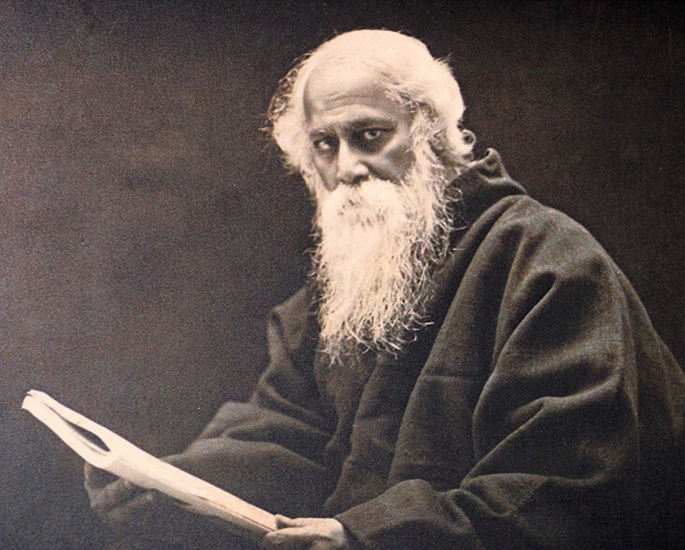 Rabindranath Tagore was heavily active during the Bengali Renaissance. Living in this period, he was able to reshape the cultural and social aspects of Bengal.

The Bengali Renaissance was a social reform movement which began during the British Indian Empire and lasted until the early 20th century.

Rabindranath’s poetry and songs about Bengal were well received. This added to the notion of the Bengali Renaissance.

The Tagore’s placed importance and focus on educational reforms in Bengal. While Abanindranath Tagore led Art reforms, Rabindranath Tagore focused on the expansion of literature.

This enabled the middle-class to enter a new paradigm within literature.

This cut the divide between classes in Bengal and united them in literature most importantly, through culture and education.

This was evident through Rabindranath Tagore’s popularity among all the social classes of Bengal.

The Swadeshi Movement began in 1905 and ended in 1911. It was formed as a result of opposition towards the first partition of Bengal.

The movement was symbolic of Indian nationalism and was part of the desire for Indian liberation.

The Swadeshi movement towards India’s independence was one of the most successful uprisings against the British Raj.

This movement was supported by Rabindranath Tagore. He had written many songs which the Swadeshi volunteers would sing. This was a form of deviating against the British.

Rabindranath Tagore further showed support as he resigned his knighthood as a result of British Imperialism. He had received this recognition from the British in 1915.

Rabindranath Tagore had entered the political world where he often lampooned politics in his works. He had managed to form acquaintances with several political figures throughout South Asia.

For instance, Rabindranath Tagore was well acquainted with Mahatma Gandhi – who was a force behind Swadeshi.

It was Rabindranath Tagore who had given Gandhi the title of ‘Mahatma’. This name continues to be a part of Gandhi’s identity and he is remembered as so.

Despite being against British Imperialism, he was also against the idea of nationalism. Rabindranath Tagore had written an essay ‘Nationalism in India’ and a book titled simply ‘Nationalism’.

He was vocal about his rejection towards the term ‘nationalism’ in its Western context. He denied for a form of ‘nation’ that was man-made. Rabindranath Tagore wrote:

“This nationalism is a cruel epidemic of evil that is sweeping over human world of the present age, eating into its moral vitality.”

He vouched for unity and independence yet was against nationalism as he believed it to be “artificially created.”

His views on ‘Nationalism’ being evil resonated with World War I, which was happening during this time. The war heavily focused on ideas of nationalism rather than the main objectives.

As a result, Rabindranath Tagore viewed nationalism as an issue within humanity, not a solution.

Though he spoke out against these ideas, it was not given much importance as his fictional work.

After his death in 1941, Rabindranath Tagore has remained a significant literary figure.

His works remain celebrated and remembered within South Asia and across the world.

Rabindranath Tagore’s birthday is a special event which is commemorated annually and globally in Bengali communities around the world.

This cultural celebration is known as the ‘Rabindra Jayanti’. Since his fame, the followers of Rabindranath Tagore are known as ‘Tagorephiles’.

Aside from his birthday celebrations, Tagorephiles also observe and attend festivals such as ‘Kabipranam’. This festival is named after Rabindranath Tagore’s album, thus, celebrates his songs and dramas.

Rabindranath Tagore contributed massively towards India and Bengal’s culture. He further developed the art, music, and literature of the region by using his platforms for the greater good which he accomplished through social reforms and writing.

Due to his achievements, his influence and legacy remain beyond the walls of India and Bengal. Rabindranath Tagore continues to be a principal part of many histories.

Anisa is an English and Journalism student, she enjoys researching history and reading literature books. Her motto is “if it doesn’t challenge you, it won’t change you.”
10 Famous Gujarati Authors who Wrote Amazing Books
Kim A. Wagner’s ‘Amritsar 1919’ to be Made into a Film