Hand of Fate 2 presents an unusual spin on RPGs, after a surge of action, MMO and FPS titles. DESIblitz looks at why so many are excited about the game.

You may feel compelled to fight every chance you get - this, however, may end up being your downfall.

Defiant Development delves back into the RPG genre with Hand of Fate 2. A sequel to the original game, it presents a new adventure for players.

The first Hand of Fate offered players a fresh take on the roguelike and deck-building genres. A mysterious and untrustworthy narrator guided you through a journey ripe with trials and tribulations.

Acting as a sort of Dungeon-Master, the cloak-faced ‘Dealer’, provided a charm and iconicity that left a solid impression in players’ minds.

However, the game was not short of flaws – stopping it from reaching its full RPG potential. Following a similar format, will the brand new sequel aim to improve upon these?

DESIblitz takes a closer look at the game and if you should try it out. 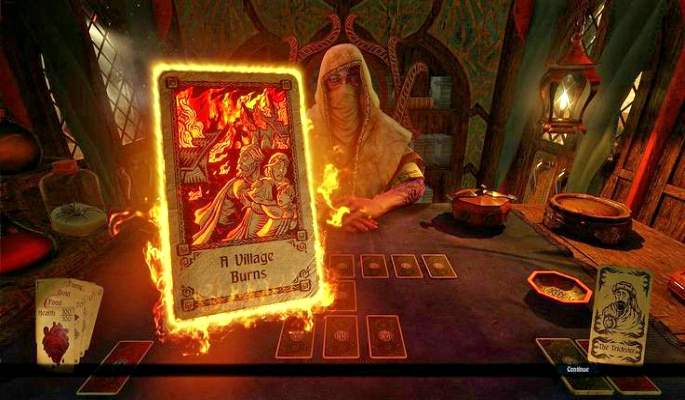 In many ways, one can see Hand of Fate 2 as a ‘choose your own adventure’ style game due to the variety of ways the story can unfold.

Arguably its best feature is the return of the charismatic Dealer. Not only is he a comforting addition to the gameplay, but his wit and charm play an integral role in the title’s distinguishable style.

Throughout each of the 22 missions, you need to pick several encounter and equipment cards from your personal deck. These cards are then mixed with several from the Dealer’s hand to form the base deck.

This, which appears in different shapes and structures as the missions progress, provides a semi-randomized story for you to unfold.

As you move your pawn from one card to the next, you reveal challenges that may or may not help you achieve the mission’s goal. That being: survival.

One can see this as a detriment to the game’s rhythm. Every time you die in a challenge, you are taken back to the start of the mission. It can be especially irritating whilst toiling with some of the harder challenges. However, moments like these give you a great sense of accomplishment, despite them removing some of the immersion. 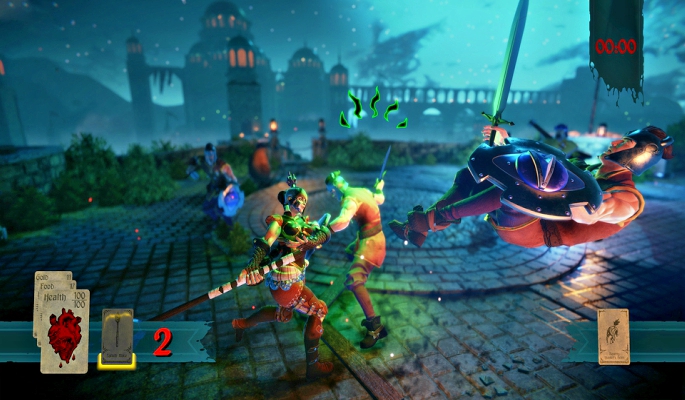 Conflict in the game can be resolved through third-person combat which echoes the styles of Shadow of Mordor and the Batman Arkham franchise. However, avid fans of hack and slash or action/adventure games may feel let down by the simplicity and clumsiness of Hand of Fate 2‘s combat.

You may feel compelled to fight every chance you get – this, however, may end up being your downfall. But when used in the right amounts, combat can offer some satisfying violent relief between the heavy amount of text and table-based games.

Conflicts aren’t just limited to combat. Players can resolve them through gambits involving rolling dice, stopping a wheel of fortune just at the right time and timing a button press perfectly on a pendulum swing

These, combined with the self-contained stories within the challenges, offer a consistently interesting variety of both narrative and gameplay.

One of the key attributes of deck-building RPGs is that they often force players to think tactically. Hand of Fate 2 does this with its own tricky variables.

The most difficult tasks you’re likely to encounter are those that drain all but 10% of your health and removes your way of replenishing it.

Players need to use their skill and cunning they have gathered to work in this dire situation. 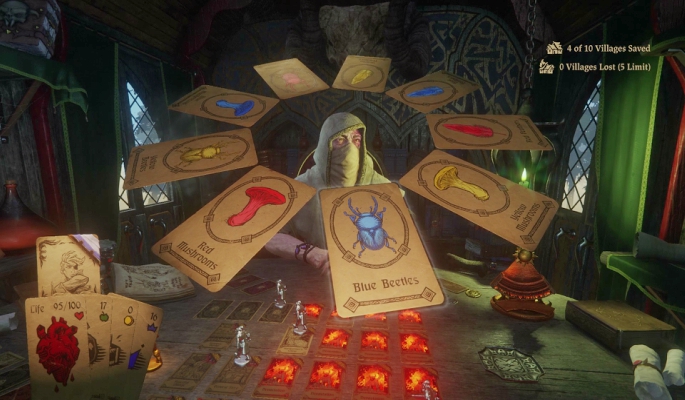 Those who’ve paid attention will realise that equipping encounter cards adds a little extra life. Third-person combat situations, the most health-draining, can be carefully avoided through specific text selections and pawn moves.

However, when combat is unavoidable, it’s important to have the right equipment ready for the fight. To do this you must gather equipment cards.

The game has much more variety in terms of weaponry than its predecessor. Players are no longer limited to just sword and shield. They also have access to two-handed maces and daggers to deal with the wider selection of enemies.

Limited-use artefacts such as traps or damage boosters also diversify combat and can be very useful when fighting off more difficult enemies such as ‘Draknar the Mighty’.

Most useful in combat, however, are the four new companions you can equip. They provide helpful assistance with their different skill sets in the form of brute-like charges and damage shields.

Their special attributes are great to use on the table-top side of the game – keeping the novelty of challenges from drying out. 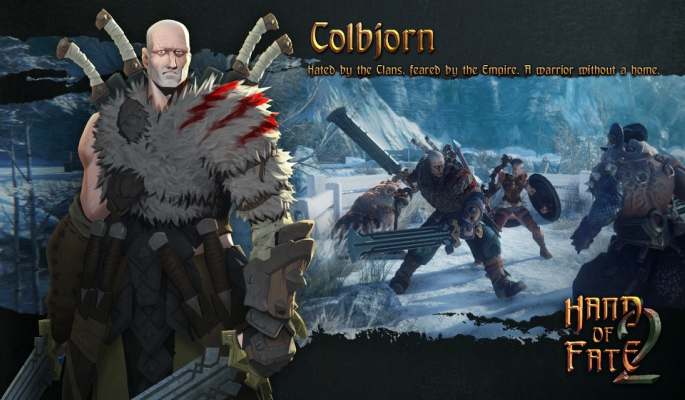 This sequel stands as a solid title, offering a different take on the popular genre.

Its predecessor was a highly original splicing of deck-building and RPG. Whilst Hand of Fate 2 does not achieve anything truly groundbreaking, it succeeds in all of the ways the first failed.

As a result, it helps the franchise achieve what it had originally set out to accomplish.

Most notably, new challenges, objectives, enemy types and weaponry keep the gameplay from getting repetitive.

It’s not free of drawbacks, such as the simplistic combat and sometimes irritating restart of missions upon death. But it truly is a solid RPG experience.

Moreover, it is one that we consider a proud contribution to the genre. Available now, you can purchase it for the PC from Steam, Xbox One and PlayStation 4.