Amazing Cars owned by Bollywood Stars you Have to See

What do the popular Indian actors like to drive? These are the amazing cars owned by the Bollywood stars you simply have to see!

The amazing cars owned by Bollywood stars is a frequent topic, one which either staggers or doesn’t surprise avid enthusiasts as they trawl the internet to find out what their favourite celebrities are driving.

Stars such as Sunny Leone, and Shahrukh Khan all drive expensive, luxury motors and no less is expected of them. After all, who else but the well-loved Hindi actors to convince the public on top, lavish choices of cars?

Who are the avid motoring fans amongst Bollywood? And what are their favourite vehicles to drive?

DESIblitz offers a comprehensive list of what the stars drive around town. 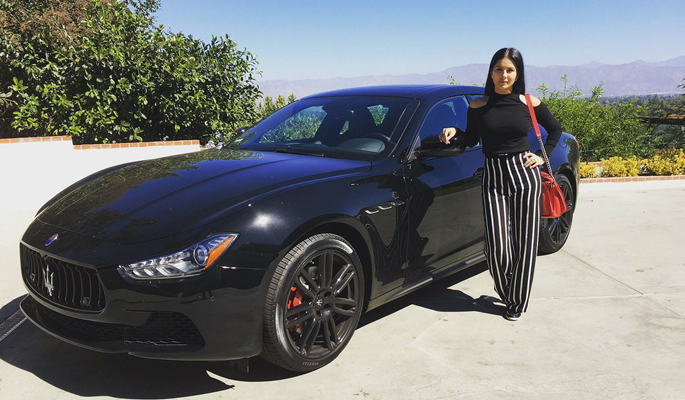 First on the list is the beautiful Sunny Leone, whose husband recently gifted her a Maserati Ghibli. She is known for her luxurious car collecting, and sitting in her garage is a Quattroporte.

If that wasn’t enough, the black grille is big and bold, and very hard to miss in its design. The interior is comprised of leather and wood, but the outside is mostly aluminium, giving the car more control than ever before. 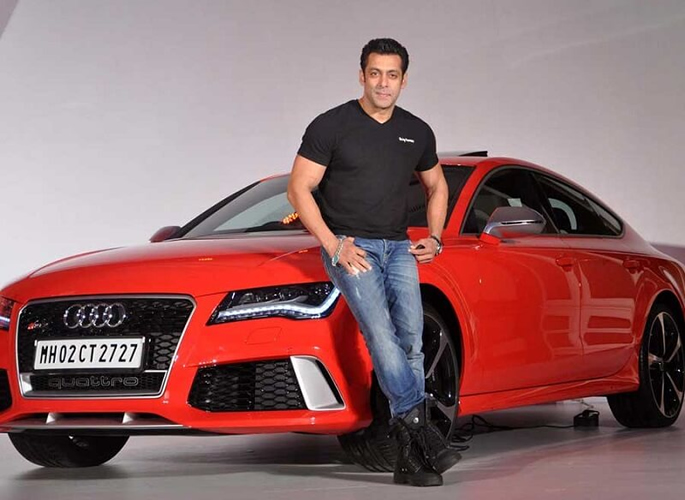 Salman Khan seems to be quite the car fanatic. The top Bollywood hunk owns a number of swanky vehicles.

The sports mode available on this car is arguably the best. Although, it’s not clear which version Salman himself drives.

He also owns a BMW X6. However, he has not been spotted recently in it. This can go from 0-60mph in 4.2s, containing amazing grip, and looking great next to his Mercedes Benz S class. 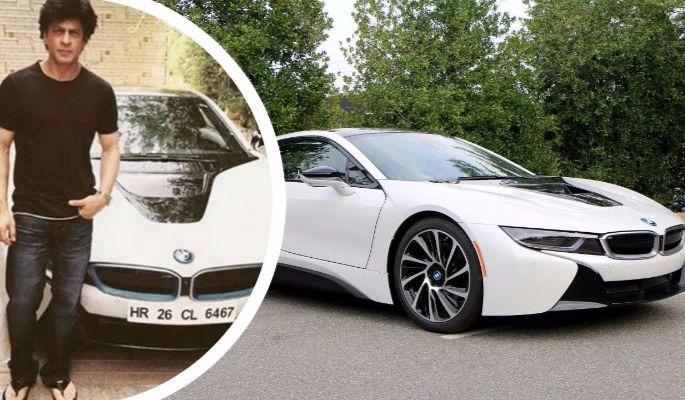 King Khan hails as one of the well-known car enthusiasts on this list because he owns an impressive collection of power-mad motors.

Starting with a BMW I8 sports vehicle, this is actually a best-selling model for BMW and their first plug-in hybrid. This is 1.5-litre turbo cylinder engine, with 228hp (horsepower) and 236 feet of torque. There is even an electric version, although it is not as fast.

To ramp things up, Khan also owns a Bugatti Veyron. An 8.0-litre engine, it contains a staggering 987bhp and 1250nm torque.

It shows real speed from 0-100mph in as little as 2.46s, with a top speed of 430mph. The Bugatti Veyron is the dream of speedy sports car fans, and it just so happens that SRK owns one. 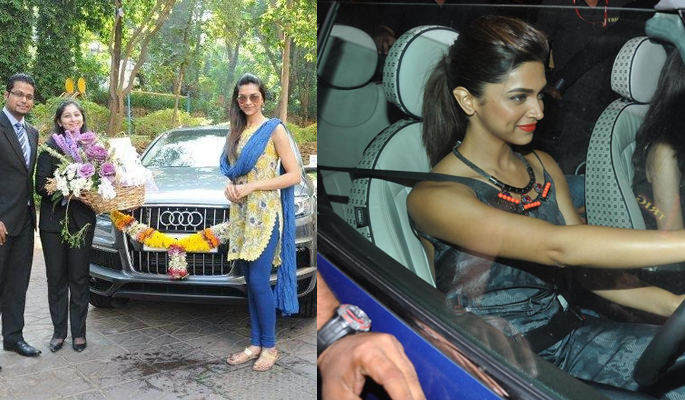 Back to the ladies – Deepika Padukone is more of a simple, yet classy woman when it comes to cars.

The Bollywood actress owns a Mini Cooper. This may come as a surprise to many, but the starlet really likes to keep things low.

Her Cooper isn’t the only car in her garage, though. She is also the proud owner of a BMW 5. The vehicle has an 8-speed automatic gearbox, with a 6 cylinder engine. Its corner resistance braking and stability is said to be gripping. However, the make of Deepika’s is not precisely known.

The 2017 version comes in two petrol ranges, 530i and 540i, whilst the diesel also has two models. Incredibly quiet and sophisticated, this motor is much like its beautiful owner. 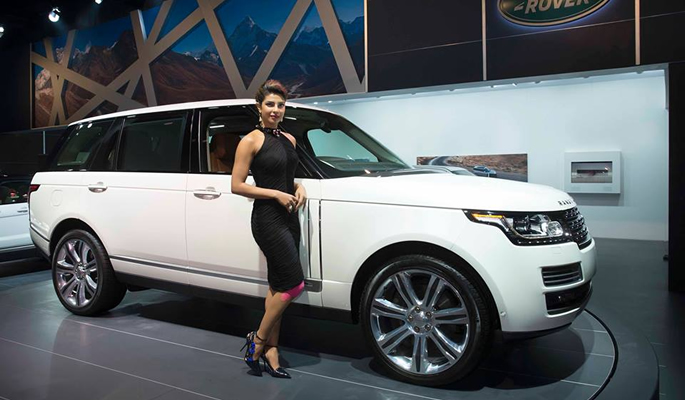 Priyanka Chopra has one of the most luxurious and impressive collections out of the cars owned by Bollywood stars. The celebrity has a customised Rolls Royce Ghost sitting in her garage amongst a Mercedes-Benz, BMW 7, and a Porsche Cayenne.

She allegedly became one of the first Hindi stars to own the Rolls Royce Ghost, said to have cost her Rs 2.5 crore (approx. £291,000).

The 6.6-litre twin turbo engine carries up to 563bhp and can go from 0-60mph in around 4.4s. The Ghost is great for driver aid and predicts gears due to its satellite-aided transmission technology.

With this beast, driving is super fun and all with control at the driver’s command.

Priyanka’s Porsche Cayenne is an extremely well sought after car. The 3.3-litre engine can go up to 260mph, with an amazing 300hp.

This has speed written all over it; even the slowest version will still tickle fans’ senses. The Cayenne is considered to maintain a grip on all roads, even through tight corners.

Suitable for all weathers, it has a panoramic roof and contains ample space inside, even with the touchscreen displays. 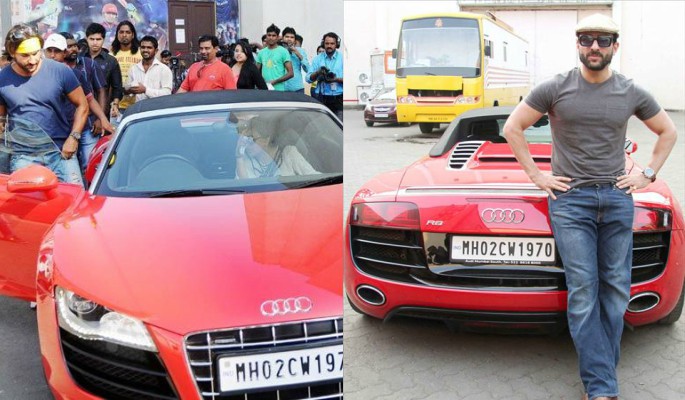 Another Khan who loves his motors is Saif Ali Khan. This Bollywood star owns sports cars to be jealous of.

For example, his Audi Spyder R8 is the very definition of motorsport madness. With 533bhp, this V10 Quattro four-wheel drive builds speed at an alarmingly fast pace, without sacrificing control.

The rev counter has a red light that readies the driver for the start-up of speed. It can go from 0-60mph in 3.3s.

The R8 doesn’t just feel amazing; it looks fantastic, with its folding roof and sleek bold design. This is one of Saif’s incredible vehicles.

Saif also owns a BM7 series, a Mini Cooper, Lexus 470, a Land Cruiser, an Esteem by Maruti, and an American Mustang. 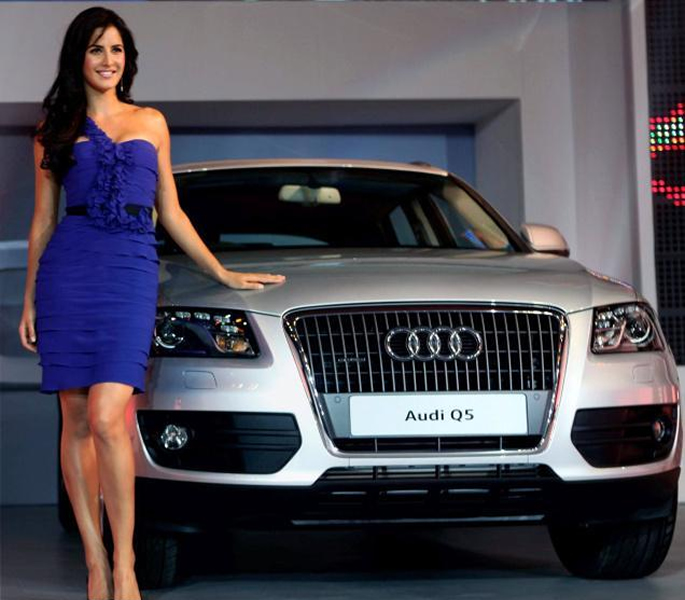 Katrina Kaif is another proud Audi owner, with both the Q7 and Q3 in her garage. 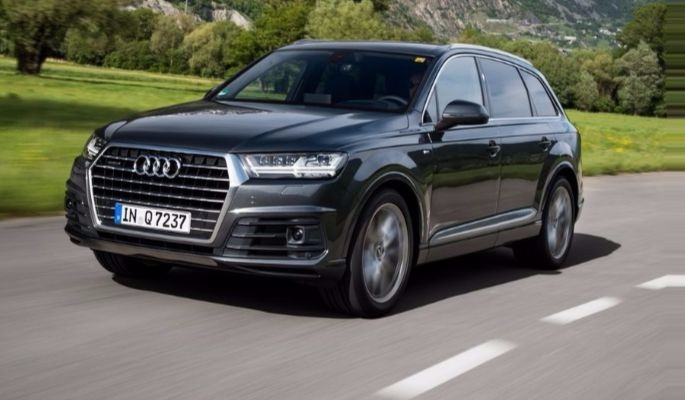 The SQ7 is a twin turbo 4.0-litre diesel engine, with 429bhp. It’s a virtual cockpit inside and goes from 0-60mph in 6.55s. Utterly refined, this is another quiet sounding car fit for a leading Bollywood actress. 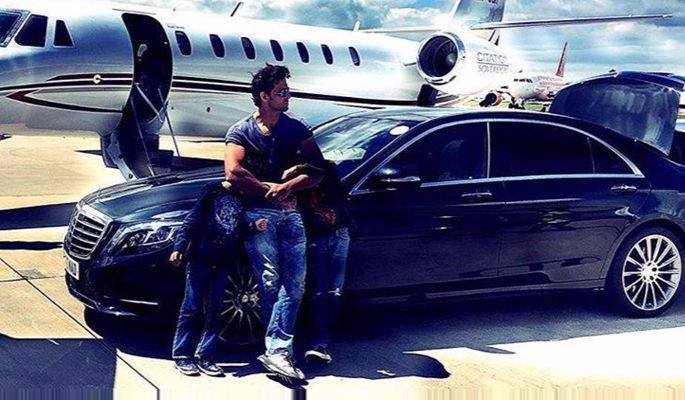 Never one to be outshined, heartthrob Hrithik Roshan is also on the list as he is the proud owner of a Jaguar XJ black edition, a BMW, Range Rover Sport, a Porsche Cayenne, and a Mercedes Benz S. 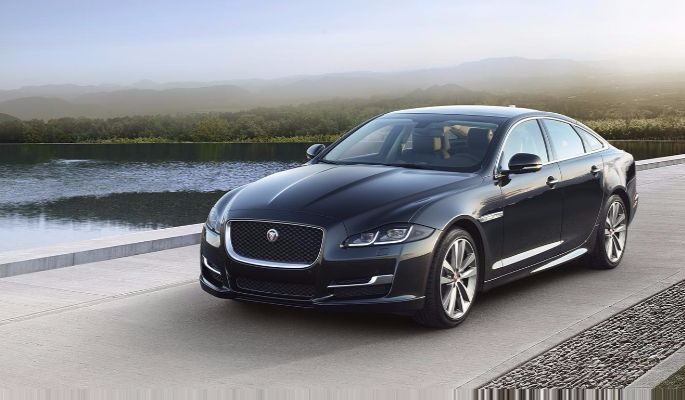 Jaguars have gradually come to weigh less, with the XJ being 40% heavier than even the smaller XF, and still be considered light.

The sight of this black saloon makes a person wonder who’s behind the wheel. The all-black design even includes clad C-pillars, blending in with the rest of the car.

There’s a panoramic sunroof, LED headlights, and plenty of space inside. 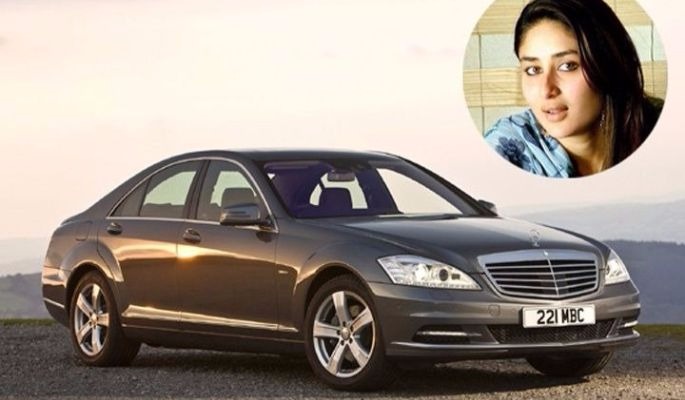 Kareena Kapoor owns two cars, although, the version of each car is unknown. One of these is a Lexus LX 470, and the second is the Mercedes Benz W221 S350 CDI.

Steering on the Merc is electrically assisted, making it easier to use. It can even sense if the driver is getting drowsy, and makes sure that doesn’t happen by making the driver work harder.

The Merc S classes are extremely popular with Bollywood stars it seems. This could be due to the great functionality of them as they’re just good road cars. 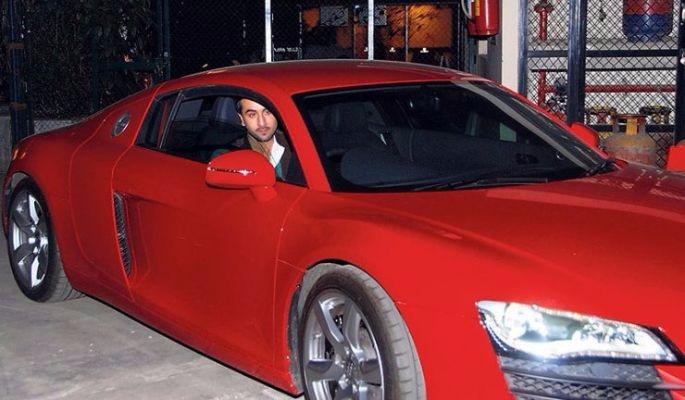 Ranbir Kapoor owns a super sports car. No less would be expected of the Bollywood actor, who steals scenes in every film he acts in.

It’s no surprise then, that his Audi R8 also steals the show. 2017 has a few different variants, but the quickest is the 5.2 litre V10.

It has a mind-blowing 533bhp and 602bhp. The seven-speed dual clutch is definitely not lacking in the speed department.

The launch control takes the car off so quickly, that nobody would have time to talk about the sheer enthusiasm this car seems to portray.

There are 5 modes, with the fastest being performance mode. However, this is best used for circuit and not particularly for normal road driving. The roar of the engine is best heard with this.

Not to mention, the Audi R8 looks mightily impressive! The black panel on the driving side gives it the sporty look it needs. All the curves in all the right places. 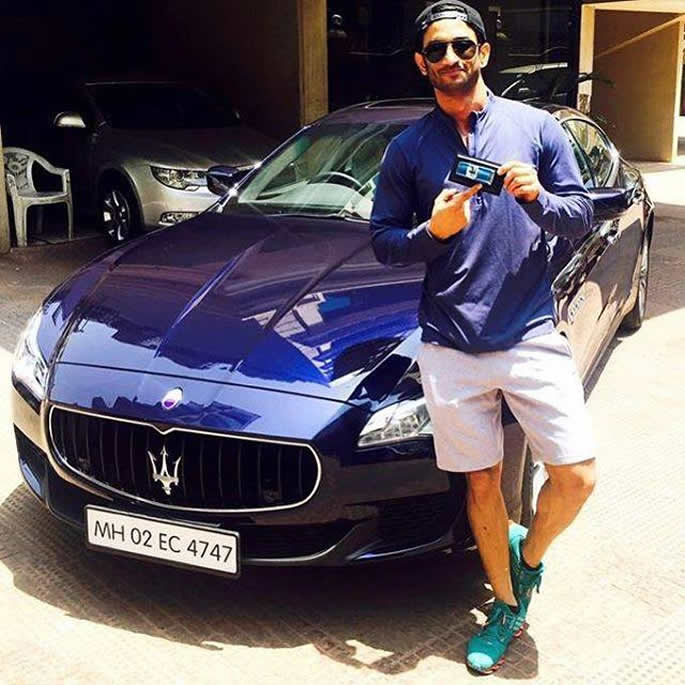 The Bollywood hunk rose to fame with M.S. Dhoni: The Untold Story, in 2016. Following Sunny Leone’s car choices, Singh bought himself the Maserati Quattroporte, in a shimmering blue.

His rumoured girlfriend Kriti Sanon was the first person to sit in the car beside himself. The two have been linked before, but neither has confirmed the relationship.

Singh seems to have finally earned his dream car, as he wrote on his Instagram page: “I’ve been playing with the miniature model of this car since I was a kid. It was about time to own the beast. Who’s up for a drive.??”

Other cars in Singh’s collection include a Land Rover SUV, and a BMW motorbike. 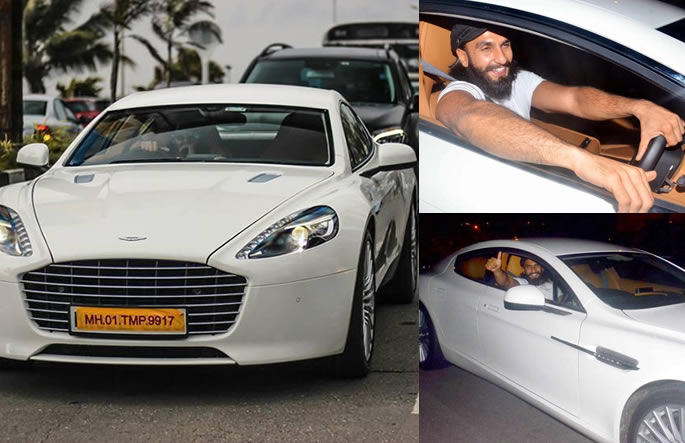 This 6.0 Litre sports car hides a V12 under the bonnet. The fastest can go from 0-60mph in just 4.4s, with a 552bhp. No speed is lost, however, in both the cheapest and greenest versions.

Rapide S is a car made a man who wants to hear the engine roar, much like a sports car should, and Aston Martin has made the Rapide S immensely comfortable and adaptable to drive.

Getting behind the wheel has never felt more secure, the four-door vehicle doesn’t falter or lose grip anywhere, and is considered to have one of Aston’s best steering control.

Whilst its longer, it allows the driver to almost forget it’s a four-door. But, this means any passengers in the back do suffer lack of space, nevertheless, Ranveer loves his sporty cruiser. 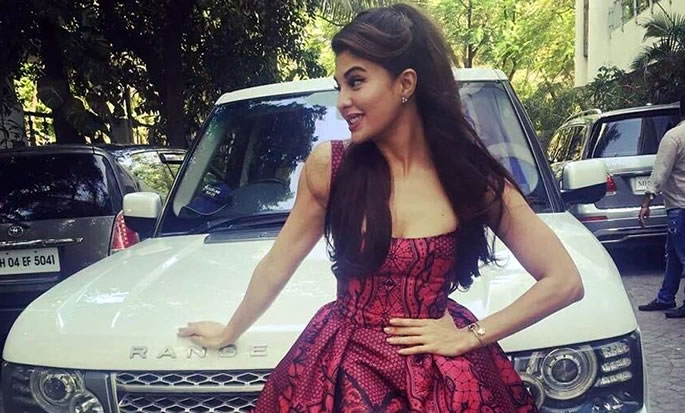 Jacqueline Fernandez is another leading lady with an extensive slick collection of cars fit for no other.

The Bollywood actress owns a Range Rover Vogue, a BMW 5, and a Maybach S500 V8.

The Land Rover Vogue 2017 edition, has six engines including, the super-fast V8, with a 503bhp. With a spacious interior, the updated and slightly pricier versions come with more elaborate features.

The V8 claims a 0-60mph in 6.5s, but the car does not make it known. The Vogue is a much quieter and refined car, even if you turn on the ‘S’ mode and rev it up. A car fit for a refined lady?

That comprises the list of the cars owned by Bollywood stars. Many of these actors have been spotted at least once with the mentioned vehicles. Although the version of each and every model is not known.

Often, car companies endeavour to enlist the help of the stars to attend launches, as the country looks to see who will be the first in a new sports vehicle. As nobody disappoints, the public feel tempted and splurge out on these amazing motors.

One thing that is for certain then – these celebrities and their love for cars are a huge burning factor in Indian sales!

Hand of Fate 2 ~ A Tactical, Diverging RPG
The 10 Most Disappointing Games of 2017