As a Bollywood celebrity, owning a lavish house is a certainty. We look at some of the luxury homes which are owned by Bollywood’s biggest stars.

Being a Bollywood star is almost like being a part of royalty in India in the way they are treated by their fans.

With all the immense wealth that comes with the many films they act in, they spend in one way or another.

Usually, pricey cars are the go-to thing when it comes to Bollywood celebrities splashing the cash.

However, luxury homes are fast becoming the main purchase for them.

As well as owning large homes in India, many Bollywood stars have multiple homes located across the world.

They go to stay at their other properties when travelling to these locations.

As expected, all of these homes are at the pinnacle of luxury to meet the star’s grand expectations.

We look at some of the magnificent luxury homes which are owned by Bollywood celebrities. 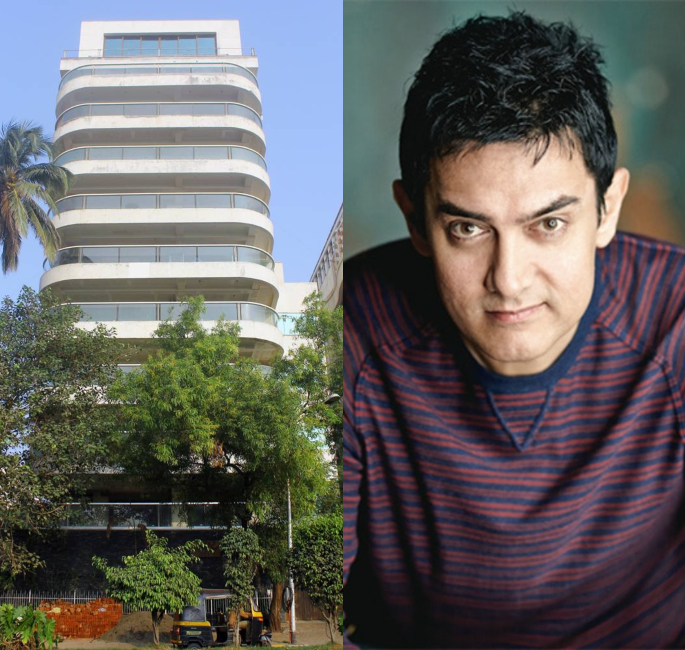 Aamir Khan is considered to be one of Bollywood’s best actors and has starred in blockbusters such as Lagaan (2001) and 3 Idiots (2009).

He is also a Bollywood star that owns a luxury pad.

He initially moved into the apartment while his original home, also in Mumbai, went under renovation.

Months after renting it, Aamir bought the apartment space for an eye-watering Rs. 60 Crores (£6.1 million).

The property covers two floors and faces the sea, making for an amazing view.

Aamir’s mother and brother still continue to live at his original home but the floor space and cost of his apartment just says luxury. 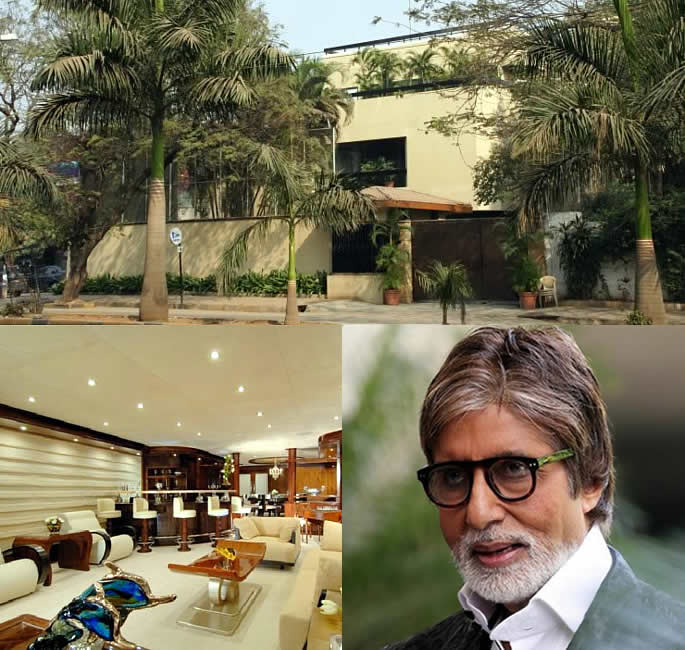 He may be Bollywood’s biggest icon, but Amitabh Bachchan is also somewhat of a property connoisseur.

The actor owns a total of eight houses, five of which are in India.

His luxurious homes include Prateeksha which is known for its lush green lawns. Not much has changed inside but the outside has changed a lot to keep it up to date.

He also owns houses in Paris and Dubai, but it is his Jalsa home which has the most history. 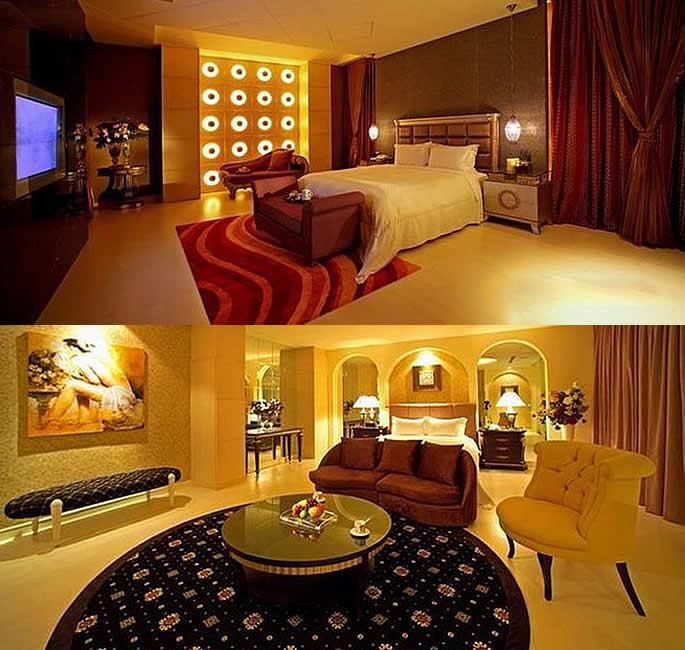 It is the house where he greets his fans outside every weekend in what is now a routine.

The two-storey bungalow has over 10,000 square feet of living space and inside, it is assorted with family photos to give it a distinct character.

Jalsa is Amitabh’s main home, especially because the whole family resides there. 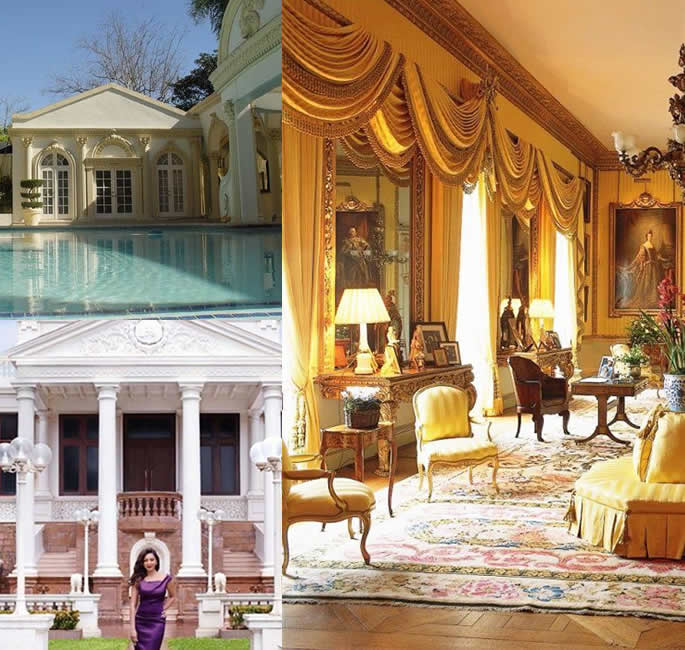 Shahrukh Khan is another actor with multiple properties across the globe, with some in India and even in the UK.

SRK’s well-known home in Mumbai is called Mannat and boasts incredible grounds, architecture, a swimming pool and furniture inside.

This home is full of luxury. Shahrukh bought the heritage site from a trust and renovated it to include every modern amenity you can imagine.

Most people see him waving to his fans from the balcony but inside the home, there are tremendous feats of luxury with no expense spared.

SRK and Gauri also own a lavish holiday home in Beverly Hills in America, where they sometimes spend time on vacation. 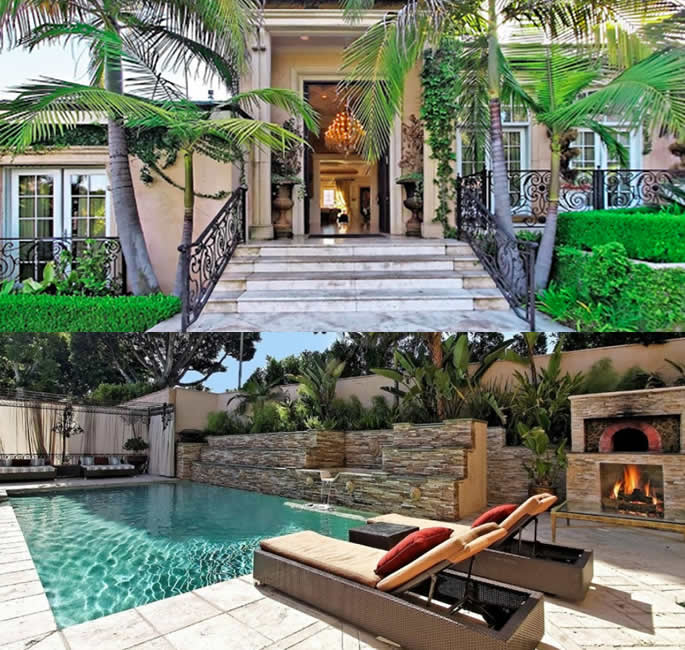 However, his and wife Gauri’s property in Dubai which is one of the most luxury homes owned by any Bollywood actor. 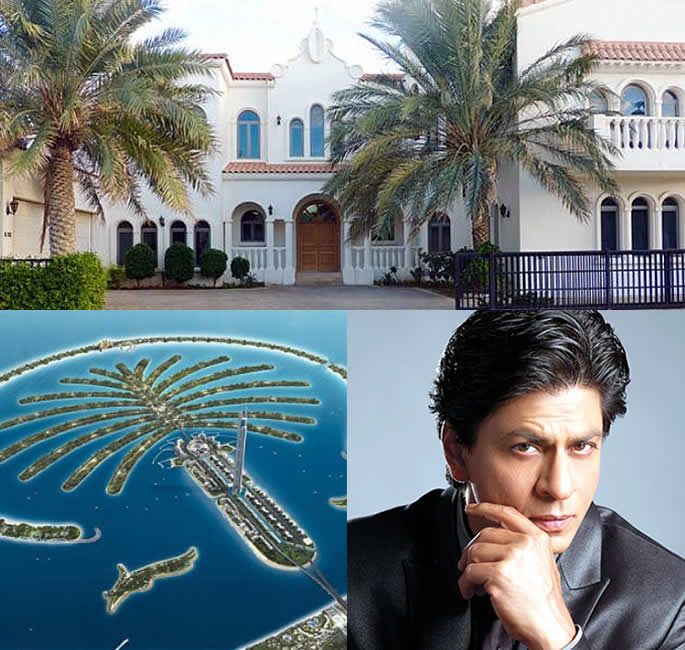 Located on The Palm Jumeirah, the mansion was obtained by SRK in 2007 and is more of a holiday home.

The six-bedroom property has a total floor space of 8,500 square feet and boasts two garages, both of which can be remotely controlled.

As well as the scenic view, it also has a swimming pool.

What makes the property so unique is that Shahrukh and his family have access to a private beach which they can use for their dune buggies.

The house is worth Rs. 18 Crores (£1.83 million) and offers Shahrukh and his family a luxury holiday experience which they can come to anytime.

It truly is a luxury villa which is nothing short of what you would expect for the Badshah of Bollywood. 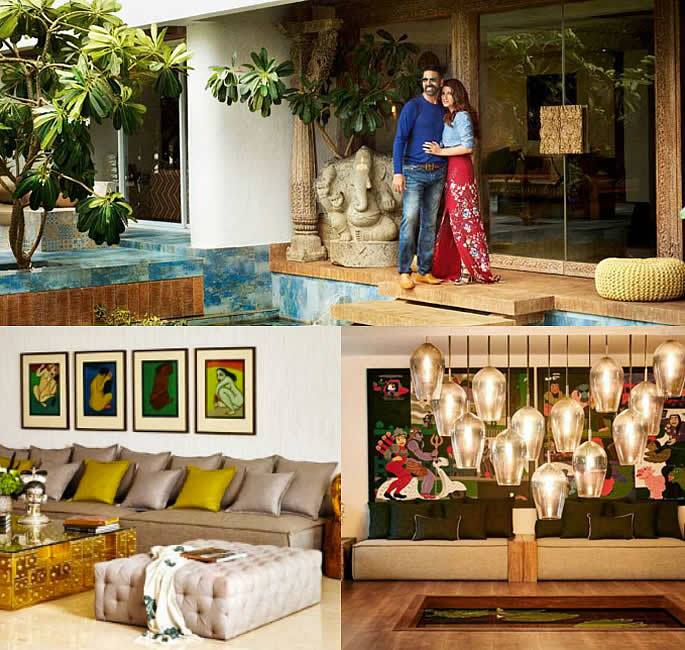 Akshay Kumar and Twinkle Khanna own a stunning house in Juhu, Mumbai which faces the Arabian Sea.

Their home has been created by Twinkle in a way that they present stories.

Throughout the building, it is filled with precious family photos and mementoes collected over the years.

The family home is also full of art, both paintings and sculptures created by European and Indian artists. 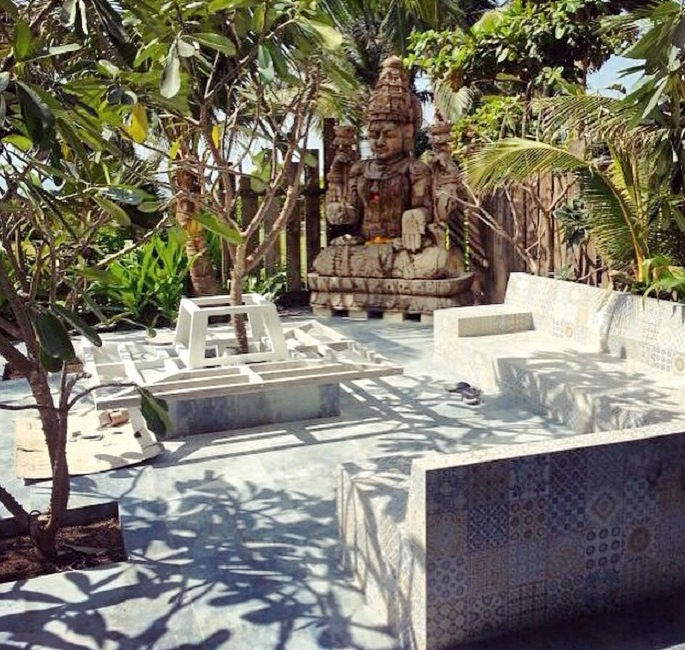 As well as that, Akshay’s house features a walk-in wardrobe, a spacious kitchen and a home cinema.

The best part of the house is the balcony situated outside the bedroom as it overlooks the sea. 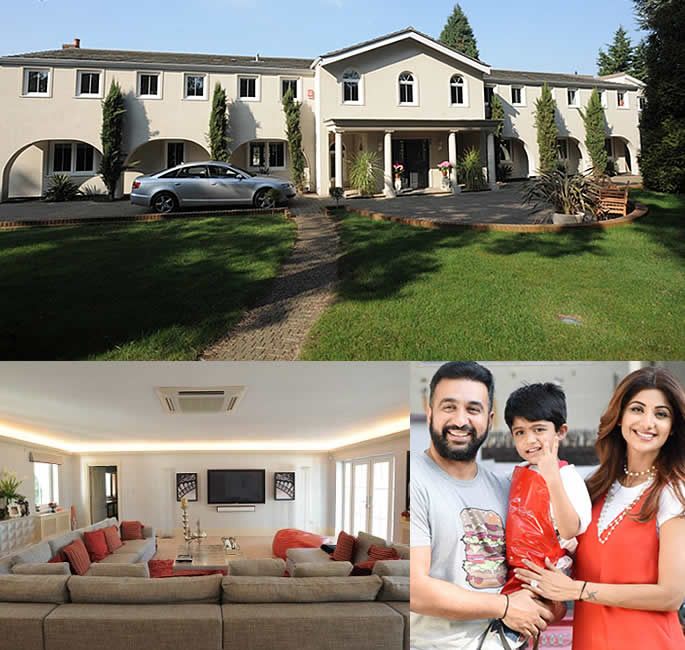 Her mansion called the ‘Raj Mahal’ in Surrey, UK, is the family home where she and her husband Raj Kundra and their son Vivek spend a lot of their time.

The seven-bedroom house has a tree-lined driveway where their car is parked beneath triple balconies.

It makes the most of the impressive view of the garden.

Inside it features two reception rooms and an indoor heated swimming pool as well as a spacious living room.

For added uniqueness, next to the swimming pool is Shilpa’s own bar.

Shilpa’s mansion is one which is more contemporary in terms of the interior design compared to other Bollywood celebrities’ homes. 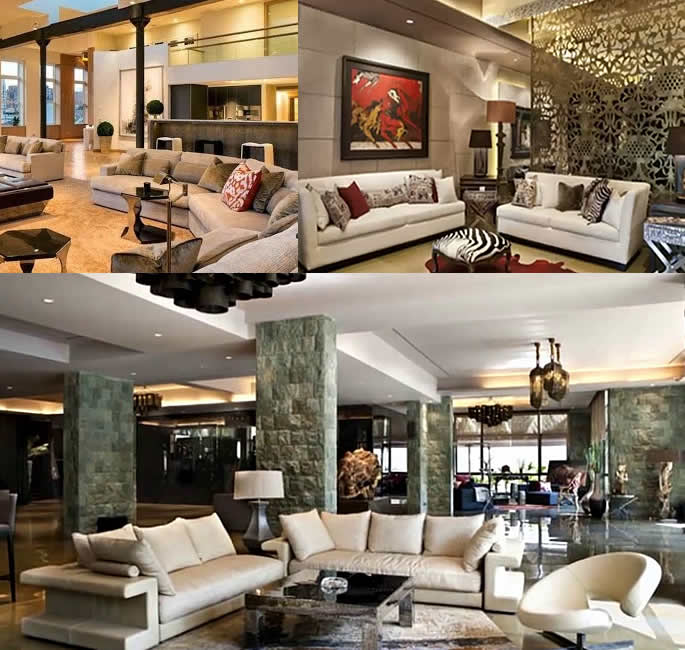 They also have a second home in India called ‘Kinara’, which is a plush seaside bungalow in Juhu, Mumbai. 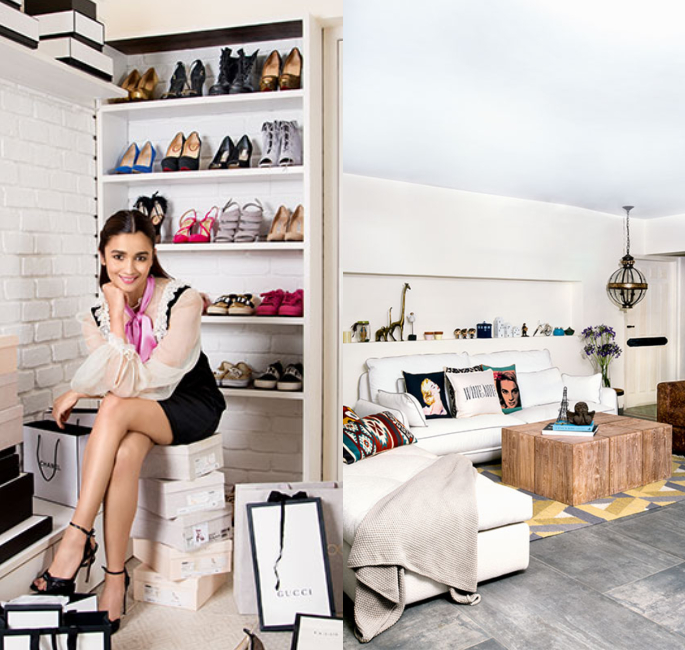 Alia Bhatt is quickly becoming one of Bollywood’s most prominent stars.

Off-screen she is known for stylish fashion sense and now it seems that she is becoming recognised for her luxury home. 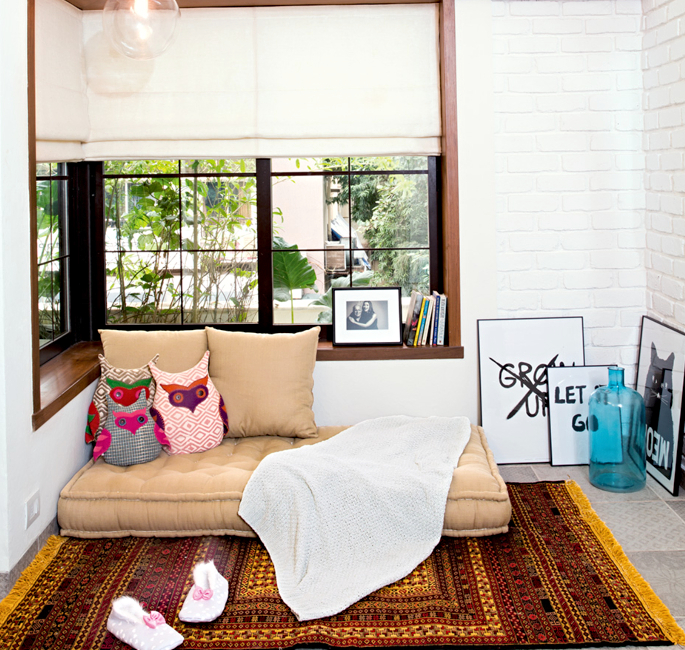 Her three-bedroom home in Mumbai’s Juhu suburb is kept simple as opposed to her hectic life as an actress.

The house has a lobby which is next to Alia’s large living room, complete with comfortable sofas. 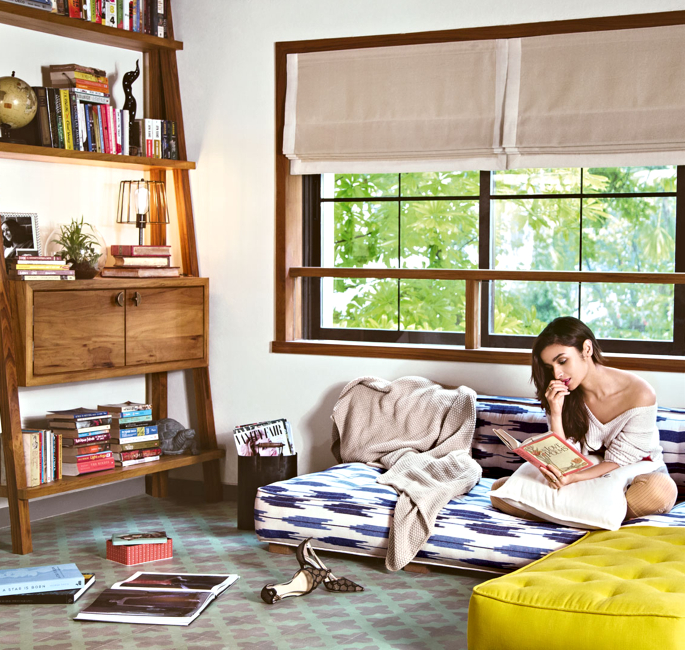 One of the highlights of Alia’s home is a walk-in wardrobe which features a tall shelf dedicated to her shoes.

Multiple renovations have made this contemporary New York style home ideal for one of the fasting rising stars of Bollywood. 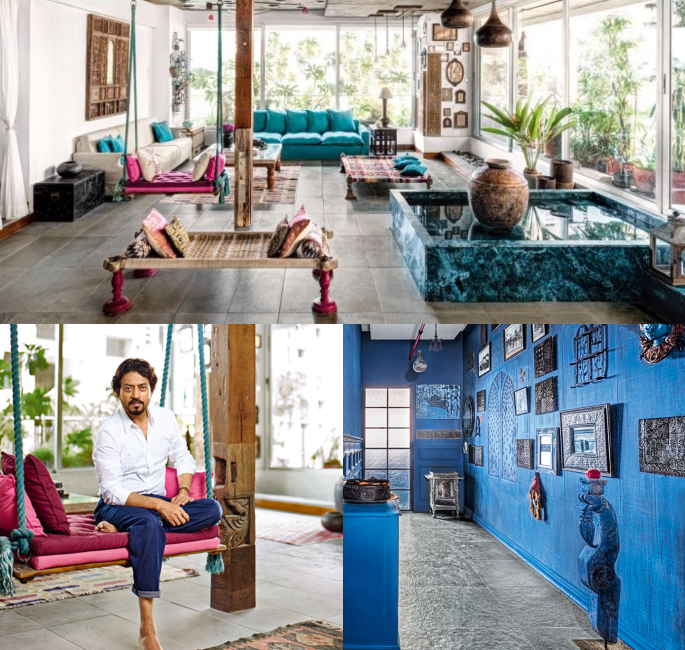 Irrfan Khan is one of Bollywood’s most stylish and bold actors.

It is usually seen in his fashion choices and now it is seen inside his apartment.

Located near Lokhandwala, the interior of his apartment reflects his personality. 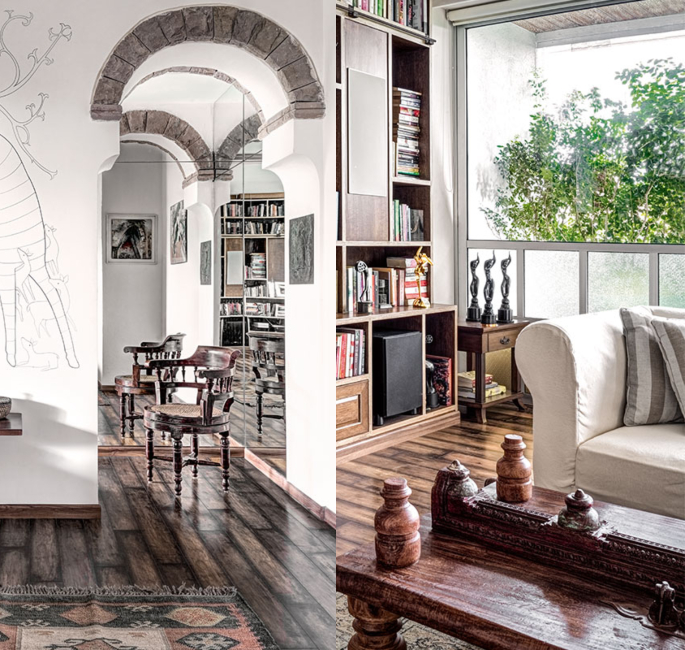 Inside the house features many intricate details, whether it be in the designs of the chairs or the art on the wall.

The open space is full of vibrant colours and everything in it is individual to Irrfan. 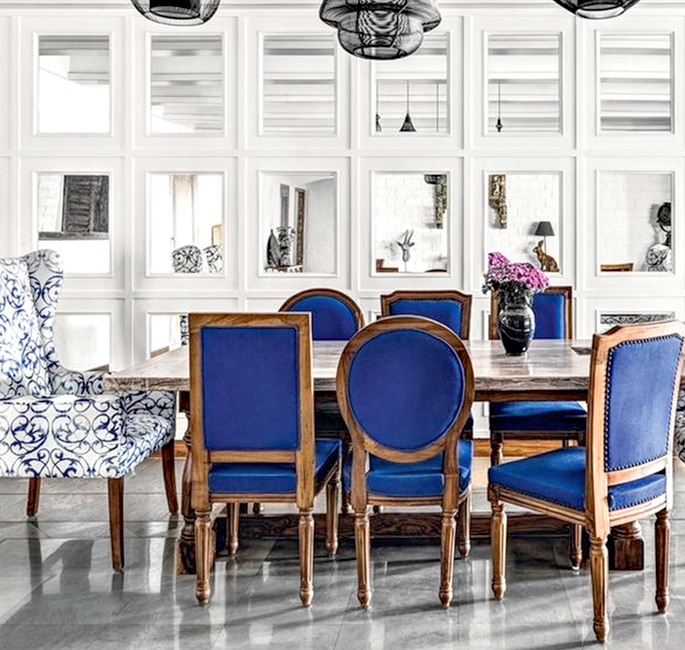 This includes a jhoola (swing) in the middle of the room.

Most of what is inside of Irrfan’s home has been either sent by artisans or custom-made, making his apartment an artistic showcase.

As a result, Irrfan’s apartment is one of the most unique and luxurious homes owned by a Bollywood star. 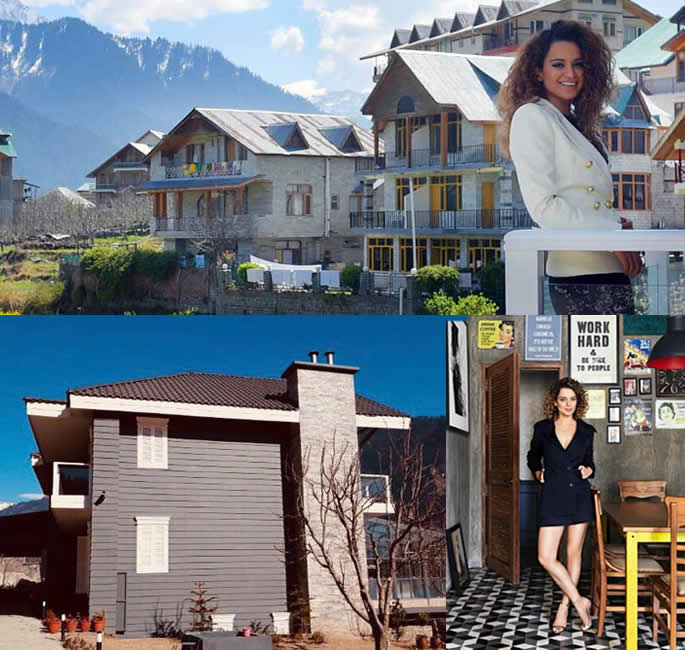 The stunning actress is recognised for her glamorous style and her beautiful home is no exception.

Her Manali house is already unique as it is built 2,000 metres above sea level and has the Himalayas as a view. 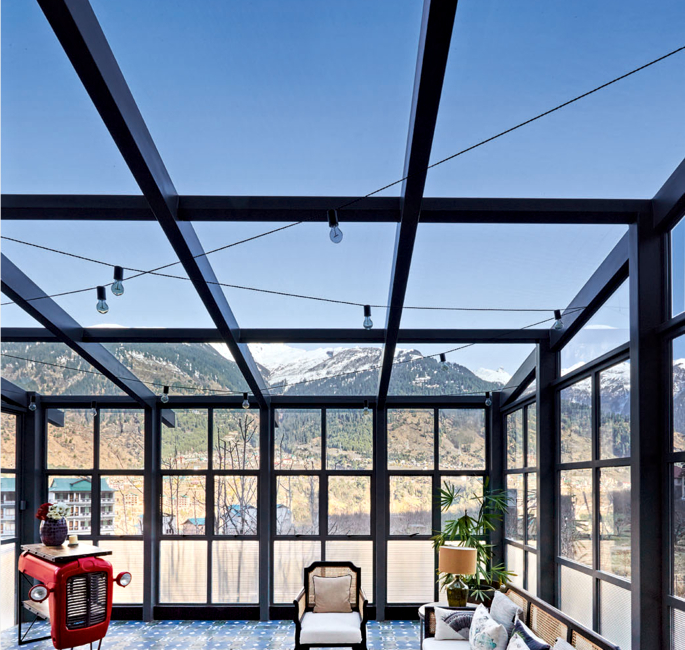 Prior to building the humble abode, Kangana wanted it to be a one bedroom place, but her parents had other ideas.

They persuaded her to take advantage of the land and build a luxurious mansion.

Inside, the design perfectly fits her own bold personality. The interior was worked on by renowned designer Shabnam Gupta, who designed Irrfan Khan’s apartment. 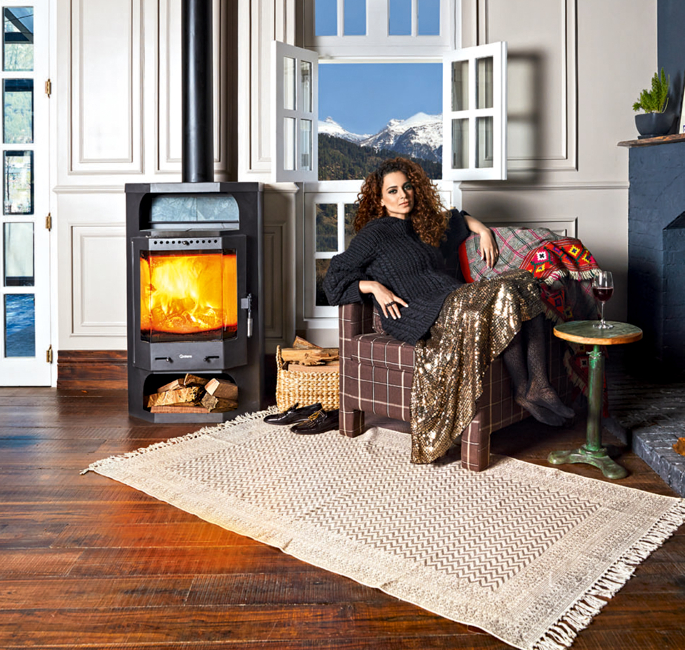 It is also filled with hand-painted wood panelling as well as plaid upholstery and family photos for that homely feel.

Kangana’s Manali home was initially going to be a retreat for the actress but has now become the ultimate party house. 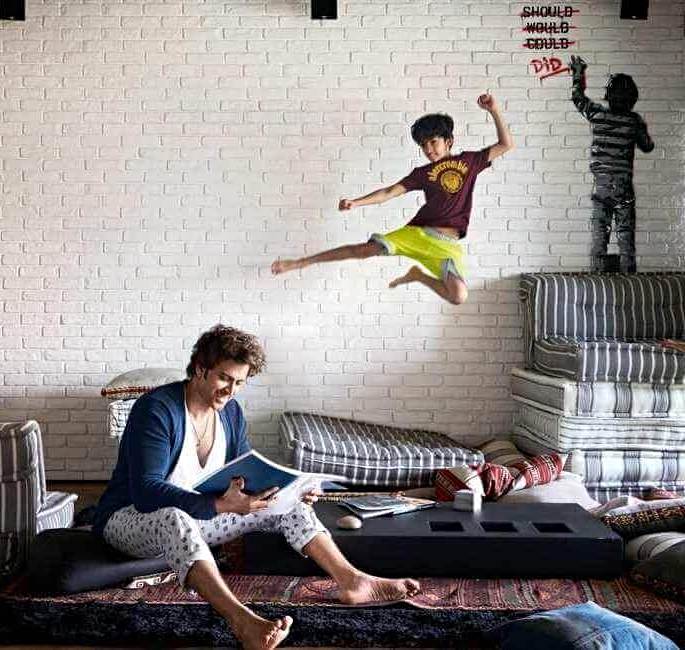 Hrithik definitely has one of the best views to look at in India.

His Mumbai apartment is a breezy affair as it faces the Arabian Sea and is the ultimate bachelor pad. 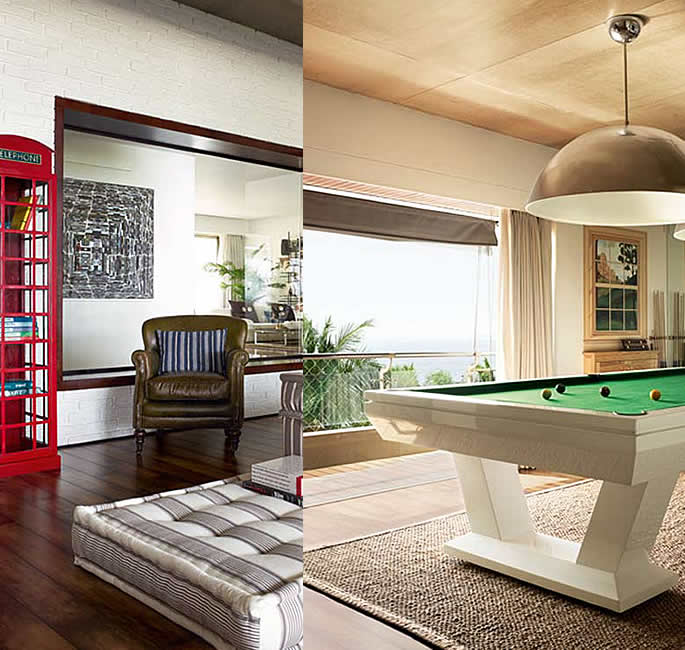 The actor’s home boasts unique luxuries to suit his two sons such as a vending machine which dispenses chocolates.

It also houses a life-size graffiti piece by Daku, one of India’s most famous graffiti artists. 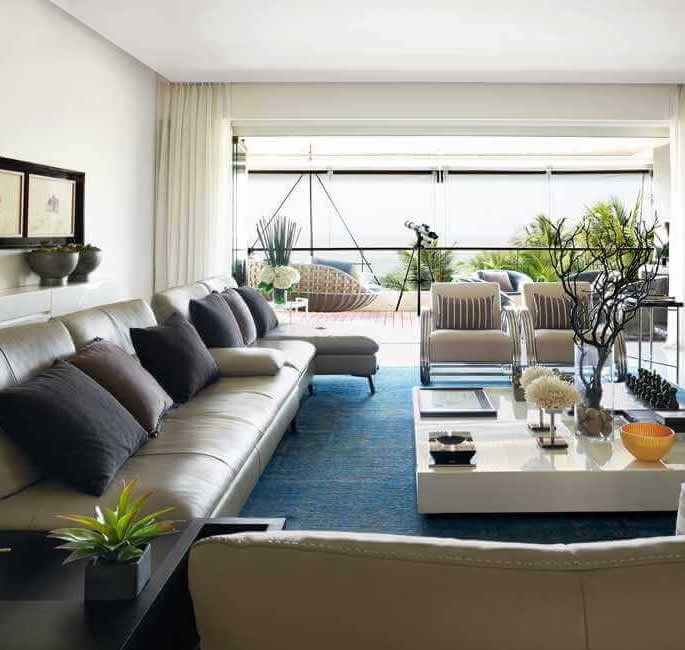 Hrithik’s beach-themed home is filled with modernity, from quirky quotes to a telephone booth shaped bookshelf.

The centrepiece for Hrithik and his boys is a whitewashed brick wall, which he uses to project movies.

Unique pieces of furniture have been imported from other countries to really make his property stand out as one of Bollywood’s most luxury. 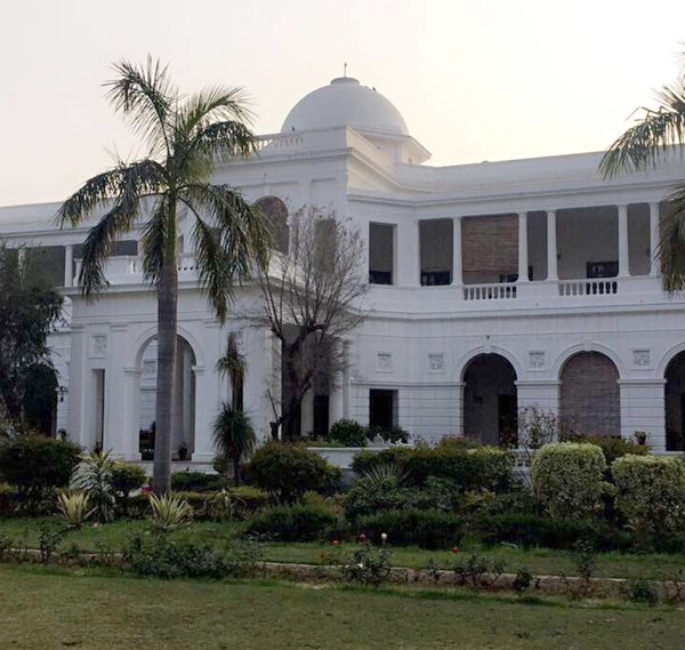 The Bollywood power couple needs a house which is extravagant enough for them and thankfully, they have it.

Saif Ali Khan is the proud owner of Pataudi Palace, which is his ancestral home as it was owned by the Pataudis. 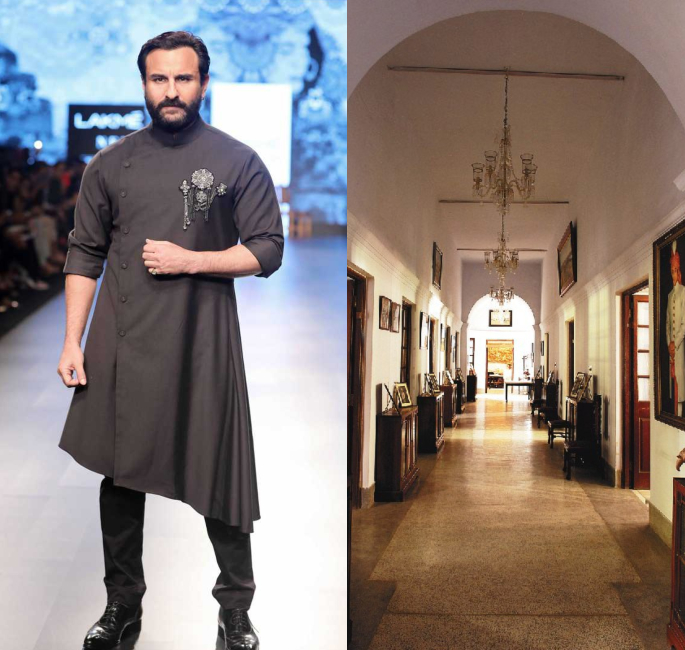 While Saif has other luxury properties like his Fortune Heights in Mumbai, it does not compare to Pataudi Palace.

On the outside, the massive white building is a sight to see and is fit for a Bollywood star like Saif. 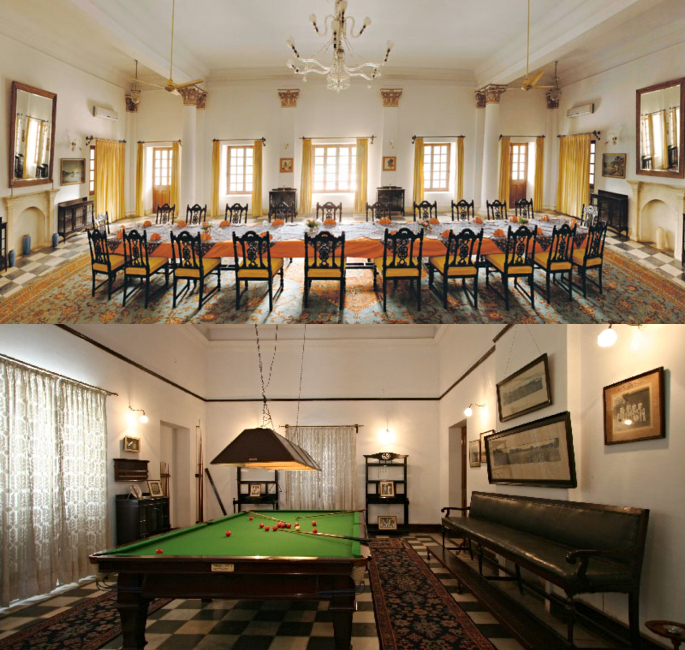 Inside, it is filled with traditional furniture and artwork, reflecting on the Palace’s long history as a royal home.

Each room has been slightly modernised with the inclusion of a pool table while keeping with the ancient heritage like the banquet sized dining table.

The Palace does not have quirky pieces that other stars would have, but the sheer magnitude and history of Saif’s home make it extremely expensive.

It is reportedly worth around Rs. 750 Crores (£79 million) and has also featured in a number of Bollywood films.

While Pataudi Palace is the epitome of luxury, Saif and Kareena prefer staying at their Mumbai residence.

However, during the winter months, Saif and the family stay at the Pataudi Palace.

Bollywood stars own some of the world’s most luxury homes and some own multiple homes throughout the world.

All of their homes are unique and some are influenced by architectural styles.

They all reflect their contrasting personalities, but some things are the same. They are all extremely elegant and some are so expensive we can only dream about owning them.

What to Expect from Red Dead Redemption 2
Is Call of Duty still as Enjoyable as Before?