Incredible Luxury Underwater Homes to be built in Dubai

Residents of Dubai will soon experience the Arabian Gulf in a close, extraordinary way, as lavish, luxury underwater homes will be built in the city.

Brimming with marine creatures, they will experience the Arabian Gulf in an extraordinary way.

Have you ever imagined an underwater home? Where you can gaze upon the beautiful aquatic landscape and its creatures? Well, Dubai will become the first in the world to feature such underwater homes as properties.

The UAE city, known for its breathtaking, modern architect, has embarked on this project with property developer Kleindienst.

Throughout 2016, they have slowly rolled out various editions of these underwater homes. They are located in Dubai’s ‘The Heart of Europe’, just off the coast of the city.

‘The Heart of Europe’ features an array of man-made islands, designed as small reconstructions of the European continent. Part of a large chain of islands, collectively known as ‘The World’, it becomes the first to have Kleindienst’s newest creations.

These underwater homes, named as ‘Floating Seahorse‘, came to fruition in early 2016. This first edition, valued at $2.6 million (approx. £2 million), reportedly involved over 5,000 hours of research and 13,000 hours of design and engineering.

In particular, its underwater section highlights Kleindienst’s expertise of building such impressive homes. Composing of a master bedroom and bathroom, its interior will make up roughly 270 square feet.

And outside, the property’s residents will view a stunning 500-square-feet coral garden. Brimming with marine creatures, they will experience the Arabian Gulf up close and personal. Residents will also view the habitat’s frequent visitor, the seahorse, right from the comfort of their bedroom. 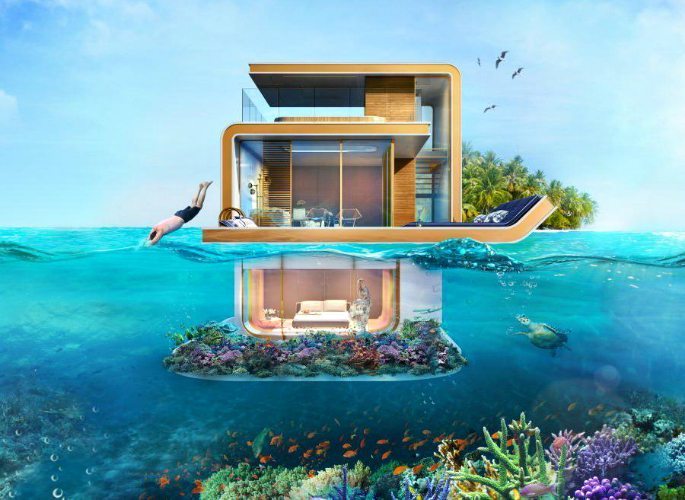 Above water level, the ‘Floating Seahorse’ will also feature a floating bed and an observation deck. Ideal for lounging in the warm, Dubai heat and taking in the glorious views. Residents can travel to and from their home by either a boat or seaplane.

As one can expect, many have welcomed the ‘Floating Seahorse’ homes. Kleindienst revealed that 60 properties had already become purchased back when they first went on the market in 2015.

Over the following year, Kleindienst has also rolled out new editions of these underwater homes. For example, the company unveiled the ‘Signature Edition’, which appears as an extended model and features four bedrooms with smart home functions.

Below the surface, the model includes two bedrooms, a bathroom and a viewing area. Ready for residents to take in the magnificent view of the Arabian Gulf.

Kleindienst hopes their project will set a higher standard for lavish living. They also want to bring attention to the area’s native seahorse. An endangered species, the company plan to restore its population.

They explained: “We will create an artificial coral reef beneath the luxury retreats which will be a protected area in which seahorses can safely live and breed.”

They also plan to create further underwater homes with a value of $3.3 million (approx. £2.5 million). With these attractive properties and ongoing transport technology, Dubai has cemented its status of innovation, as well as luxury.

As Kleindienst continues with their project, perhaps they will also extend into other countries in the future. We’re certain that many would love to view the fascinating marvels of the Sea from their very own homes.

Image courtesy of Kleindienst and The Heart of Europe.

Ban on Petrol and Diesel Cars in UK after 2040
Call of Duty: WWII Private Beta ~ What to Expect