Football and the Rules of the Beautiful Game

Football is one of the world’s most popular sports, played in over two hundred countries. DESIblitz examines the laws that keep the Beautiful Game from turning ugly.

The offside rule is one of the biggest causes of confusion in football.

Football is a popular game worldwide, often described as the king of all sports and is also known as Soccer in North America.

With significant developments in the rules of the game since 1863, we look at the rules which are known the ‘Laws of the Game,’ by FIFA, the governing body of the sport.

A detailed account of the ‘laws’ span almost 150 pages on the official FIFA website. So, we’ve compiled a breakdown of the rules you need to know to follow the Beautiful Game of Football.

Matches are played by two teams of up to eleven players, and must be abandoned if a team cannot field at least seven.

Substitutions of players are permitted during stoppages in the match. 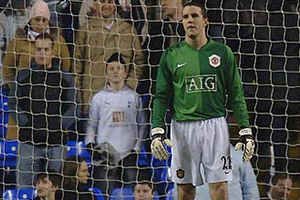 Their have been a number of cases when a team is out of substitutions and their Goalkeeper has had to come off.

In such cases, FIFA allow for outfield players to step up between the sticks, provided the referee is notified of the change.

Duration of the Match

The age old saying that: ‘Football is a game of two halves’ is quite true. Two halves consisting of forty-five minutes each, with a half time interval of up to fifteen minutes.

The referee can add additional time at their discretion to compensate for any stoppages (due to fouls, injuries etc).

To score, the ball must completely cross the goal line between the posts and under the crossbar.

Since 2013, FIFA has employed goal line technology to precisely determine whether a goal should stand.

“That [Lampard goal] was the moment for me to say, ‘You can’t afford for something similar to happen in the next World Cup.” said Blatter 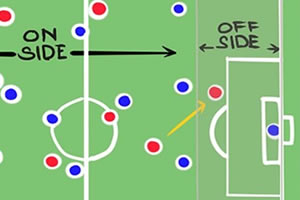 The offside rule is one of the biggest causes of confusion in football.

In simple terms, a player is offside if they are standing behind the last defender but one, when the ball is played to them.

In most cases, the ‘but one’ is the keeper.

However, in cases where the keeper is further forward than the last line of defence, the ‘but one’ extends to outfield players.

To be offside, the attacking player must be in the opponent’s half of the field and a player is not considered offside if they receive the ball in their own half. 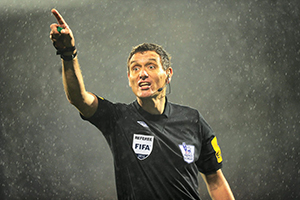 Generally, a foul is any excessive physical contact or tackling the player before winning the ball – e.g. tripping or pushing.

The referees decide whether a player should be cautioned for a foul, by showing them a yellow card. More serious offences are shown red, with the offending player being sent off.

A brawl during a match between Recreativo Linense and Saladillo Algesiras in Spain led to the game being abandoned. A record nineteen red cards were handed out in the dressing room.

If a player is fouled inside the box area, a penalty is awarded instead.

Occasionally, a team may be awarded an indirect free kick, inside the penalty area. These are typically awarded when a player passes the ball to their own goalkeeper who then handles the ball (called a pass-back), instead of playing it with their feet. 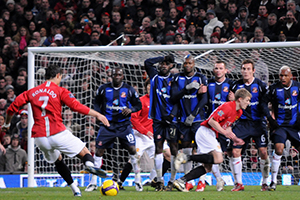 The opposition must be a minimum of ten yards away from the ball during a free kick.

At the 2014 FIFA World Cup Brazil, referees indicated how far the opposition had to be using a white spray which faded over time.

Germany has banned the spray in the Bundesliga, labelling it as a health hazard. However, Heine Allemagne, the inventor of the spray slammed the ban, accusing the Germans of “maliciously reporting something that isn’t true.” 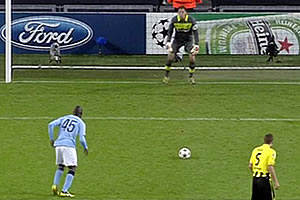 Possibly the most famous ‘spot’ in sporting history, the oblivious white dot is often featured in debates as managers, fans and referees weigh in on the ‘was it, wasn’t it?’ debate.

Awarded when a player is deemed to have been fouled inside the penalty area, penalty kicks are usually considered a free shot on goal.

The opposition (excluding the goalkeeper) must stand outside of the penalty area whilst it is being taken.

However, their have been occasions when teams have tried to dupe the goalkeeper by passing the ball from the penalty spot.

As long as the ball is played forward this is considered legal.

A full Laws of the Game list can be found here. It covers the field of play, the ball, equipment, referees, start and restart of play, throw-ins, goal kicks and corner kicks.

Zak is an English Language and Journalism graduate with a passion for writing. He is an avid gamer, football fan and music critic. His life motto is “Out of many, one people.”
Raj Hundal ~ World Pool Masters Champion
Indian Footballer Dies after Goal Celebration