Pupils from Eden Girls School have won the Enterprise Challenge 2016. The national competition is run by HRH The Prince of Wales’ mentoring charity, Mosaic.

Eden Girls School in Waltham Forest, London, are the proud winners of the 2016 Enterprise Challenge competition after their team of young entrepreneurs, S-MART, beat five other schools from all over the UK.

The prestigious competition is run by the national charity, Mosaic, which is mentored by HRH The Prince of Wales. Enterprise Challenge is also sponsored by Apax Foundation and Qatar Charity UK.

Its aim is to inspire secondary school pupils across the UK to develop key skills and aspirations that will encourage long-term employability in some of the most deprived area of the UK.

The national competition sees these students work closely with mentors from the business community to encourage them to develop viable business ideas that are both innovative and exciting.

The winning team, S-MART, were deserving victors after they impressed the panel of judges with an idea for a secure online trading portal for students.

Available for students across the country, pupils can buy or swap items from unwanted school books to their own art pieces.

Hosted at the offices of Hogan Lovells LLP in London and compered by ITN’s Charlene White, the Grand Final of the 2016 Enterprise Challenge also welcomed well-known keynote speakers from the business world.

Of them included successful entrepreneur and former BBC Dragon’s Den investor, James Caan CBE. Caan was joined by 18-year-old Solomon Ian-Sangala who has been named one of City AM’s 100 most influential entrepreneurs in the UK.

Addressing students, teachers and guests, Solomon said: “It’s been a brilliant day. I’ve learnt so much from people even younger than me! All the teams were very impressive and showed why in business teamwork is the most important skill you can have. 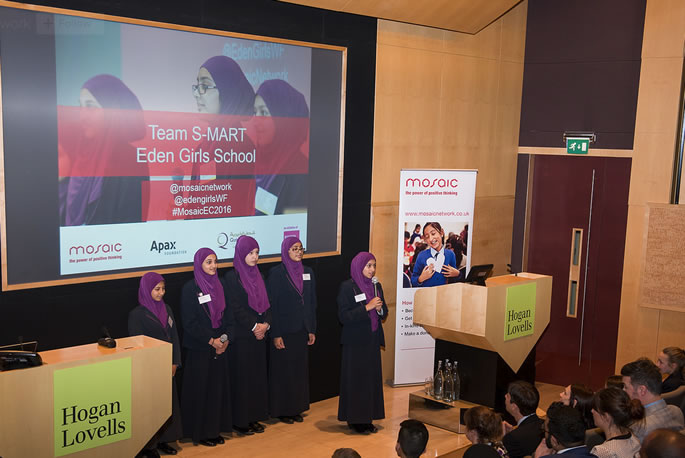 “They also all knew their numbers which is a skill that I didn’t have when I started my business. I think all of the finalists could have a bright future in business.”

Team S-MART, who sailed through the regional finals to qualify for the Grand Final, narrowly beat Team Hand-Up from Dixon’s Academy in Yorkshire and Team Eazo Peazo from Rivers Academy in Feltham into second and third place respectively.

Made up of 5 pupils from Year 7: Mahriya Zahid, Yusra Faisal, Maria-Lilya Abbas, Sumayyah Bhana, and Misba Mullan, S-MART is also the youngest team to have ever won the Mosaic accolade.

A remarkable achievement, their win indicates the great ambition of young entrepreneurs from the British Asian community.

The team were awarded £2500 for their school and a £500 seed fund to help make their winning idea a reality.

Ecstatic with their win, pupils from Team S-MART said: “We just can’t believe it. This feels like a dream. We worked really hard with our mentor on the idea and we knew it was good.

“But to win is just amazing. The competition has taught us so much especially about being confident when standing up and talking in front of other people.”

Their Eden Girls School teacher added: “The girls have been relentless and have worked every possible hour on their idea. All of us at the school are so proud of them. Their mentor was absolutely brilliant and worked very hard with them, not just on the idea itself but also on presentation skills.” 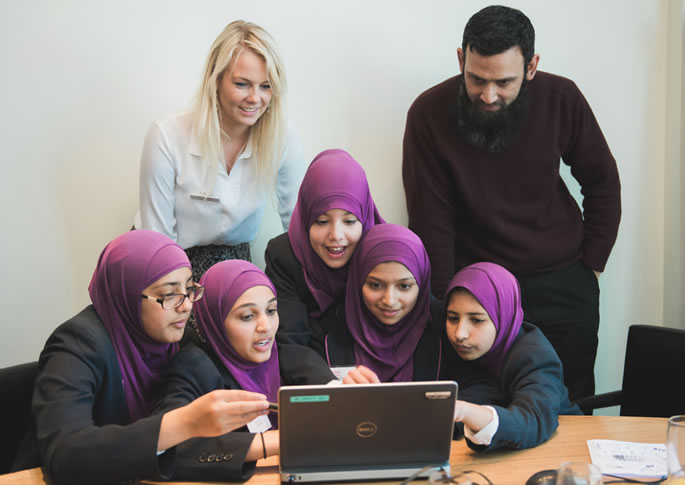 The five students from Eden Girls School were photographed holding their trophies with MD of Mosaic, Jonathan Freeman, and Chair of Judges, Mohamed Amersi. They also had a chance to celebrate their win with a helicopter ride over London.

Following the Grand Final, all of the teams were treated to a trip on The London Eye, a Duck Tour of the Thames, plus a special visit to Harrods.

It is evident that Eden Girls School are enjoying a proud moment after winning Mosaic’s tough competition.

The charity, Mosaic, which was founded in 2007 by HRH The Prince of Wales has been striving to inspire young people from difficult backgrounds and deprived communities and encourage them to pursue their potential.