Debangg, the ‘fearless’ movie produced by Arbaaz Khan has made Bollywood history. Featuring Salman Khan as the hero, the film has surpassed Amir Khan’s ‘3 Idiots’ the previous film to break box office records in India.

"The opening day collections are tremendous."

The Bollywood movie ‘Dabangg’ made its way straight into the Bollywood record books on the first day of release. Superseding takings for Amir Khan’s ‘3 Idiots,’ this Salman Khan masala movie grossed over 480 million rupees ($10.4 million) on its opening weekend in India – September 10th-12th 2010. It is the highest opening day grosser as well as the highest weekend grosser to date, at the Indian box office.

This has brought Salman Khan into limelight in a very massive way, giving him and his brother Arbaaz Khan, who produced and starred in the film, something to be extremely pleased about. The overall budget of the film is Rs. 30 Crore and the return on it is very healthy.

Dabangg is directed by first time director Abhinev Kashyap, who narrated the original story of Dabangg to Arbaaz Khan. And Arbaz who heard the script for over 40 minutes, realised that it was the first project waiting to be produced under the ‘Arbaaz Khan Production’ banner. He took it to Salman Khan who firmly agreed that it should be a family in-house production and subsequently, engaged into the movei as its hero, which Salman says was important since it was Arbaaz’s first production. 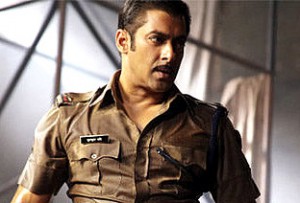 Debangg which means ‘fearless’ is about a corrupt cop, Chulbul Panday (Salman Khan) who is fearless, arrogant and makes his own rules. Set in Lalgunj, Uttar Pradesh, the story portrays the complexity of Chulbul’s relationships after having a bitter childhood, losing his father early, having to experience the re-marriage of his mother Naini (Dimple Kapadia) to Prajapati Panday (Vinod Khanna) who subsequently have another son, Makhanchan (Arbaaz Khan) – favoured by his step dad.

The story continues to the stage where Chulbul breaks all ties with family and meets his love interest Rajo (Sonakshi Sinha), who turns his world upside down in her own unique and positive way. But he has detractors to deal with, especially Cheddi Singh (Sonu Sood) who plays Makhanchan against Chulbul. And the value of family is tested with lots of masala, hit songs and dance sequences. The film also stars Om Puri, Anupam Kher, Tinu Anand and Mahesh Manjrekar. 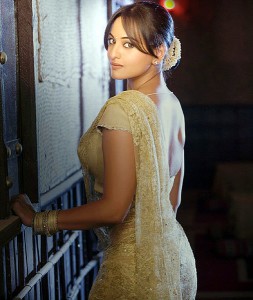 Daughter of the veteran Bollywood actor, Shatrughan Sinha, Sonakhshi Sinha plays the role of the heroine, Rajo. Her selection for the film came about after Salman Khan met her at a fashion show where she was issuing tickets for the event, as a student. Salman then spoke of Sonakshi to Arbaaz at a music sangeet event which she also attended. Arbaaz had only seen Sonakshi in the past when she was overweight and could not see her playing the role. But after seeing her and meeting her, he was convinced with Salman’s choice.

Sinha went on a special diet and trained for two years in order to get into shape for her role as Rajo. Salman said the the role of Rajo was very pinnacle to the film because she had to portray to the public that a son should marry and bring her type of a girl home. Hence, playing the ‘ideal’ daughter-in-law, wife and partner for the hero, Chulbul.

One of the key differentiators of Dabangg is the action content. The film is jam-packed with lots of modern style ‘dishoo dishoo,’ very well performed stunts and hero charisma on the screen. Vijayan is the fight master/action choreographer for the action scenes of Debangg. Proud of the action scenes in the film, Arbaaz said, 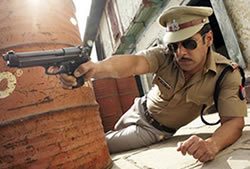 Films with lots of action content do not usually fare well in multiplexes but Debangg seems to have opened the doors for such films to be in fashion once again. Bollywood trade analyst, Amod Mehra, places Debangg in the league of the 1970s trend of action-packed entertainers and said, “All Amitabh Bachchan starrers like Amar Akbar Anthony, Muqaddar Ka Sikander and Sholay were films that had huge action packed with loads of entertainment,” predicting that Debangg will revive that era.

The songs from Dabangg also have been a major hit. The soundtrack of the film was composed by the music director duo of Sajid-Wajid and Lalit Pandit and the lyrics by Faiz Anwa. In August 2010, the song “Tere Mast Do Nain”, as performed by Rahat Fateh Ali Khan, reached Number one on the Official Asian Download Chart in the UK based on legal downloads. Other hit songs include, “Munni Badnaam,” “Sachi Sachi” and “Hud Hud Dabangg.”

Dhilin Mehta, CEO of Shree Ashtavinayak – the financial producers of Dabangg said, “The opening day collections are tremendous. We have surpassed the collections, which were there as far as the previous films are concerned—the blockbusters films. We were on the money on the first day itself and whatever upsides we are adding to the revenues as well as the bottom-line.” 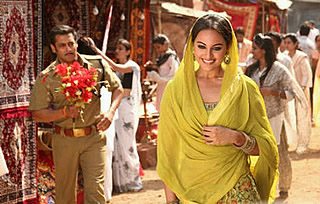 The movie has definitely been a hit with Indian audiences who have liked the film for its more ‘traditional’ Bollywood flavour and masala touch. Suniel Wadhwa, distributor of the film said, “Dabangg’s first-week net box-office collection is the highest ever figure for an opening week. It has surpassed all major circuit business, leaving 3 Idiots behind with big margins in Delhi, UP, east Punjab and Rajasthan.”

Dabangg may well be the movie that was needed by Bollywood to resurrect audiences that are still very much interested in family, masala action and hero orientated films. Possibly giving Bollywood a path away from just producing very modern films with perhaps too much westernised content. So, if you want a taste of ‘real’ Bollywood, Debangg should be one to watch.

Amit enjoys creative challenges and uses writing as a tool for revelation. He has major interest in news, current affairs, trends and cinema. He likes the quote: "Nothing in fine print is ever good news."
Love, Sex aur Dhoka – Bollywood Voyeurism
Bollywood Gay film faces Censors