Death Stranding is an upcoming open-world action game which is one of 2019’s most anticipated and strangest videogame releases.

He is Sam Bridges and players will take control of him

It is an action game which is published by Sony Interactive Entertainment (SIE) and developed by Kojima Productions.

The game is much anticipated especially because the developers have been working on it for a number of years.

Its obscure story is also intriguing for gamers not to mention the all-star cast who are in the game.

Gamers have had to wait a long time for Death Stranding, but the trailers have indicated that the game will be a masterpiece especially as it is being helmed by videogame auteur Hideo Kojima.

Here is what to expect from the game before it releases. 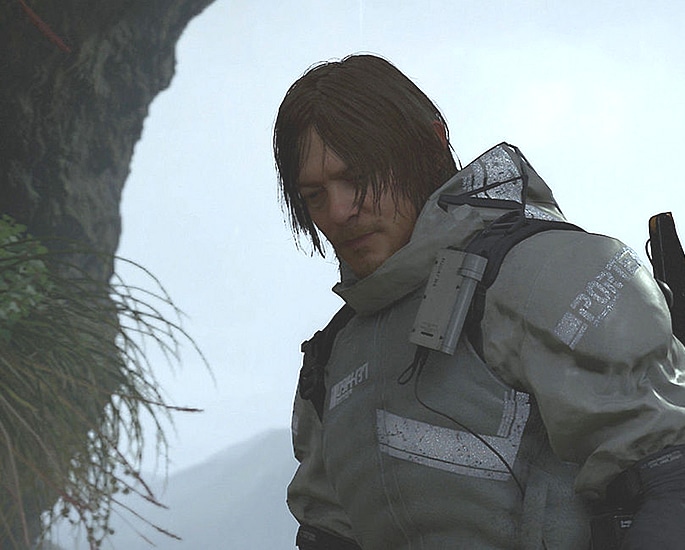 There may be several trailers for Death Stranding, however, they do not provide much of an idea about the game.

Things which were revealed were the characters and environment as well as the release date.

Despite the lack of information, it has increased the excitement in gamers as they are curious to find out what the game is about.

The teaser trailer was one which was met with surprise and confusion as many did not really know what was going on.

Subsequent trailers have not provided much of a hint of the story which makes it quite unpredictable when it is released.

The game was first revealed at E3 2016 and it showed The Walking Dead‘s Norman Reedus on a beach.

He is Sam Bridges and players will take control of him, though it is unknown if players will be able to control other characters during different parts of the story.

He is surrounded by dead sea creatures. He then sees a baby and comforts it, however, it mysteriously disappears and in its place is an oil-like substance.

The baby is potentially a major part of the story as it is seen throughout the trailers. It may even be one of the main characters.

To know what role the baby plays, we have to wait for the official release.

From the third trailer, Sam works for Corpse Disposal Team 6 and he and his team retrieve dead bodies in a world where animals appear extinct and the environment appears in ruin.

However, they are stalked by invisible enemies who leave a trail of oily handprints and seem to detect people using sound.

You will also be able to use a futuristic motorbike to travel. That indicates that the bike may be a main mode of transportation for the character of the game. 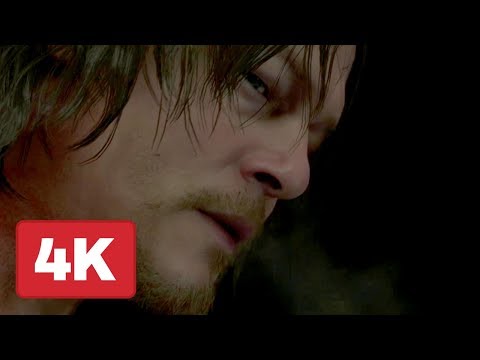 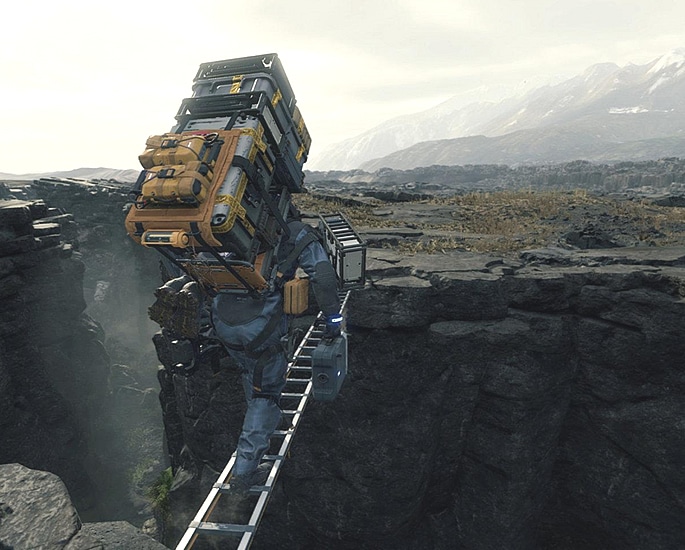 Death Stranding is an open-world action game. But, Kojima Productions said that this game is much more than just an action game.

According to Kojima, this game has a link between life and death.

He used a brief story by writer Kobo Abe to provide the main idea of the game.

While describing the game, Kojima explained that the stick was the first tool created by man to keep all the bad things away from them.

The second tool designed by man was a rope that was used to secure important things.

Kojima compared the punching, shooting and kicking in typical action games to sticks. He said that in Death Stranding, he wants the players to communicate through the game using ropes.

While it may sound difficult to grasp, the way in which the game must be played could be very unique.

In the story, Sam dies and is transported to another world known as an upside-down world that is submerged in water.

The other factor that was talked about was the rain known as “Timefall”. It has the ability to age or deteriorate whatever it hits.

Another element of gameplay is the player’s ability to interact with the environment and wander outside of the character’s body.

Players will also be able to recover items when they die.

The game offers an open-world environment which will allow you to locate and discover a lot of new things and places in the game.

However, the prospect of surviving and fighting against invisible enemies is an intriguing one. 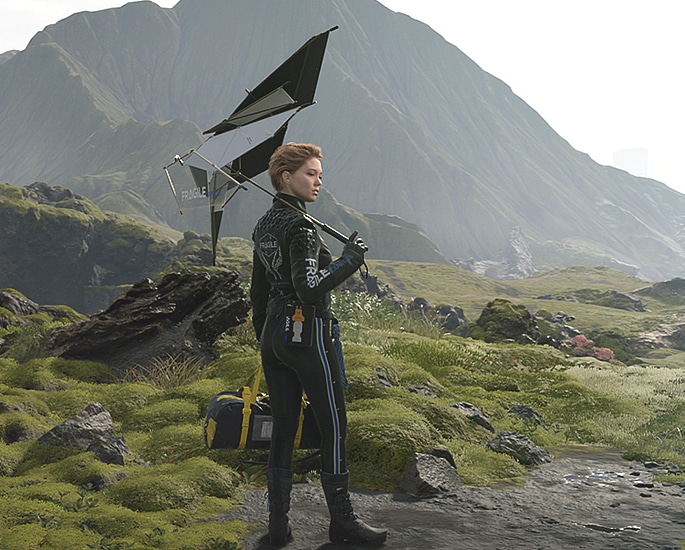 Even though the story remains quite obscure, gamers have been given a few hints from the trailers.

A brief background of Sam has been talked about and we know that Mads Mikkelsen will have a major role.

But apart from that, we have no idea what the objective of the game is and where the character of Sam fits in all of it.

The gameplay trailer may not have given all the details, but it did showcase a stunning landscape.

The futuristic environment is a sight to behold and it is something which is bound to be the perfect backdrop for the story.

What platform will it release on? 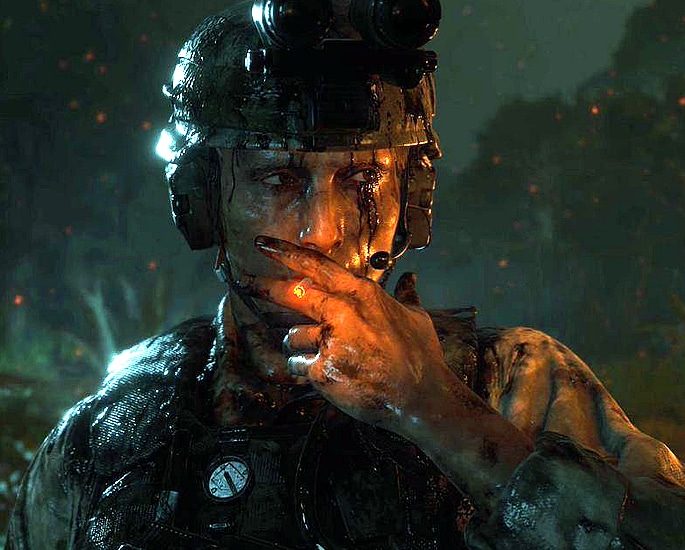 Death Stranding will have single player and multiplayer modes. The game will be a PlayStation 4 exclusive.

However, people were slightly surprised that it was released for the PS4 considering that there is the talk of the PS5 coming out within the next few years.

While the current generation of consoles may be coming to an end, there is still a lot of excitement for new releases.

It is rumoured that the PS5 will come out in 2020 but there is no confirmation that it will happen.

That means that Death Stranding will have at least a year to showcase itself and make an impact.

Who knows, it may even be remastered when the PS5 eventually comes out.

Even though it is a PS4 exclusive, there is speculation that it could release on PC.

During the 2019 Tribeca Film Festival in New York, Kojima was asked about a potential PC version of the game.

He didn’t really answer the question which opened up the possibility of it, though it does not mean a PC version will arrive.

Kojima Productions have been responsible for many successful games including the Metal Gear franchise.

The early games were PlayStation exclusive but they soon started coming out for other platforms.

The success of Death Stranding could lead to it being released on different consoles in the future.

Even though Death Stranding has not revealed the full extent of the story, the glimpses coupled with star cast make one of 2019’s most anticipated releases.

Whatever the story may be, the potential twists are sure to be mindblowing.

Three years after it was first announced, Death Stranding is finally around the corner and gamers are excited to get their hands on this upcoming release.

Mohsin is a writer, editor, thinker and fan of incomplete sentences. He is also crazy about playing video games and unveiling changes in technology.
Control Junk Food Eating with this ‘Electric Shock’ Bracelet
10 Best Mobile Apps Loved in Pakistan