Daughter-in-law Harjot Kaur has been charged with the murder of her mother-in-law, Satnam Kaur, aided by a man she paid to help kill her in Punjab.

Harjot then paid Vikki the remaining Rs 1000 for helping her

Punjab police have solved the murder of an elderly woman named Satnam Kaur in Phagwara, with the help of CCTV which captured footage of the suspects.

It’s emerged that her daughter-in-law, Harjot Kaur, was behind the murder, which took place on Friday, March 29, 2019.

Police say Harjot coerced her accomplice Vikram Singh, a known drug addict, to carry out the killing for Rs 1500 and even fed him a burger meal for helping murder her mother-in-law.

The victim, Satnam Kaur was the wife of the late Baldev Singh and was living alone at her residence in Adarsh Nagar in Phagwara. She had two sons, Jagmohan Singh and Manmohan Singh who lives in Canada.

Harjot lives in Daduwal village, district Jalandhar, and was married to Satnam’s eldest son Jagmohan Singh, who passed away in 2017. She was not on good terms with her mother-in-law.

The hired killer, Vikram Singh, known as Vikki, from the village Sarhali in Jalandhar, strangled Satnam Kaur to murder her, accompanied by Harjot.

A third person named Anju Rani, also from Daduwal village, has also been confirmed as associated with the murder.

The Superintendent of the Police Phagwara, Mandeep Singh told media that a dispute over property and land was the main reason behind the murder.

Harjot Kaur was in serious debt and planned that by killing her mother-in-law she would gain money and property going into her name after her death.

In addition, it’s revealed that Harjot Kaur had been planning to kill her mother-in-law for two days prior because she had also been spreading malicious rumours to relatives about her character and even questioned if her granddaughter was really her late son Jagmohan Singh’s daughter. 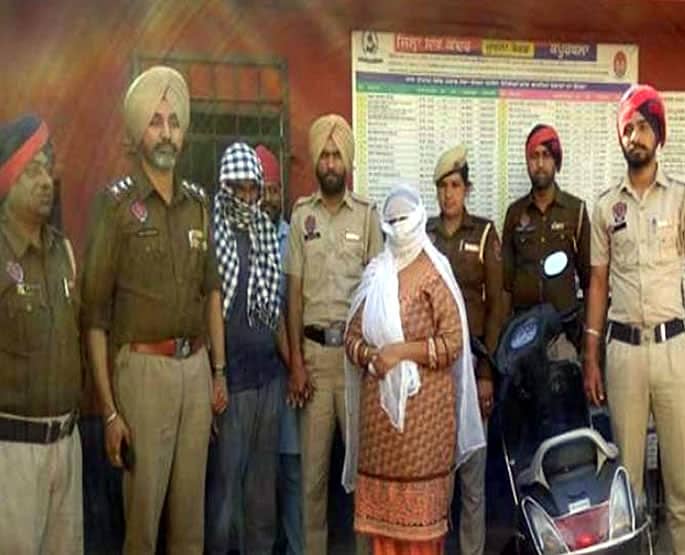 Harjot had told Satnam’s brother to tell her to stop such spreading derogative gossip and Harjot even threatened to take her own life with poison. But Satnam did not listen and ignored it all.

A plan of the murder was then arranged between Harjot and Vikki, including the locations of the room on the first floor of the residence Satnam Kaur lived at.

Harjot paid Vikki Rs 500 before leaving on Friday, March 29, 2019, when both of them set off from Jalandhar on an Activa Scooter. When they arrived in Phagwara, they stopped and had a burger meal.

They then arrived at the residence of Satnam Kaur. She was surprised to see them and told them to leave. They forced their way in and held her down.

Vikki held her mouth shut to stop her screaming and they used her dupatta to strangle her.

After killing her, they quickly fled the crime scene. Harjot then paid Vikki the remaining Rs 1000 for helping her murder her mother-in-law and returned to their villages.

Other tenants who lived in the same building were the ones to find Satnam Kaur.

Police say, Ram Saran aged 84 and a School Teacher Sandeep Sharma lived on the ground floor. They usually had tea with Satnam Kaur in the mornings and noticed her absence on Saturday morning. When they went to her room they found her strangled with a dupatta wrapped around her neck.

Phagwara police were alerted and arrived on the scene thereafter. They found that nothing had been taken from the residence which indicated it not to be a robbery but a murder for another reason.

After investigating, police arrested Harjot Kaur and Vikram Singh under section 302/34 of the Indian Penal Code for the murder of Satnam Kaur.

Anju Rani is added to the case as well by police because she had conducted Reiki on Satnam Kaur a few days earlier before the murder with Harjot knowing.

Harjot Kaur and Vikki have admitted to the murder.

Police kept Satnam’sbody in the local Civil Hospital mortuary after the autopsy was performed. They said that her son in Canada was being informed.

Amit enjoys creative challenges and uses writing as a tool for revelation. He has major interest in news, current affairs, trends and cinema. He likes the quote: "Nothing in fine print is ever good news."
Punjab Drug Officer Neha Shoree shot by Chemist for Revenge
Man Masturbated in front of MP Naz Shah on London Bus