Rohan Bopanna from India and Daniel Nestor from Canada have scored their second ATP World Tour doubles title in Dubai, winning over £90,000 of prize money.

“I think we stuck to our strengths playing aggressive tennis and a high percentage of first serves."

In the 50-minute final, Bopanna and Nestor dropped just nine points on serve and managed to break the Pakistani-Serbian pair on four occasions.

They also served a total of nine aces on the way to winning the trophy and dropped just one set during the whole tournament.

Bopanna and Nestor saved an early break point opportunity in the first set. After breaking Zimonjic’s serve in the ninth game, they kept up the momentum and won the first set within 27 minutes. 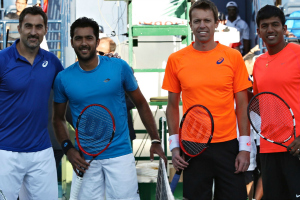 In the second set, Qureshi was broken on serve, but Nestor saved the day by holding his serve to take the 2-0 lead. They went on to win 6-4, 6-1.

After the match, the pair reflected on their performance and admitted that having prior, inside knowledge of their opponents was an advantage and made a huge difference on court.

Nestor said: “I think it goes both ways. Obviously they know us, too. In all of these doubles matches, it really comes down to a couple [of] points and who starts a little bit better and who gets ahead.

“Fortunately we did that today. If they would have got an early break, it would have been a totally different match.” 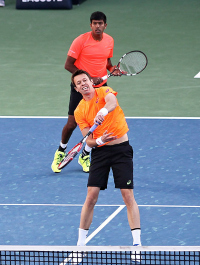 Bopanna was pleased with the way they played, saying: “I think we played a really solid match. I think we stuck to our strengths playing aggressive tennis and a high percentage of first serves, which I think was the key.

This is the second ATP World Tour title for the fourth-seeded Indian-Canadian pair. They won their first ATP title in January 2015 after defeating Jean-Julien Rojer and Horia Tecau in Sydney. This has taken their new partnership to a 10-3 win-loss record.

With tension rising between India and Pakistan at the Cricket World Cup in Australia, the tennis doubles final at Dubai has continued the rivalry with the two nations lining up on the opposite side of the net.

Bopanna of India, and Nestor of Canada, took on Qureshi of Pakistan and Zimonjic of Serbia.

All four players were featured in last year’s final, although Bopanna was teamed with Qureshi whilst Nestor was partnered by Zimonjic. It was Bopanna and Qureshi who won the Championship in 2014.

Both teams have enjoyed a lot of success over the years, but decided to split ways in the 2014-15 season. Bopanna and Nestor played their first ever tournament together in Winston-Salem in the summer of 2014.

Federer, winner of 17 Grand Slam titles, executed his serve and volley tactics in perfection to won the Championship with 6-3, 7-5.