Australian Cricketer Phillip Hughes has succumbed to his injuries after he was hit by a bouncer in a domestic game. India’s tour game against Cricket Australia XI was called off after the news broke out of his death.

“Masuri would like to send sincere and heartfelt condolences to the family of Phil Hughes over their great loss."

Hughes had suffered a severe injury to the neck and brain after being hit by a bouncer during a Sheffield Shield match on 25 November 2014.

It was a sad day for Hughes family and the cricketing fraternity, as South Asian fans and celebrities expressed their heartfelt condolences after hearing the death of such a remarkable individual.

Australia team doctor Peter Brukner confirmed the shocking news at a press conference on Thursday announcing: “It is my sad duty to inform you that a short time ago Phillip Hughes passed away.

“He never regained consciousness following his injury on Tuesday. He was not in pain before he passed and was surrounded by his family and close friends.

“As a cricket community, we mourn his loss and extend our deepest sympathies to Phillip’s family and friends at this incredibly sad time. Cricket Australia kindly asks that the privacy of the Hughes family, players and staff be respected.” 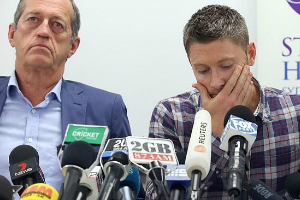 Brukner confirmed that Hughes died of a vertebral artery dissection which was ‘incredibly rare’: “Philip took the blow on the side of the neck. As a result of that blow his vertebral artery, one of the main arteries to the brain, was compressed by the ball.”

“That caused the artery to split and for bleeding to go up into the brain, and he had a massive bleed into his brain.”

It was Sean Abbott, the 22-year-old bowler, who delivered the ball that struck Hughes. Tony Grabs, director of trauma at St Vincent’s, added:

“The head injury he suffered was catastrophic. He went to theatre and had extensive surgery to remove some of the skull around his brain to help allow the brain to expand so it wasn’t compressed.”

“Over a period of the first 24-48 hours, as we know, he did not make very much improvement and unfortunately as a consequence of the injury he died.”

Twitter has been awash with sympathies to family, friends and supporters of the Aussie cricketer. Former Indian cricket superstar, Sachin Tendulkar, tweeted out:

Pallavi Sharda, an Indian-Australian actress and dancer who met Hughes while filming Besharam on location, said: “RIP #PhilHughes.. Will always remember the few laughs we shared. Miss your wonderful wonderful soul. Sending so much love to your family.”

“Coming as I do from a sport where death is a clear if very remote possibility #rugby seems crazy for someone to lose one’s life in cricket.”

South Asian cricket fans were left stunned at the loss of a great sports talent. Calling for tributes to remember the New South Wales player, many of the fans posted their thoughts on a cricket forum online.

Khalil1986, also from Pakistan, echoed: “Some sort of tribute is imperative. Woke up earlier to check scorecard of match and got this news instead was absolutely gutted. Went to sleep and just woke up and the news just hit it me again. Such a very very sad day.” 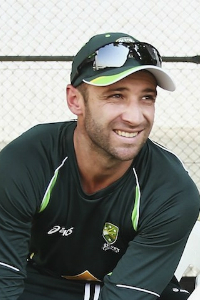 Among the outpour of sympathies, some showed support for Sean Abbott, the 22-year-old bowler, who bowled the ball that hit Hughes. Former Pakistan fast bowler turned coach, Waqar Younis said:

“How will he (Abbott) continue? He needs counselling, which I am sure must have started, and needs to stay calm.”

The second day’s play of the third test between Pakistan and New Zealand was initially suspended before both teams agreed to abandon the day in mark of respect for Philip Hughes.

Day two being called off was confirmed by the ICC as they issued the following statement:

“Pakistan and New Zealand have agreed to suspend Thursday’s play in the third Test in Sharjah following the passing of Australia batsman Phil Hughes.”

“As a mark of respect, both sides have decided to treat the second day as a rest day and extend the Sharjah Test to 1 December, which will be the final day of the three-Test series.”

India has also cancelled their second and final warm-up game against Cricket Australia XI in Adelaide on Friday 28th November, 2014. 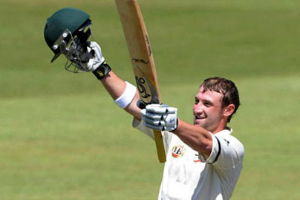 Masuri, the manufacturer of Hughes’ helmet, expressed their sympathy saying: “Masuri would like to send sincere and heartfelt condolences to the family of Phil Hughes over their great loss. Everyone at  is truly saddened by this event.”

The opening batsman was not the first to suffer fatal head injury in cricket. Raman Lamba, an Indian batsman, was hit in a similar manner during a domestic game against Bangladesh in 1998.

Lamba lost his life at the age of 38, three days after having brain surgery.

Following the tragic incident of Hughes there is a lot to think about as far as protecting batsmen in the game.

Hughes, who made his international debut at the age of 20, played 26 Test matches and 25 One Day Internationals for Australia. He became the youngest cricketer to have scored centuries in both innings of a Test match against South Africa.

The Australian flag was flying at half mast on Thursday at the Adelaide Oval, with Hughes picture displayed on a giant screen outside the ground.

DESIBlitz mourns the loss of Phillip Hughes, a great cricketer and a wonderful human being.

Scarlett is an avid writer and pianist. Originally from Hong Kong, egg tart is her cure for homesickness. She loves music and film, enjoys travelling and watching sports. Her motto is “Take a leap, chase your dream, eat more cream.”
The International Premier Tennis League 2014
Hockey Champions Trophy ~ Bhubaneswar 2014