Aryananda Babu from Kerala won the singing competition show, Sa Re Ga Ma Pa L’il Champs 2020. She shares her excitement about her win.

“I am extremely delighted to have received this opportunity"

Aryananda from Kozhikode in Kerala was up against finalists, Ranita Banerjee and Gurkeerat Singh.

However, the singer, who gave a tough competition to her opponents went on to steal the win.

Interestingly, Aryananda cannot speak Hindi. Yet, this did not stop her from winning a show were only Hindi songs are sung.

Speaking about the same, she said:

“I don’t know Hindi fluently. All including the groomers were North Indians. I managed talking in English.

“After some episodes, I was able to understand Hindi but was not able to speak. My Hindi pronunciation was very bad.

“All juries told me about that before the final audition. Later, I started concentrating on that.

“Though I used to sing Hindi songs at home, there was no one to correct my pronunciation.”

She fearlessly proved that music has no language barriers.

The judges of the singing competition, Himesh Reshammiya, Alka Yanik and Javed Ali were captivated by Aryananda’s beautiful voice.

In fact, the young singer won the hearts of the three judges early on in the show.

The trio shared anecdotes from their filming days increasing the entertainment factor of the final. 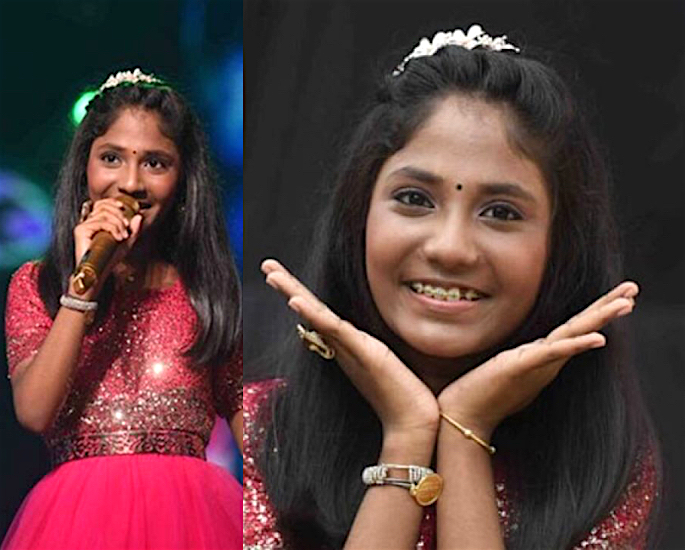 Speaking about her win, Aryananda said:

“This is honestly a dream come true for me. The entire journey has been a great learning experience and I am immensely grateful to the mentors and judges who have constantly supported and helped me understand my potential as a singer.

“As I end this memorable journey, I am truly going to treasure the friendships that I have made, the knowledge that I have gained and most importantly the relations that I have built with the judges and jury members for life.

“I am extremely delighted to have received this opportunity to showcase my talent.”

At the beginning of the show, Alka Yagnik, Kumar Sanu and Udit Narayana were the initial judges.

They stated that Aryananda will surely become a renowned playback singer. The young talent has also got a chance to sing in two Hindi films and two Malayalam films.

Soon after her win, singers Sujatha and Sreenivasan called Aryananda to congratulate her on her win.

Aryananda is the daughter of music teachers, Rajesh Babu and Indu. The young singer continued to speak about her parents. She said:

“I faced a lot of difficulties. I practised a lot at that time. My parents are my gurus. My father is running a music school named Nisari School of Music.

“There are many students in the school but it is closed due to the epidemic now.”

These include school, district, state and national competitions. She was also the runner up in a reality show on Zee Tamil Channel in 2019.

Aryananda has already performed on approximately 450 stages both in and out of Kerala.

Sa Re Ga Ma Pa L’il Champs 2020 started in February. However, due to the coronavirus pandemic, the competition was stopped in March and commenced in July.

Ayesha is an English graduate with an aesthetic eye. Her fascination lies in sports, fashion and beauty. Also, she does not shy away from controversial subjects. Her motto is: “no two days are the same, that is what makes life worth living.”
Kesar Singh Narula – A Punjabi Music Pioneer
Guru Randhawa’s ‘Naach Meri Rani’ crosses 35M Views