A primary school teacher from Maharashtra has won the Global Teacher Prize 2020. He has also received a $1 million prize.

"I was delighted to be the only Indian selected in the top 10."

The 32-year-old from Maharashtra was named the winner for his efforts to promote girls’ education in India.

He teaches at Zilla Parishad Primary School, in the village of Paritewadi, Maharashtra.

Mr Disale was chosen ahead of 12,000 other nominations from 140 countries.

Mr Disale has also been recognised for encouraging a quick-response (QR) coded textbook that revolutionised education in the country.

Actor Stephen Fry announced Mr Disale as the winner of the Global Teacher Prize 2020 at a virtual ceremony broadcast from the Natural History Museum in London.

The teacher’s epic reaction to his win has become a viral sensation.

Mr Disale was praised by the competition’s judges for his work to ensure disadvantaged girls went to school and achieved high results.

The alternative for these girls would be missing out on school and facing early marriage.

According to the Global Teacher Prize website, the impact of Mr Disale’s interventions has been extraordinary.

There are now no teenage marriages in the village and at the school, girls’ attendance is 100%.

The school was also recently awarded the best school in the district, with 85% of his students achieving A grades in annual exams.

One girl from the village has now graduated from university. 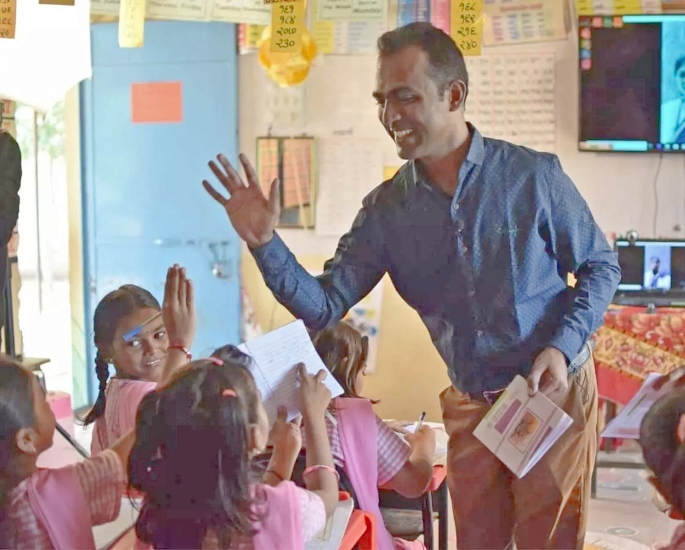 He also provides online science lessons for pupils in 83 countries and runs an international project building connections between young people in conflict zones.

Mr Disale changes the content, activities and assignments in the QR coded textbooks, to create a personalised learning experience for each student.

Mr Disale, who has been teaching Classes 1 to 4 in Zilla Parishad school for the last 11 years said:

“I did not expect this prize at all. I was delighted to be the only Indian selected in the top 10.

“It is an honour to represent the ZP school, the Maharashtra state government education system and India at an international level.

“This prize will encourage me and other teachers to innovate, evolve and develop creative methods of teaching-learning.”

Mr Disale has announced he will share half the $1 million prize money with the nine other finalists.

His decision means $55,000 (£40,000) will go to each of the other nine finalists from nations including Italy, Nigeria and South Korea.

This is the first time in history when a winner decided to split the prize amount with their competitors.

The teacher added: “In this hard time, teachers are giving their best to make sure every student has access to their birthright of a good education.”

Akanksha is a media graduate, currently pursuing a postgraduate in Journalism. Her passions include current affairs and trends, TV and films, as well as travelling. Her life motto is 'Better an oops than a what if'.
Pub applies to be ‘Place of Worship’ in bid to reopen for Drinkers
Indian Woman arrested for Killing Love Child