Arjun Singh Khakh is a young British Asian actor pursuing his dream. He chats to DESIblitz about acting, theatre and his future ambitions.

"I have always wanted to be in Bollywood films."

Young, aspiring teen Arjun Singh Khakh is an actor who lives in Warwick, England. Arjun has taken part in some of the most famous theatre performances in the world.

The Royal Shakespeare Company (RSC) have signed Arjun on to participate in their plays.

The adaptation of Shakespeare’s Macbeth (2018) was the first performance Arjun took part in. He portrayed the role of Young Macduff.

After realising his endless talents for acting, he is also playing a role in the musical adaptation of David Walliams’ children’s book, The Boy in the Dress (2020).

13-year-old Arjun, along with three other boys, is taking on the role of Darvesh, the lead actor’s best friend.

On the opening night of the show, Arjun performed in front of comedian and writer David Walliams, English singer Robbie Williams and English songwriter Guy Chambers.

As well as being a budding actor, Arjun is also juggling the pressure of school. However, rather than sticking to one, he is committing to both acting and school.

Arjun travels from Warwick to London regularly to attend rehearsals. He is certainly living a hectic but exciting life at such a young age and is an inspiration to many other teens.

DESIblitz exclusively chats to Arjun Singh Khakh about being a teen actor, his inspirations, family support and future goals. 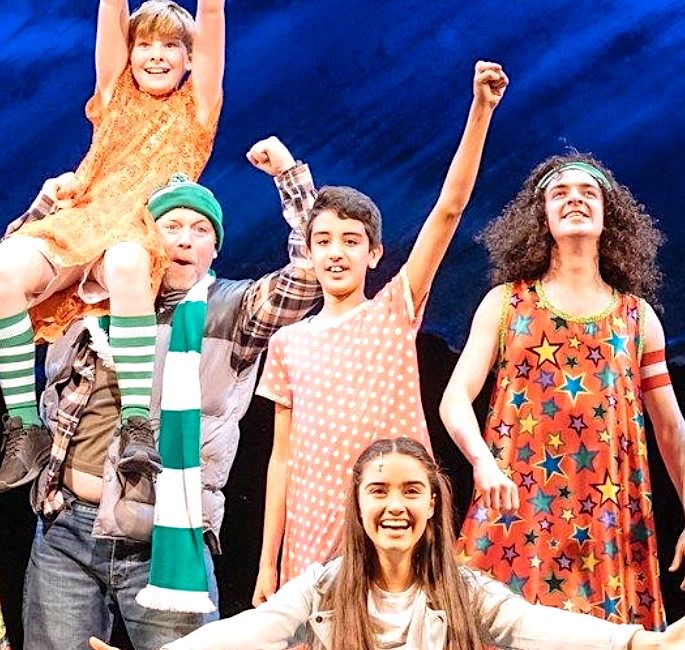 What influenced you into taking an interest in acting?

I have always taken an interest in theatre, TV shows and films. I have always enjoyed watching some of the biggest names in the industry both onstage and on-screen.

Personally, I like watching young performers because it is really encouraging to know that people that are my age are doing so many big things. It just drives me more to continue acting.

The thing that really influenced me was watching Bollywood movies. Growing up as a British Asian, I have always taken an interest in Bollywood films.

I think it is really cool how they are choreographed with so many people and such a buzz in all the scenes and sequences.

How do you juggle school and acting? Do you have strict schedules?

I have many schedules in place to ensure that I am keeping on top of my school work. My parents and my granddad have been extremely supportive and have taken me to rehearsals and shows.

My school have been very supportive as well. They have set project work for me during the course of this job which has really helped me stay on top of all my school work as well as doing shows.

The RSC also provides me with a tutor to ensure I do all the required hours of study per week and I don’t get left behind.

How supportive are your friends and family of your acting career so far?

My friends and family have been very supportive of my short career so far and I thank them for that.

My parents, grandparents and uncles and aunties have supported me throughout this journey. I would definitely not have been able to do any of this without them.

“Not to mention all of my friends – they have been so amazing through this journey with me.”

They have supported me in every manner and have always been there for me during the highs and lows.

In the last few weeks, many children from my school came to watch the show. It has been awesome to perform in front of them. They were one of the best audiences we have had! 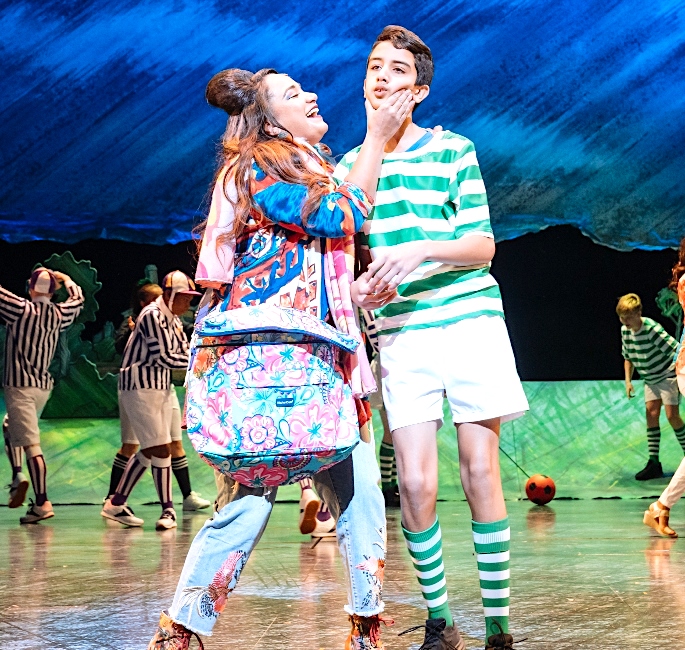 What was your reaction when finding out the RSC had signed you on?

I was over the moon to have been taken on for one of the most famous theatre companies in the world. Not only once but twice, as I also appeared in an RSC production of Macbeth (2018).

It has been an unbelievable experience working on both of the projects. I am so proud to perform at the RSC where so many famous actors like David Tennant and Dame Judi Dench have performed in the past.

The RSC is such a fantastic organisation and they are brilliant with young performers. I had such a great time working on Macbeth (2018) and was so happy to be back there again this time.

How did it feel to be performing in front of figures such as Robbie Williams and David Walliams?

I couldn’t believe it. It took a few moments for me to recover after meeting both people.

To be in a show adapted from a David Walliams novel with music written by Robbie Williams it is sort of as good as it gets.

I was lucky enough to perform on the opening gala night of the show when both attended.

“At the end of the show, both David and Robbie joined us on stage which was really special.”

How long did it take to rehearse for The Boy in the Dress?

It took three months to rehearse the whole show ready for people to watch it live. It was quite a long process to get everything ready and learn my lines and all of my scenes and sequences.

The rehearsal started in London. My parents would drop me off at the train station and the RSC chaperones would then take us to London for the day.

It was another great experience. We did three months in London and then moved the rehearsals to Stratford.

What did you learn from playing the character Darvesh in The Boy in the Dress?

I learnt what it means to be a best friend and how supportive you should be. Darvesh is a character who has always stood by his best friend, Dennis, even when he is being bullied.

“I have learnt it is okay to be different no matter what anyone else says.” 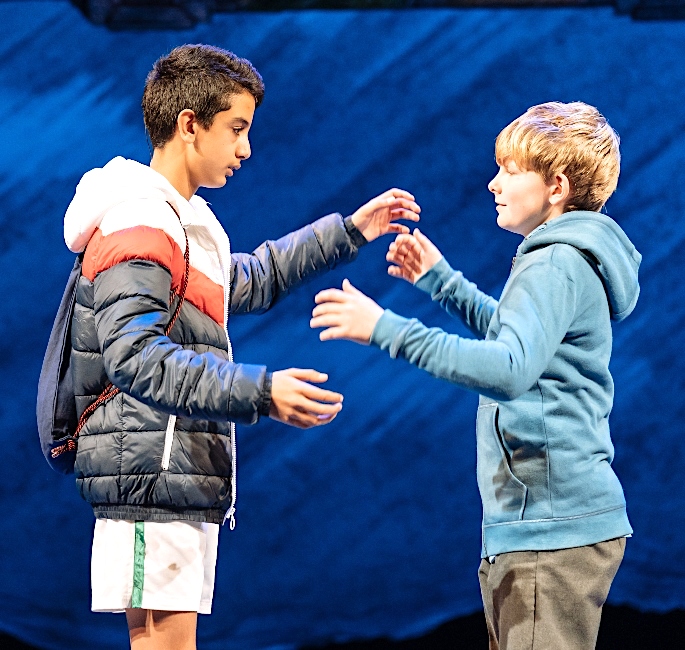 Out of Macbeth and The Boy in the Dress which one did you enjoy more and why?

I think I enjoyed The Boy in the Dress more because it was more fun to do. It’s a musical which has bought its own excitement.

I love the singing and dancing sequences in the play.

In the near future are there any further theatre productions you would like to be signed up for?

Yes I would but at the moment I have nothing in the pipeline.

“I hope to start looking for my next acting role once The Boy In the Dress ends.”

Do you wish to ever act in films or TV programmes in the future or solely stick to theatre performances?

I would love to move into film and TV programmes. I think it would be a great experience and really fun to be in a movie.

I would also love to do some work for children’s television channels like CBBC or CITV.

Are there any new performances in the pipeline that you will be participating in?

At the moment no. I am fully concentrating on The Boy In the Dress for the next few months. However, when it is finished, I will be looking once again.

“I also start my preparations for my GCSEs next year in Year 9 at school.”

Which I am going to work hard in as I want to make sure I do well.

As a young actor, what advice would you give to those who wish to pursue acting at a young age?

I would say never give up. There are many ups and downs in this industry, I have experienced both of them.

The most important thing to do is carry on and look to your next audition as you never know how many other opportunities it may lead to. 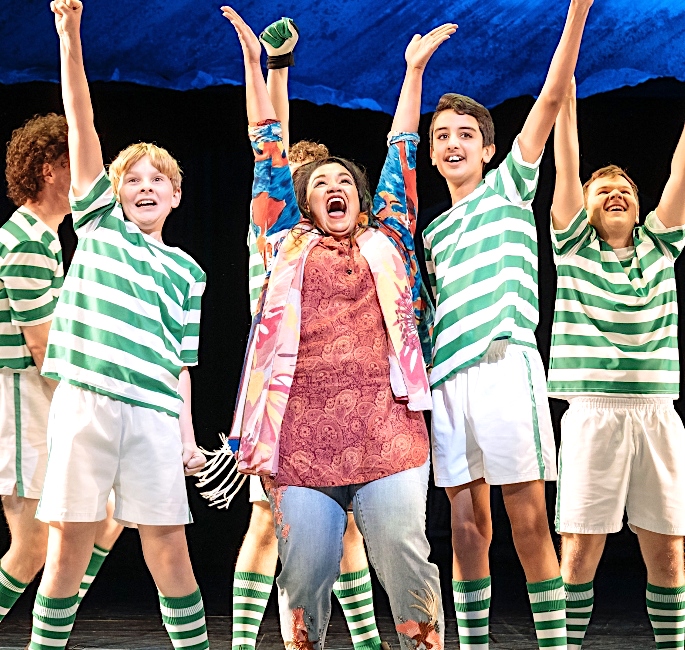 Being a teen full of ambition and courage, Arjun is an inspiring young boy. He has big goals that he wishes to accomplish in the near future.

It is eye-opening to witness young, British Asians taking centre stage, participating in famous theatres. Hopefully, Arjun encourages many others to pursue acting and to follow their dreams.

Meanwhile, The Boy in the Dress is running in the Royal Shakespeare Theatre until March 8 2020. To watch Arjun perform in the play, click here to book tickets or call the number 01789 331111.