The Conservatives returned to government with the help of 1 million ethnic minority voters, according to a report by British Future. Conservative votes were high among the Asian community, particularly Hindus and Sikhs. DESIblitz reports.

“The middle-England ‘Mondeo Man’ of the 2015 election could well be a British Asian.”

One million Britons from ethnic minority backgrounds voted for the Conservatives at the 2015 General Election, according to a report by a thinktank.

According to British Future’s data, 33 per cent of ethnic minority voters backed the Conservatives.

Given an estimated 3 million people from ethnic minorities voted, this equates to 1 million votes won by the Conservatives from this group.

This is double their ethnic minority vote bagged in the 2010 General Election, and has given the party its best result to date. 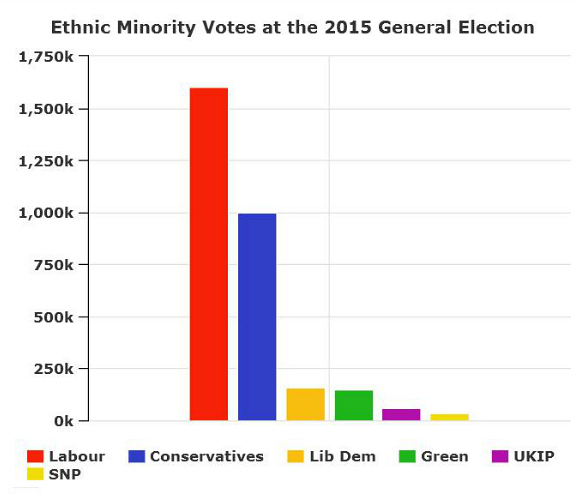 While Labour are still supported by the majority of ethnic minorities (52 per cent) with a total of 1.6 million votes, the gap between the main parties is closing, especially among Asian voters.

The report says that 38 per cent of Asians voted for the Conservatives, compared to 50 per cent for Labour.

This is relatively high in comparison to the black community, where 67 per cent for Labour and 21 per cent for the Conservatives. 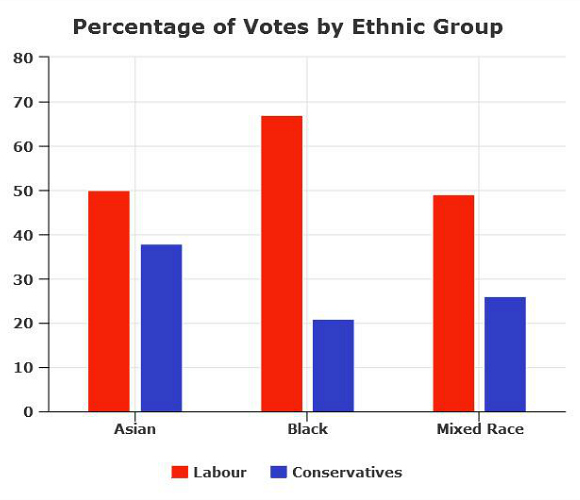 Sunder Katwala, the Director of British Future, said: “Ethnic minority votes are more ‘up for grabs’ than ever before.

“While David Cameron clearly took a lot of votes from the Lib Dems in the election, he also seems to have extended his party’s appeal to ethnic minority voters too.”

He continued: “If it presents itself only as a party of the underdog, Labour may send a message to aspirational ethnic minority voters that, if you get on in British society, you ‘trade up’ to the Tories – just as C2s did for Margaret Thatcher.” 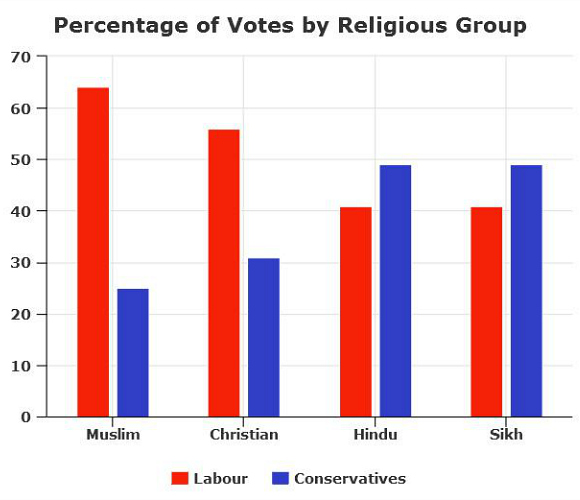 According to the data, nearly half of British Indians supported the Conservatives, whereas only four out of every 10 sided with Labour.

What’s more, both Hindus and Sikhs were more likely to vote Conservative than Labour for the first time in a General Election.

Figures for both groups showed 49 per cent opted for Conservative and 41 per cent voted Labour. 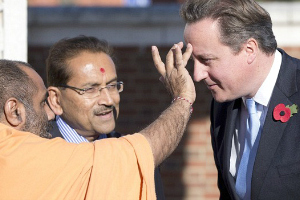 But the research only included a small sample of Sikhs (63 people), thus the results may not be representative of the overall picture.

The support for Labour is still strong among ethnic minority Muslims and Christians. British Muslims largely voted for Labour (64 per cent) over the Conservatives (25 per cent).

Meanwhile, 56 per cent of ethnic minority Christians polled for Labour and only 31 per cent for the Conservatives.

However, it must be stressed that the data for Muslims and Christians is not just limited to those who originate from South Asian countries of India, Pakistan, Bangladesh and Sri Lanka.

It also includes Britons with origins in countries as diverse as Somalia, Nigeria, Yemen, and a host of other countries from across Africa and Asia. 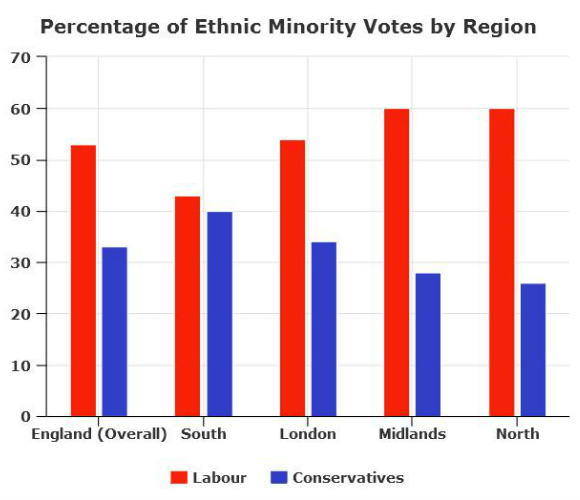 There are also regional divides in the ethnic minority vote. Support for the Conservatives amongst ethnic minorities is particularly high in the South, where it stands at 40 per cent.

But this dwindles down to 26 per cent in the North, which is very much Labour territory. Katwala said that while Labour ‘doubled majorities in heartland urban seats’, they struggled to maintain and gain ‘southern marginals’. He said:

“In the seats Labour needed to win…better-off BME voters may have found more to like in David Cameron’s messages on the economy and strong leadership.”

Thus, Katwala said that in an increasingly diverse Southern towns such as Watford, Reading, Swindon, and Bedford, ‘aspirational’ ethnic minority voters turned to the Conservatives.

He said: “The middle-England ‘Mondeo Man’ of the 2015 election could well be a British Asian.”

This latest research shows that Labour can no longer take ethnic minority votes for granted. For the last half century, the ethnic minorities constituted in effect, a bloc vote for Labour. This often reflected their working class roots and values.

However, as more British Asians have climbed the social ladder, we are seeing a trend for middle class Asians, particularly in the south of England, to vote Conservative. 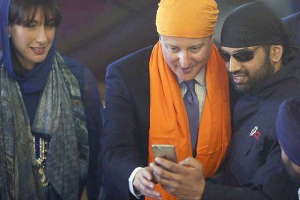 With a leadership election coming, the Labour Party are in the process of defining their future direction, as a battle for the soul of the party ensues.

Labour will have some thinking to do. The Asian community has been one of its core support bases.

But attempts to boost their Asian vote could further alienate their core working class vote, who particularly in the North are increasingly turning to UKIP.

Furthermore, Labour can only win a General Election if a large enough section of the middle class support them also. But the worry is that in appealing to the centre ground, it could upset their core working class support.

The British Future report shows that the Conservative strategy to target Hindu and Sikh voters may have helped David Cameron to return to power.

With the dramatic increase in the ethnic minority and British Asian vote, the Conservatives will no doubt view this as a huge coup.