There have been reports of a feud, but Zayn Malik’s sister’s ex-convict husband has said the wedding did not cause a rift.

"You can assume what you [want] we know the truth"

Amid the reports, Zayn Malik’s sister’s ex-convict husband has claimed their wedding did not cause a “major rift” between them and Zayn’s family.

Junaid Khan took to Instagram to break his silence on the matter.

Khan married Waliyha on December 12, 2020, and it was reported that the wedding caused a feud in both his and her family.

The wedding had also attracted attention as it was reportedly broken up by police for flouting Covid-19 rules.

In response to the reports, Khan shared a series of photos with Waliyha. Underneath, he wrote:

“Just to add to this I will never answer personal questions about Zayn and my father-in-law!

“You can assume what you [want] we know the truth and we are happy that’s all that matters.” 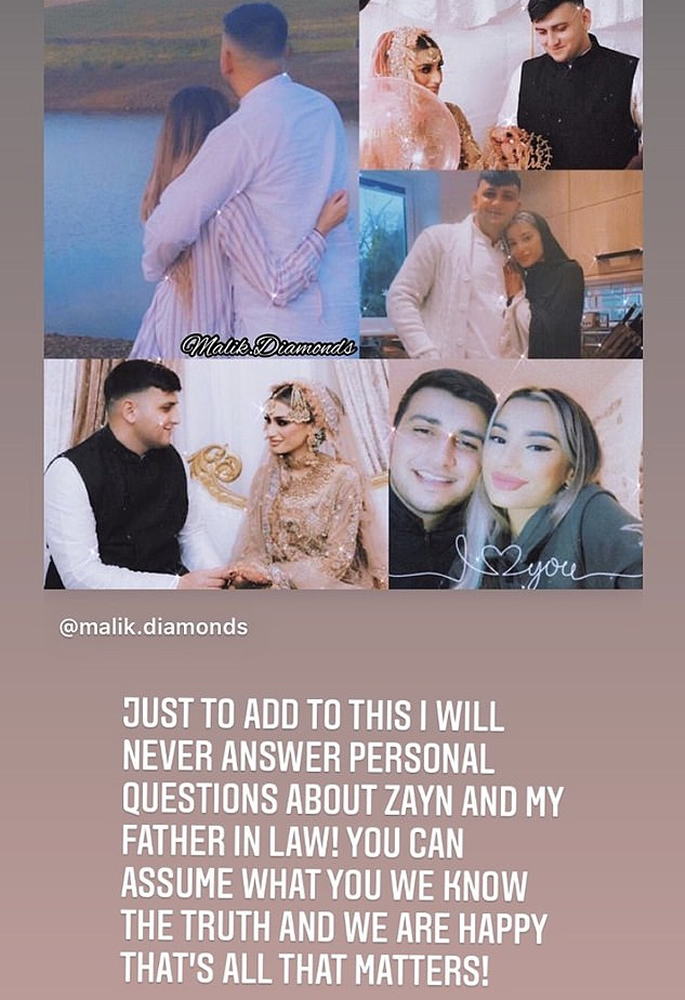 Waliyha seemingly supported her husband, sharing a meme about “people bonding over their dislike towards you”. She captioned the post:

“Sorry but after what I’ve just seen this needs to be reposted. OMG embarrassing get help!!! See someone about ur issues.”

Zayn Malik did not attend the wedding nor did his father Yaser. It was reported that he was concerned over Khan’s criminal history.

While Zayn remained in the United States, Yaser refused to leave the family home in Bradford and walk 70 yards to youngest daughter Safaa’s home, where the wedding took place.

Sources have told The Daily Mail that Zayn has not spoken to Waliyha over the phone and did not send wedding gifts.

Khan and Waliyha are said to be living in a glorified outhouse in Yaser’s garden, as he has allegedly disowned them and is refusing to acknowledge their marriage.

The living arrangement was taken by Zayn’s mother Tricia, who continues to support her daughter and her husband.

Khan’s relatives have also reportedly disowned the newly married couple, claiming that Waliyha is “disrespectful” after she got into a fight with Khan’s mother, Amreen Begum.

A relative said: “Waliyha had a huge fight with Junaid outside his home in the summer. She was hitting him and screaming at him.

“Amreen was there and heard it all. She thought it was disgusting behaviour and believes that Waliyha has no respect for Asian culture.

“She told Junaid that she did not want a daughter-in-law who behaves like that.”

Amreen and her husband Saeed attended the wedding but the relative added:

“It was all plastic smiles for the cameras. They have disowned Junaid and Waliyha and don’t want anything to do with them.

“They went along with it for the ceremony but have not spoken to either of them since then. This is a marriage made in hell.

“It’s been a disaster from day one and it’s not going to end well, I can promise you that much.”

Khan was jailed in 2017 for five years for a carjacking.

He and accomplice Adam Takolia pursued a Seat Leon Cupra before confronting a “vulnerable” elderly woman in Skipton.

The pair threatened her with a screwdriver before making off with the vehicle.

Dhiren is a journalism graduate with a passion for gaming, watching films and sports. He also enjoys cooking from time to time. His motto is to “Live life one day at a time.”
Indian Businessman opens a Mask Factory in Italy
Mia Khalifa shows Support for Farmers’ Protest