Zayn Malik’s sister Safaa has revealed that she has been receiving death threats from a troll about her five-month-old daughter.

Zayn Malik’s sister Safaa has revealed that cruel trolls have sent her death threats against her five-month-old daughter.

Safaa gave birth to her daughter Zaneyah in January 2020, just four months after she tied the knot with Martin Tiser in September 2019.

However, the 17-year-old shared a screenshot of the cruel words that were sent to her friend about her child on Instagram, saying that it was a “disgusting world” for that to happen.

The troll made vile comments about Zaneyah, calling her “ugly” and saying that Safaa “got married to cover the fact that you was pregnant”.

Safaa’s friend came to her defence and said: 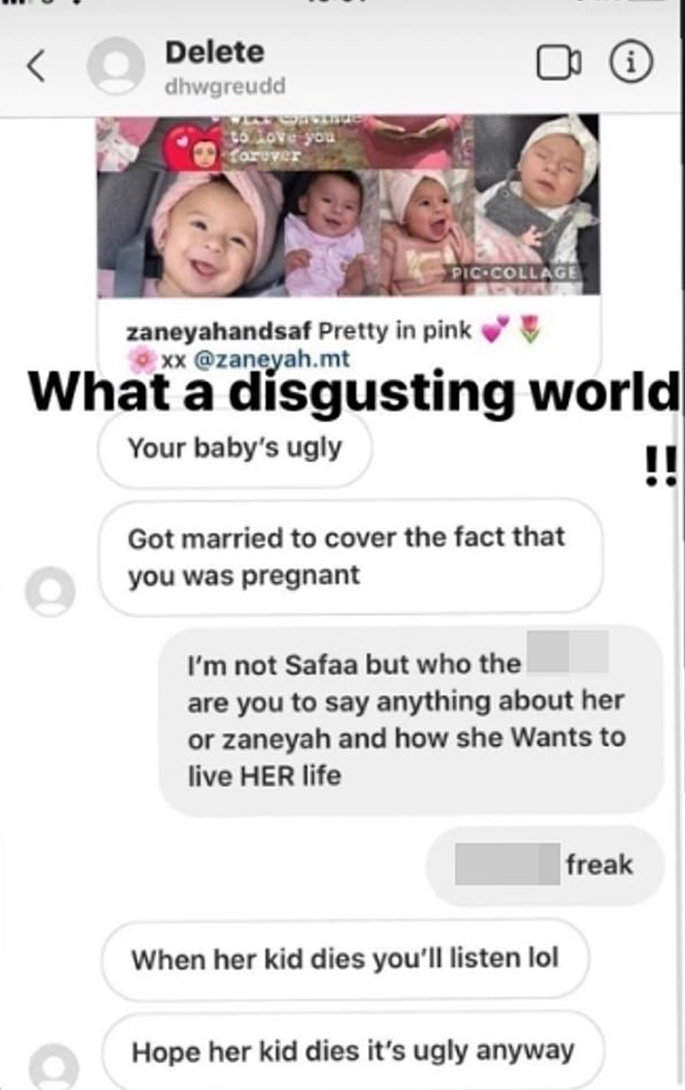 The friend then slammed all trolls as she revealed that Safaa had “been getting so much hate for no reason”, and told them to “think about the effect of your words” on the teen.

She wrote: “Safaa’s been getting so much hate for no reason. If you have nothing nice to say then keep it to yourself.

“If you can’t say things to her in person, don’t say it off fake accounts.”

Safaa was married in a traditional ceremony. She celebrated her pregnancy with a pink-themed baby shower with her friends and family in November 2019.

In a series of pictures on social media, she wore a sash around her neck which read “It’s a baby girl” as she celebrated with her nearest and dearest in front of a flower wall.

Safaa showed off her baby bump in a pink form-fitting dress and slippers as she posed for pictures.

Days after the celebration, Zayn shared pictures as he jetted back to the UK to see his family and congratulated his sister on her pregnancy.

Zayn’s dad Yaser, sisters Doniya and Waliyha attended the ceremony but the former One Direction singer appeared to still be in the United States.

The teenager’s new husband Martin took to his Instagram account to thank their supporters in the wake of some people telling them they were too young to wed.

He wrote: “Thanks to all of you who support us. We so appreciate that.”

Zayn’s family still live in Bradford and he supports them financially.

Dhiren is a journalism graduate with a passion for gaming, watching films and sports. He also enjoys cooking from time to time. His motto is to “Live life one day at a time.”
Tory Activist suspended over Racist Tweet towards Naz Shah
Pakistani Teenager Shoots himself while Making TikTok Video