In her Instagram Story, Uorfi Javed posted evidence of the rape and murder threats she received from her property broker.

"he even called and threatened to rape and kill me."

Uorfi Javed was allegedly threatened with rape and murder by her former broker.

She also criticised a man named Hindustani Bhau for recently threatening her in a video while also calling him out for the harmful text messages.

The ‘Meri Durga’ actress said that because of him, other guys have started publicly threatening her too.

Uorfi shared a screenshot of the communications she got from the man and wrote:

“So this man was my broker 3 years ago.

“He randomly started messaging me, he even called and threatened to rape and kill me.

“This is a known man. Now you see the problem with people like ‘Hindustani Bhau’.

“It’s because of that man threatening me even random people think they can call and threaten to rape me and kill me because of what I put on my body.”

Sharing a picture of her former broker, Uorfi continued:

“This is the man. Unfortunately, I’m not in India otherwise I would have complained about him.

“But I hope you guys see the problem here.

“Because one man decides to openly threaten me, other men think it’s ok to call me and threaten to kill me, rape me.”

Additionally, Uorfi mentioned that men try to control women into getting what they want:

“Let me tell you, ladies, today it’s me they are trying to control.

“When they are done with me, it’ll be you. It’s the control that they want.” 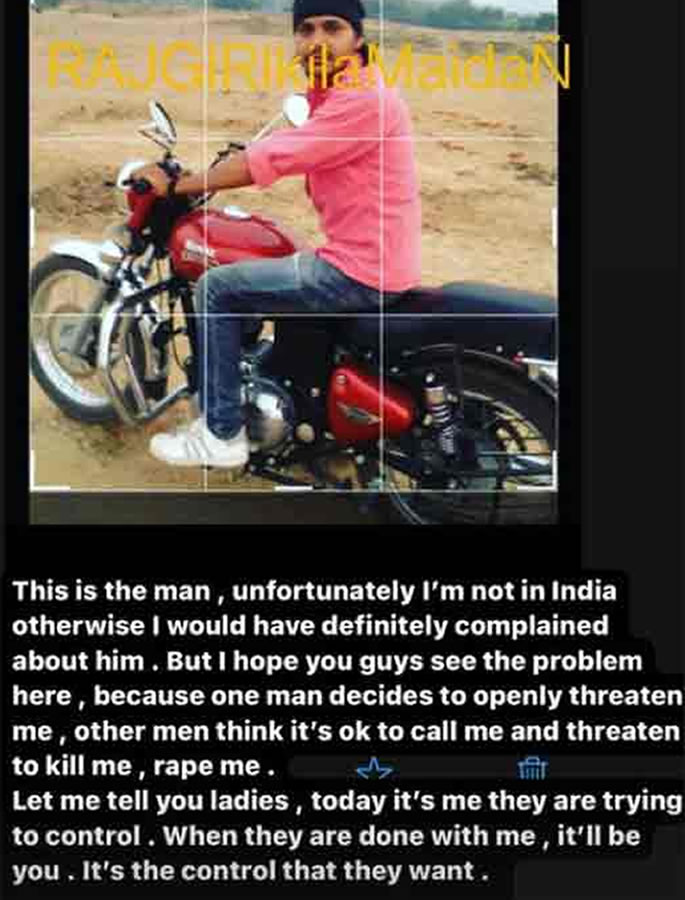 In another Instagram Story, Uorfi Javed explained that she frequently receives threats of this kind.

She added: “I receive death threats and rape threats every day, so it’s nothing new for me.

“I know normalising it is so f**ked up but this is my reality now!”

Whilst acknowledging that it should not happen to her, Uorfi revealed that online trolling has now developed into people verbally abusing her:

“And it’s not just online threats, people have even started to call and threaten me.

“You know I might pretend to not care at all but deep down I really… don’t give a f**k!”

However, Uorfi Javed has said that she will not allow her bad experiences to be fearful of being herself.

Ilsa is a digital marketeer and journalist. Her interests include politics, literature, religion and football. Her motto is “Give people their flowers whilst they’re still around to smell them.”
Saba Faisal regrets going Public with Family Feud
Aamir Liaquat’s Ex-Wife arrested for Leaking Obscene Videos