Winners of the English Curry Awards 2013

The English Curry Awards 2013 saw a spectacular night of glitz and glamour, celebrating the best foodies, chefs, restaurants and takeaways across the UK.

"We loved being here, and everyone that won, it was just great to see how happy they were."

The third annual English Curry Awards were held at the grand and impressive Salford City Stadium near Manchester on September 2, 2013.

It was a glamourous evening celebrating the best that the UK has to offer in terms of food, catering and tantalising South Asian cuisine.

The glitzy evening was hosted by none other than Sunny and Shay Grewal, who rose to fame on Channel 4’s The Family, and have now made a name for themselves in the media world with their own radio show as popular presenters.

Shay looked stunning in a Maria B anarkali dress. In an exclusive Gupshup with DESIblitz, speaking about the event, Shay said: “I think it’s brilliant. I think Awards like this need to happen. 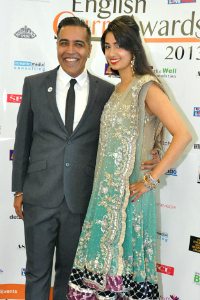 “English Curry Awards, it’s an opportunity for us to celebrate what we’re good at as Asians. Curry is the national favourite dish. We loved being here, and everyone that won, it was just great to see how happy they were,” Shay added.

Sunny provided much of the entertainment for the evening, joking about his favourite dishes that he enjoyed more than his own wife’s cooking!

Speaking about his wife’s culinary skills, Sunny said: “She makes a brilliant cheese on toast.”

Further entertainment was provided by Desi Nach who danced away to some chart-topping Bollywood, Bhangra and mainstream tunes for the audience’s enjoyment.

Of course, the English Curry Awards wouldn’t be the same without a delectable four course meal for guests to tuck into throughout the night. The entire selection of exquisite dishes was provided by Saffron Events UK.

There were thirteen categories in total, each highlighting a specific area of food and catering, ensuring that the efforts of all staff and workers was credited.

One of the big winners of the night was Akbar’s, who took away two big awards for Best Marketing Campaign, and the Best of Manchester Award. Corporate Affairs Director, Dil Fiaz, said after winning his first award: 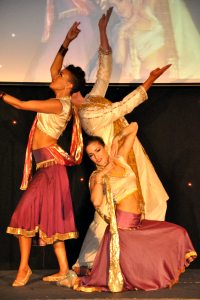 “This was totally unexpected. To receive such an award. It truly suggests that for the marketing team that works so hard in getting our marketing messages across, it’s truly deserved.”

As one of the official media partners for the Awards, DESIblitz had the honour of presenting the award for Best Restaurant Design on the night. The Award went to Birmingham based Rajdoot Tandoori, with Manjit Gill receiving the award on the restaurant’s behalf.

Speaking about the acclaim, Manjit said: “Everything goes hand in hand. Your food, your ambience, your service. It’s like a triangle, if one of those is missing, it doesn’t work.

“So we like to think we’ve got a winning formula. We’ve been going since 1966, we’re coming up to our 50th soon. So, we must have done something right,” he added.

Other big awards of the night included Curry Lover of the Year which went to Visit Bradford, while Frank Khalid of Chak89, Mitcham was crowned Curry King 2013. Stephen Gomes of Meluha, Bristol won Chef of the Year.

Of course, DESIblitz were also on hand to catch all the highlights of the night. Check out our exclusive footage and interviews with the winners here:

Speaking about the success of the evening, Yasmin Mahmood of Oceanic Consulting (who organised the entire event) said:

“To be amongst such passionate people who love what they do is truly inspiring. The English Curry Awards aims to recognise that dedication.

“It was a fantastic evening and I would like to thank everyone for attending and a big thank you to our sponsors. Congratulations to all our winner and finalists, and I hope to see you next year!”

The night was also a success for official Charity Partner, The Well Foundation, who raised an amazing £2,000 for those without clean and safe water in all parts of the world.

Here is the full list of winners of the 2013 English Curry Awards:

Takeaway of the Year

Congratulations to all of the winners of this year’s English Curry Awards 2013, in what was a truly spectacular evening for everyone. We definitely cannot wait for the fourth instalment of the Curry Awards in 2014!