The Growth of India’s Beer Market

India isn’t a typical beer guzzling nation but the wind of change might just be around the corner. DESIblitz explores the consumption trends.

"It is a personal choice. You can’t really dictate people what to do and how to their lives."

Beer. Drink that somehow has best of both worlds. The allurement of intoxication and the sanity of sobriety.

Adam’s new ale, as in a beer enthusiast’s parley, beer brews away your uptight schedule and leaves you with a tantalising feeling. People around the world have always banked upon beer to quench their thirst.

Change in demography, a better standard of living and a myriad of choices that 21st century Indian enjoys, beer has made inroads into India in last decade. Beer consumption, which once was considered as frivolous, now typifies a drastic lifestyle shift in an apt manner. 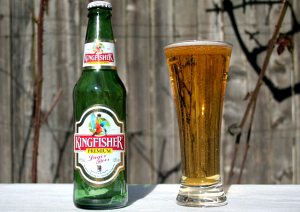 Consumption in India has increased into double digits in last decade. The nation enjoys a consumption rate that stands at 1.7 Litres/Year/Person, and a Compound Annual Growth Rate (CAGR) of 10 per cent over the last 5 years.

This ready acceptance of beer as a hearty beverage among people from various age groups has expedited the burgeoning of indigenous Indian beer brands.

Be it internationally the renowned Kingfisher beer, the global player such as Carlsberg and Tuborg, a more subtle one which goes by the name of Cobra or Kalyani Black Label which is one of India’s oldest lagers and more popular in Eastern India; people have acquired the smooth, mellowed taste of beer.

Take a look at the following statistics which substantiate this paradigm shift in the Indian beer market:

What might follow next should not be a surprise. With people from a younger age bracket acting as an impetus in driving the sales of beer across India, it is simply a matter of time before more companies get on-board to explore the nascent Indian beer market and hence contribute to the exponential growth taking place within the next couple of years.

Arnav, a college student says: “Beer is the best thing that has happened to the college goers. It helps you take the edge off without any serious side effects. Cheers to that!”

It is not just the male populace that is enamoured by beer. Miss Girdhar, a corporate employee, says:

“A pint of beer is a perfect after-work companion for me. Be it my home or clubs, beer just makes the cut. It is easy on your senses and affordable unlike whiskey or wine which leaves you sloshed and burns a hole in your pocket.”

Another important factor contributing to the increase in consumption is the variety of beer bars in India. The Beer Café and the Pint Room are two major players which dominate the market. Then there are the waterholes that cater to people from different walks of life. 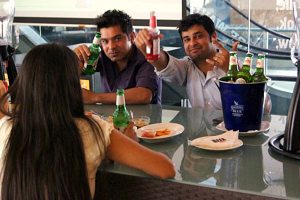 But does this indicate that people have finally broken the shackles of pretence and have indeed matured enough to make their own decisions when it comes to consumption of alcohol based drinks?

Have we crawled out from the abyss of pseudo-ethos and have embraced the reality of 21st century?

The quandary engenders from our thought process which is struck between personal appeasement and dogmatic outlook of Indian society.

People from different schools of thought emphatically state their view when it comes to beer consumption. Enthusiasts love this brewed benediction for multiple reasons: “I just can’t do without a beer,” says Sahil, an engineering graduate. 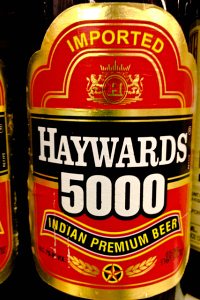 Next in line are the people who accept the fact that drinking beer is fine and the whole debate about drinkers and anti-drinkers has been blown out of proportion: “It is a personal choice. You can’t really dictate people what to do and how to their lives,” states Mr. Biswas.

Then there is the bloc of anti-drinkers whose scathing remarks about beer drinking might leave a bad taste in the mouth. Mr. Arora says: “Another west aping tendencies of ‘modern people’ who love to be rebels. Just wait and watch how this habit turns into a Pandora box.”

These views might sound poles apart but there is a middle ground here. There is an equilibrium plane, which has been overlooked due to the lack of inclusive thinking.

People who are against beer need to realise that taming thought processes and choices are the worst thing that can happen to a human. You can advise them, council them but imposing personal will on others is not an ideal solution.

For the beer connoisseurs, this might sound blunt around the edges but drinking beer is perfectly acceptable when you restrain yourself from over indulgence.

Dreamer by day and a writer by night, Ankit is a foodie, music lover and an MMA junkie. His motto to strive towards success is “Life is too short to wallow in sadness, so love a lot, laugh loudly and eat greedily.”
Winners of the English Curry Awards 2013
Food delights of Navratri