Vikesh Champaneri did it again! The young and incredible British Asian singer won the public votes and booked his place on The Voice UK Semi-Final!

Former X Factor runner-up, Olly Murs, is already one of his biggest fans.

A spectacular performance by the 19-year-old Vikesh Champaneri has ushered him through to the semi-final of series 4 of The Voice UK.

It was a nerve-racking evening for the British Asian singer at the quarter-finals on March 21, 2015, as he was the last semi-finalist announced on the show.

Lucy O’Byrne, who sang the Disney classic ‘When You Wish Upon A Star’ in an angelic gown, was the first to make it, after receiving a ‘fast pass’ from will.i.am.

Saved by public votes, Sheena McHugh, who stunned with ‘Glow’ by Ella Henderson, was the next to book her place in the semi-final.

Vikesh, ‘the king of bling’, could not be more thrilled to find out he had also secured enough public votes to continue competing in the reality singing show. 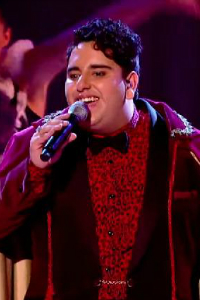 His theatrical performance of ‘Get The Party Started’ by Pink invited mixed reception. Nevertheless, it brilliantly brought out his ‘inner diva’ and won over the public.

Taking a few pages from Pink’s playbook, Vikesh sang in a flamboyant set with circus dancers and acrobats. It was in stark contrast to his stripped-down rendition of a James Brown classic at the Knockout rounds.

Vikesh performed with an overflowing confidence and impressed with his original interpretation of the 2001’s mega pop hit. His smooth yet powerful voice blended in perfectly with the groovy beats.

But it was his final move that wowed the audience and coaches. As he took the song to a climatic high note, Vikesh was lifted into the air by a hoop!

The amazing stunt, which had will.i.am written all over it, left everyone in awe of the young British Asian talent.

Vikesh commented afterwards: “For someone who’s never flown before and for someone who’s actually physically scared of heights, that’s like really really high. But it’s the most amazing experience ever. I’d love to do it again.”

Later on, he joined Lucy and Sheena for a ‘celebratory pizza’ at Zizzi to reward themselves for taking the full Team Will through to the semi-finals.

Despite the pressure of being in one of the biggest singing competition in the country, Vikesh is definitely one of the most easy-going contestants on the show.

Former X Factor runner-up, Olly Murs, is already one of his biggest fans:

His coach will.i.am absolutely adores his positive outlook: “I like hanging out with Vikesh as he always puts a smile on my face.”

He remained in good spirits even after will.i.am chose Lucy over him for the semi-final. Vikesh joked that he would ask for a sparkly microphone if he could return to the semi-finals.

There are high hopes for Vikesh, as will.i.am gives him a compliment that any singer would die for. He said:

“You don’t expect him to kick everybody’s butt, but he sings better than Marvin Gaye.”

The humble Vikesh responds: “I’m probably the most inexperienced out of everyone. I don’t have a record. I’ve never done a gig before in my life, so this is all new to me.”

His likeable personality, coupled with amazing singing potential, may just be what he needs to survive in this cut-throat competition.

Check out Vikesh’s take on one of Pink’s greatest hits here:

For next week’s semi-finals, Vikesh will compete against seven other contestants, including Lucy and Sheena from his own team.

All semi-finalists will take the stage with their respective coaches, in addition to their solo performances.

DESIblitz congratulates Vikesh on his success on the show and wishes him the best of luck in next week’s semi-finals!

Watch live performances by the final eight contestants of series 4 of The Voice UK on BBC One at 7pm on March 28, 2015 and vote for your favourite!