It’s the end of the road for Zayn Malik. DESIblitz explores the most fanatic and precious reactions to his departure from boyband One Direction.

"The day zayn changes his name from "zaynmalik1d" and his bio is the day i die."

As news of Zayn’s departure from the chart-topping boyband One Direction broke on March 25, 2015, fans around the world have tumbled into major meltdown.

Twitter is flooded with all sorts of emotion – anger, misery, denial. Hashtags such as #ZaynPain and #AlwaysInOurHeartsZaynMalik are trending like wildfire on social media.

Rumours of his exit from the band have been flying high since he left the band’s world tour after their gig in Hong Kong on March 19, 2015.

But never in a million years would any Directioner expect the 22-year-old pop star to quit the band.

While One Direction has confirmed the band will continue their career as a quartet, the transition period is going to be tough for their diehard fans.

For anyone who has ever idolised and worshipped a pop band, it is not hard to understand why Zayn calling it quits has shattered young hearts. 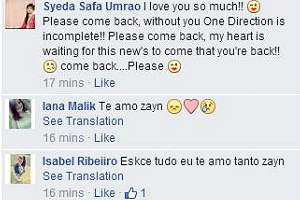 One Direction will never be the same without any one of its members.

Just like how Spice Girls, Take That and N’Sync struggled to sustain their stardom after Geri Halliwell, Robbie Williams and Justin Timberlake walked out on their band members.

If history has taught us anything, fans may not have much time left with One Direction. It only took Take That eight months to break up following Robbie’s departure. Ladbrokes has even updated the betting odd for the band to split in 2015 to 3/1.

With no time to waste, a fan named Katie P has started a fundraising campaign to buy the band. So far, it has raised US$196 (£131) and can do with every bit of help it can get in order to achieve a target of US$877 million (£587 million)!

WE AREN'T ASKING YOU TO SELL YOUR KIDNEYS IT'S ONLY $5 PLEASE DONATE #LETSBUYONEDIRECTION http://t.co/Ke3dqxOhQS

WHERE'S THE FAKE FANS WHO BUYS VIP TICKET SEATS AND OWNS EVERY 1D MERCH AND HAS RICH PARENTS? WE NEED YOU NOW!!! #LETSBUYONEDIRECTION

Let’s take a look at some other interesting reactions to Zayn’s exit from One Direction:

After crying at school, the pet store, and grocery store, I came home to go straight to my room and cry some more. #ZaynMalik

@zaynmalik I hope that you get back on track and straighten everything out.But I will still never forgive you. Thanks for everything tho

A proud moment for Bradford:

#ZaynMalik represented British Asians to the fullest.The bradford boy totally smashed it & I'm sure he will go on to do bigger&better things

Some have taken the news better than others:

Are they now called 0.8 Direction? #ZaynMalik

The sad news seems to have hit fellow band heartthrob Harry Styles the hardest, as he shed a few tears on stage during their world tour in Jakarta, Indonesia.

However, this exit may be a wise move for the stressed-out singer. Since forming One Direction in 2011, Zayn has been under media scrutiny over his drug scandal and personal relationships.

Growing up under the public eye is difficult enough. Lately, the Bradford singer has taken a further blow as the media repeatedly describes his engagement to Perrie Edwards to be on the rocks.

On top of all this is the pressure from how closely social media monitors every miniscule detail of his public and private life.

According to the official statement, Zayn decided to leave the band because he wants to be ‘a normal 22-year-old who is able to relax and have some private time out of the spotlight’.

It is clearly all too much to take for the young star for now and there is nothing wrong with taking some time out to deal with his struggles. 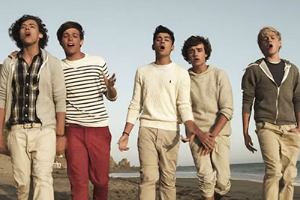 Understandably, some fans may also find it hard to cope with the sudden loss of a beloved band member.

Alarmed by a trending hashtag #cut4Zayn, a mental health charity has told distressed fans they should not be afraid or ashamed to ask for support.

A spokesperson from the charity, Mind, said: “Upsetting life events can spark feelings of distress or anxiety and it’s important to seek help if you are going through a difficult time.

The spokesperson stressed: “Self-harm is an incredibly serious problem and should never be trivialised. We urge those using Twitter or other social media sites at this time not to engage with posts that promote harmful behaviour, and to report any activity that causes them concern.”

As a prominent British Asian musician, Zayn has broken the mould of mainstream Caucasian boybands and helped promote charitable causes around the world.

DESIblitz wishes Zayn all the best in his recovery and future adventures!