Ushna Shah calls for Sexualisation of Women to Stop

Pakistani actress Ushna Shah has called for the sexualisation of women to end. Her statement came in response to a TikTok video.

"How about we normalise not sexualising a woman"

Her comments come in response to a TikTok video from Tizzyent. In the video, he reacts to a man asking whether a woman’s clothes are appropriate.

The woman is a teacher who is wearing a t-shirt and jeans.

Tizzyent responds to the man’s question and asks what he means by “is this appropriate for school?”

He said: “Pants? A top that covers everything? That’s the issue?

“Because she has a shape, it’s a problem for you?

“You know God damn well if she was built like SpongeBob SquarePants no one would have given two sh*ts and no would have taken the picture.”

Tizzyent then turned the tables on the man and pointed out that someone took a video of the woman without her consent.

He asked: “How about we talk about the fact that this woman is trying to educate children and do her job and she has some fool sexualising her?

“How about we normalise not sexualising a woman for having attributes that we desire? How about that?”

Ushna Shah reposted the video and said that if Tizzyent came to Pakistan, “his head would implode from the sexualisation of women”.

She then told men to listen to him. 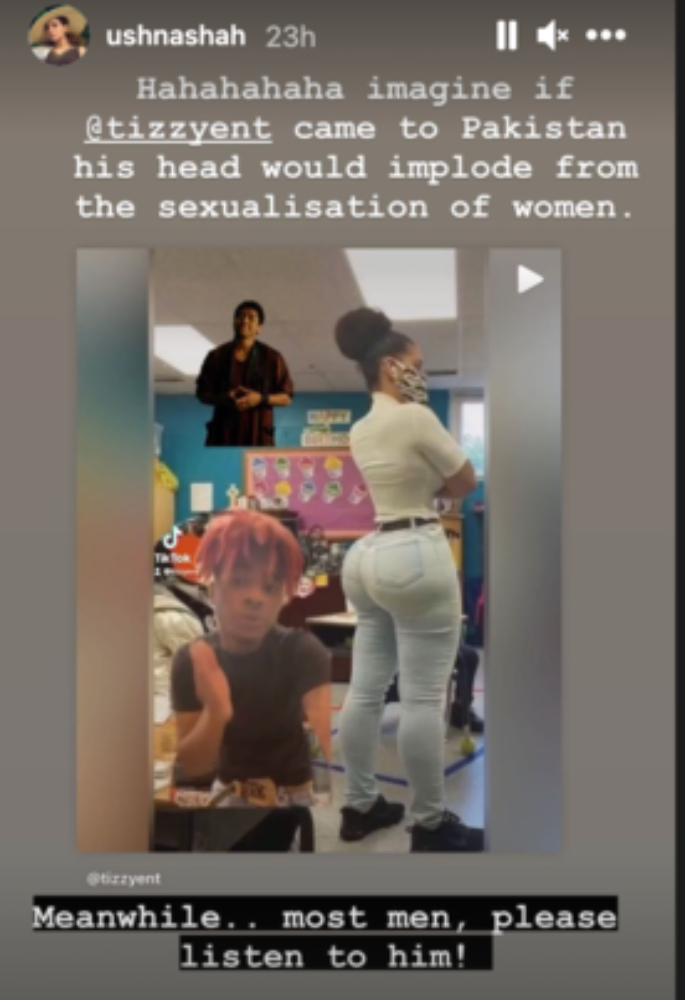 In response to the video, Ushna said that it is to do with the sexualisation of women. She wrote:

“It isn’t the clothes. It’s the sexualisation of our bodies.

“If an attribute is attractive to them, it’s inappropriate because they can’t control themselves.”

Often, women are viewed through a lens of attractiveness.

Depending on how much a man is attracted to a woman, clothes are appropriate or inappropriate.

Whether they are covered up or not, women and their bodies are being sexualised.

This means that men like the one who posted the initial video of the woman can sexualise them wearing jeans and a t-shirt.

Ushna Shah called for such behaviour to stop.

On the work front, Ushna is getting ready to work with Usama Ali Raza in a new TV series.

The pair previously worked together on the series Bashar Momin.

Dhiren is a journalism graduate with a passion for gaming, watching films and sports. He also enjoys cooking from time to time. His motto is to “Live life one day at a time.”
UKAFF 2021: ‘Gutter Boy’ seeks to spark Social Change
Adil Ray accused of ‘Judging’ co-host Charlotte Hawkins