The UK Asian Film Festival 2021 hosted the hard-hitting drama, ‘Gutter Boy: A Journey to Hell.’ We attended the screening to review the film.

"I thought for my first project I have to do this."

The film follows the story of the caste divide, societal segregation and the life-changing experience of a young man Sandeep.

This movie is an inspiring story following the main protagonist, Sandeep, whose spirit never dies.

Ajeet Kumar plays the challenging title role of a Sandeep.

Sandeep refuses to surrender under these circumstances.

Instead, he educates himself and works twice as hard, so he does not have to spend his life in the gutter.

The film raises an important point about the deaths that happen due to the toxic gases that develop in sewages.

The 58-minute movie is undoubtedly powerful. In under an hour, the viewers experience a journey of neglect, pain, and hope.

As an official partner of UKAFF 2021, DESIblitz attended the UK Premier of Gutter Boy: A Journey to Hell at Watermans London.

Let’s take a closer look at the film, with exclusive reactions from the director.

This movie follows the journey of Sandeep, who belongs to a poor, low-caste family.

The trailer for the film begins with an impactful dialogue:

“Once again, 2 employees of Municipal Corporation were killed cleaning the gutters.”

Sandeep is desperate to make something of himself and prove society wrong.

More importantly, Gutter Boy discusses how, as a society, some do not even consider the men cleaning their gutters as human.

Sandeep moves to New Delhi, aspiring for a better and somewhat normal life. Thus, he applies for multiple office jobs.

However, Sandeep is told that his caste and background makes him eligible for only one job, which is as a sewage cleaner.

This hard-hitting reality check is when Sandeep understands this will not be the kind of journey that he dreamt for himself.

His caste and background are what define him.

He did see people cleaning sewages, but he never imagined himself doing the same.

His first day at work inside a gutter in a plush colony, give him a very disgusting feel as a human being.

There is a point where Sandeep is scrubbing his hands so aggressively with soap and water. His cries echo in the bathroom.

He feels the human faeces on his body, with the smell of it on his soul.

Through vivid imagery and the heart-breaking cries of the gutter cleaners, Director Anupam highlights how dangerous this inhumane job is.

There was complete silence in the theatre, as the graphic, realistic images kept viewers captivated and engrossed in the screen.

Ultimately, this movie teaches lessons on the injustice behind classism.

It also raises important questions on how poor people risk their lives to feed their families.

Society and classism force people into poverty with very limited options. They are trapped in a cycle, torturing themselves to help the rich.

Gutter Boy and its Truth 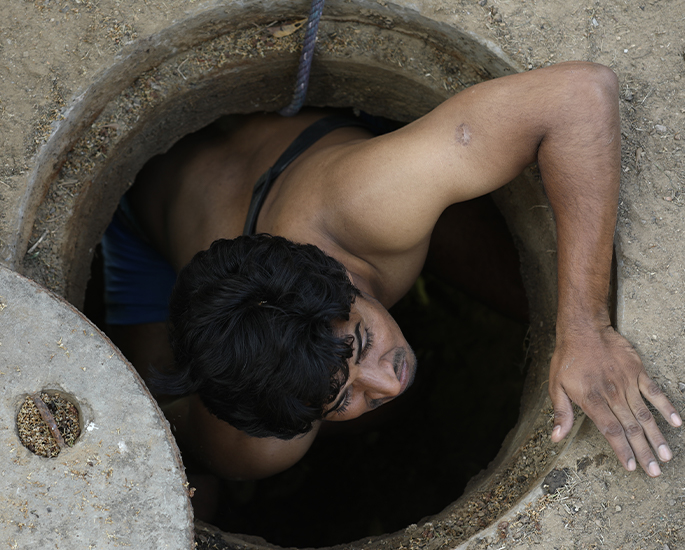 The director takes inspiration for this movie from real-life events. Director Anupam spoke to DESIblitz about the harsh realities:

Speaking of her inspiration for this movie, Anupam says:

“That news really shattered me, and I could not sleep for days.

“It is totally inhumane work. It is the 21st century and people are suffering a lot.

“I thought for my first project I have to do this.”

When one hears the words gutter or sewage, images of dirty water come to mind.

But this is the reality for many young men. They must clean this water in small tunnels, inhaling toxins and potentially risking their life.

This injustice is clearly depicted in this movie, with Anupam highlighting the way society treats the poor.

Ajeet Kumar effectively communicates this through his portrayal of Sandeep.

Sandeep’s heart-wrenching cries when cleaning the gutters emphasise the struggle and desperation of his character to live a better life.

This left the audience in shock over the excruciating pain gutter cleaners like Sandeep experience.

The story behind this movie is not fiction, it is the reality of thousands.

Many have unfortunately passed away as a result of the awful working conditions for gutter and sewage cleaners.

In 2020, the National Commission for Safai Karamcharis (NCSK) reported a total of 631 people had died in India while cleaning sewers and septic tanks during the preceding decade.

Subsequently, this has prompted many people to demand action from the government.

In addition, when police are willing to prosecute an employer, establishing who is responsible can be unclear.

State governments have also been accused of burying the problem, presenting low estimates for the number of scavengers working inside their borders.

The Hope for a Better Tomorrow

Gutter Boy: A Journey to Hell movie left the audience in anticipation. Will Sandeep achieve his goals of becoming successful?

There is a bittersweet ending to the film, with Sandeep finally accepting his fate.

Sandeep understands that this line of work is, unfortunately, meant for him. There is no escape.

However, Sandeep does not seem upset, especially as he has a family now.

Perhaps he still has hope for a better tomorrow, much like many people working in similar conditions.

Despite the troubles and dangers Sandeep potentially foes through, he will always have his family beside him. They love and appreciates the work he does.

The audience can identify themselves with Sandeep.

Despite the circumstances, everyone has hope. It can be healing for the soul to embrace a sense of optimism.

Sandeep relies on hope throughout most of the movie, guiding and powering him to continue working hard.

However, Anupam makes it clear that no matter how hard people like Sandeep dream, they only stay as dreams.

The movie has been selected for several other film festivals, including at the Bridge International Film Festival 2020.

There are other key cast members in the film. These include Laxmi Kant Baswala, playing the role of Radhe Shyam, and Ankit Mahna, portraying Usmaan Bhai.

There are only two words to describe the performance of these talented actors, raw and real.

The realistic and captivating acting is what makes this movie a success.

Much like the honest witting, these actors effectively execute the messages behind their dialogues.

Despite this movie having budgetary limits, it has come up trumps.

Watch the Trailer for Gutter Boy: A Journey to Hell here: 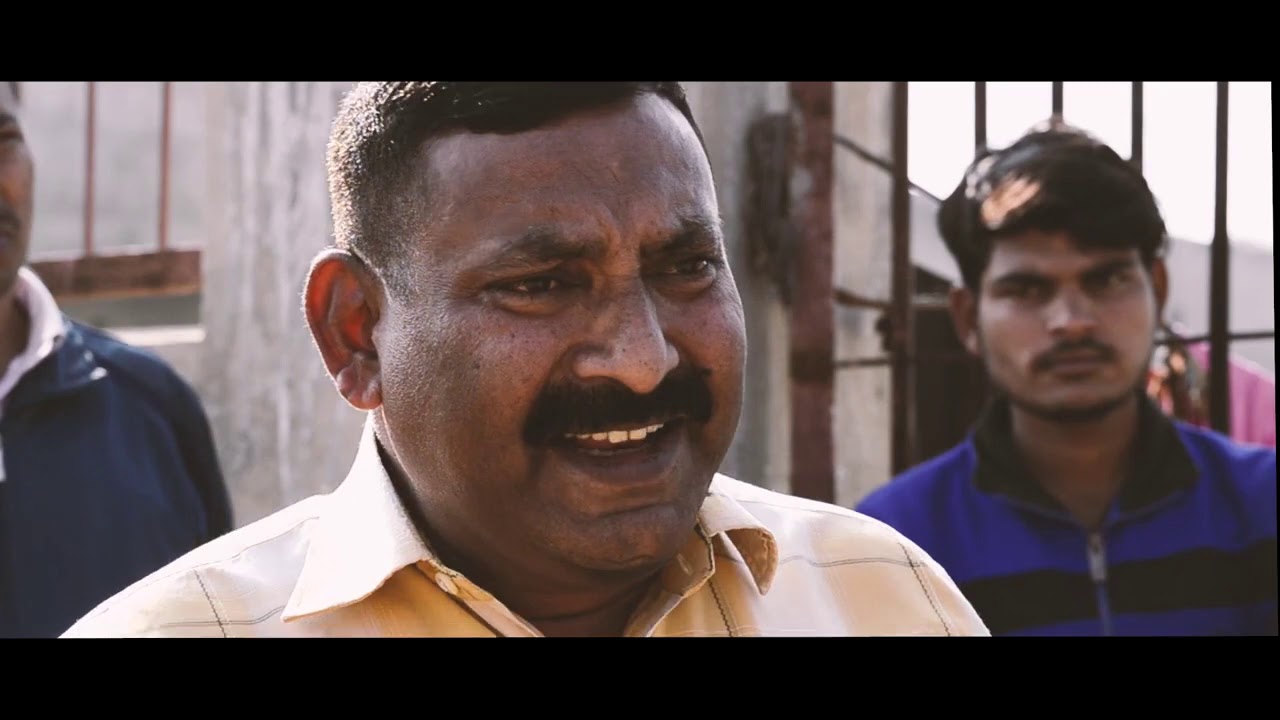 Director Anupam Khanna Baswal is from New Delhi, India. Before directing this inspirational movie, Anupam received a Masters in Mathematics and Bachelor in Education.

She then began to study film, which encouraged her to start a career in the movie industry.

“This is my direct target to the government, to the system, and society.”

“They don’t think about these people who are doing a lot for the country.”

Therefore, she dedicates this movie to ‘manual scavengers’ and the struggles they experience.

Anupam hopes to make a change with this movie.

She hopes Gutter Boy: A Journey to Hell will encourage conversations on the treatments of those living in poverty.

If you are interested in an insightful story on injustice, hope and pride, then Gutter Boy: A Journey to Hell will be the perfect film for you.

Harpal is a journalism student. Her passions include beauty, culture and raising awareness on social justice issues. Her motto is: “You are stronger than you know.”

Bollywood’s Kartik Aaryan Axed from another Film?
Ushna Shah calls for Sexualisation of Women to Stop