The Popularity of Pakistani Stage Dramas

Pakistani stage dramas are one of the most popular forms of entertainment. We look at some famous actors and shows which have contributed to its popularity.

sexual innuendo is prevalent throughout shows

There has been a lack of good drama in Pakistani culture as of late, but Pakistani stage dramas continue to remain popular.

Theatre in the country developed after the introduction of Urdu television dramas in the late sixties.

After the independence of Pakistan in 1947, several amateur theatre groups started performing including the Karachi Arts Theatre Society.

Theatre had produced Urdu plays in the 1960s when Enayatullah wrote that they had “infused the Pakistani theatre with new vigour”.

Pakistani stage dramas are popular because there are various genres to suit different preferences.

Actors such as Naseem Vicky have become renowned for their performances on stage.

We explore why Pakistani stage dramas are so popular. 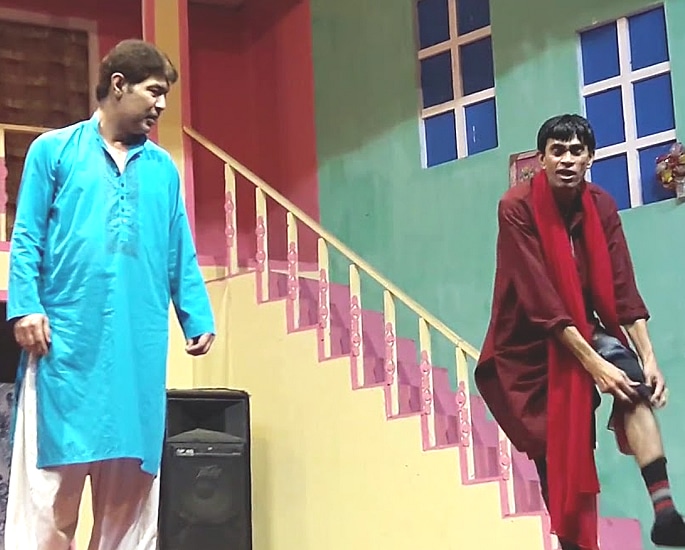 Stage drama is written to be performed on the stage. The basic challenge is to constantly frame all the elements contained within the script in terms of performance.

An adult audience comes to such theatres for healthy entertainment. Dramas like Janam Janam ki Maili Chaddar is one of the most famous products of stage dramas.

Nowadays, the stage has become a place for adult dance performances.

One thing to note is that many stage performances are not considered to be family-friendly.

The themes which are covered include corruption and indecency. Explicit language is constantly used and a lot of the female performers are often wearing revealing clothing.

While they are not for the family, a lot of adults thoroughly enjoy such stage dramas. 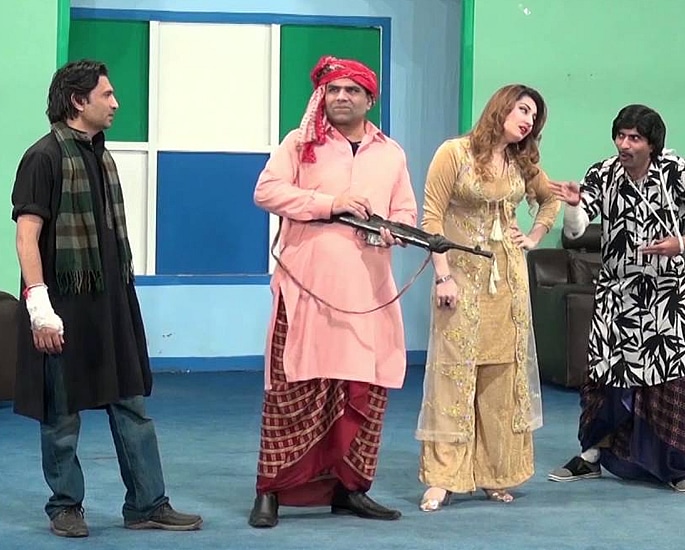 Pakistani stage dramas are immensely popular because there are different genres to attract various audience members.

The three most enjoyed genres all range in style but they guarantee filled theatres.

Comedy stage dramas are one of the most popular genres as sexual innuendo is prevalent throughout shows.

These dramas are characterised by taunts which are almost entirely of an adult nature.

However, it is usually done through wordplay which implies something else.

The sexual jokes are part of the play’s script but actors are given the freedom to add humour along the way within reason.

While the comedy seems cheap, the genre is arguably the most popular type of stage drama.

Mujra is one type which is highly enjoyed even though it is more of a dance performance.

It is a seductive and popular dance form performed by women.

These types of dramas can be seen as demeaning towards women as the actors are pressuring the actresses into dancing for their entertainment.

The Mujra performances are highly sensual which is why they have a huge male following.

Performers wear revealing clothing while some even take their clothes off while dancing.

These types of drama are typically told through dance and it is the raunchy style of dance which is what garners a huge following.

Tragedy dramas are designed to make the audience feel a range of emotions no matter the story.

Usually, the drama centres around a conflicting issue which may result in dire consequences as the drama progresses.

Elements of humour feature and adds to the entertainment value for the audience’s enjoyment.

Despite being more serious than comedies, sexual jokes are not so subtly made by the characters.

It is a genre which still relies on comedy despite having darker themes. 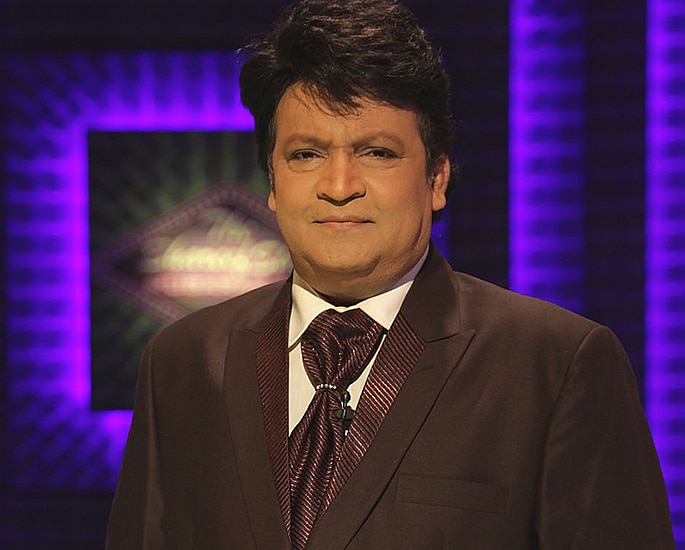 Umer Shareef is a Pakistani stage actor, comedian, writer, author, and director. He is regarded as one of the most successful comedians in the subcontinent.

He began his career at the age of 14 in Karachi as a stage performer. One of his most popular plays was Bakra Qistoon Pe.

The comedic actor’s success comes from the fact he recorded his stage shows in a similar style to films. 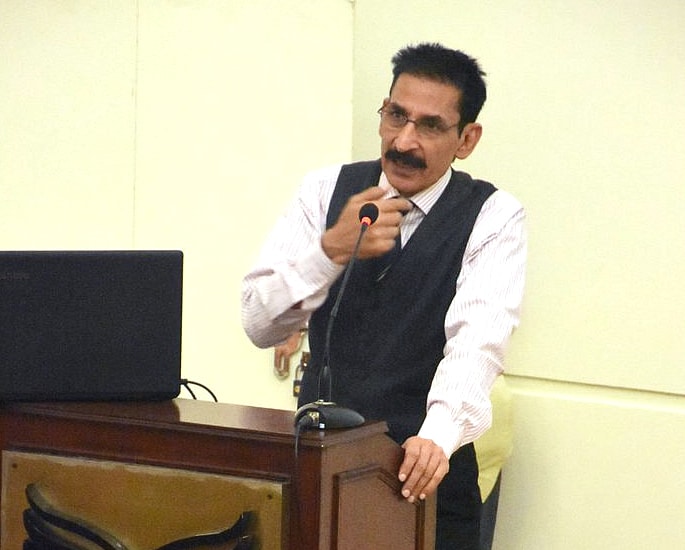 Iftikhar Thakur is a stand-up comedian and Pakistani Punjabi actor.

He has starred in numerous stage shows and various telefilms in different languages.

Iftikhar is considered to be one of the best stage comedians. Some of his best work is in comedy stage show Muhabbat CNG.

Pakistani stage dramas may still be popular but some have said the quality has declined.

Iftikhar has stated that the standard of plays can be improved if more attention was paid to them. He said:

“The government can restore the original beauty of stage plays if it paid serious attention to cultural festivals.” 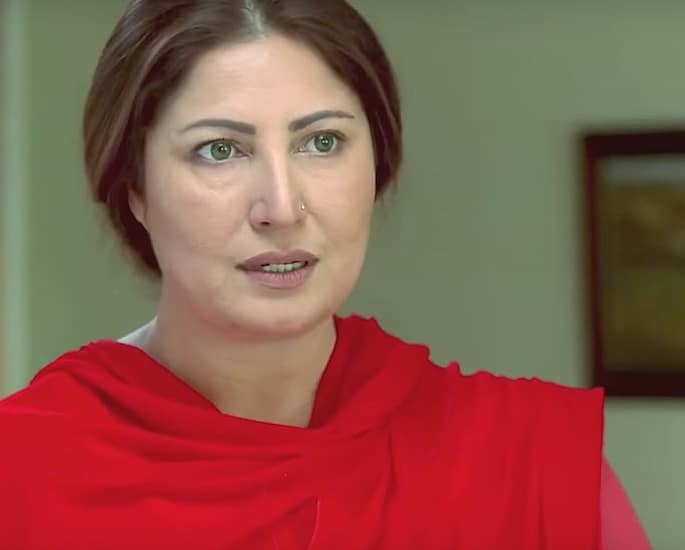 Saima Noor is a prominent stage actress but she has also starred in over 300 films.

She is considered one of the leading actresses of Lollywood during the 1990s and early 2000s.

Saima is known for her work in multiple genres, including action, romance and comedy.

The actress may not be in as many stage dramas, but she is still active in the Pakistani television industry.

As a TV actress, Saima has established herself as one of the highest paid Pakistani TV actresses in recent years. 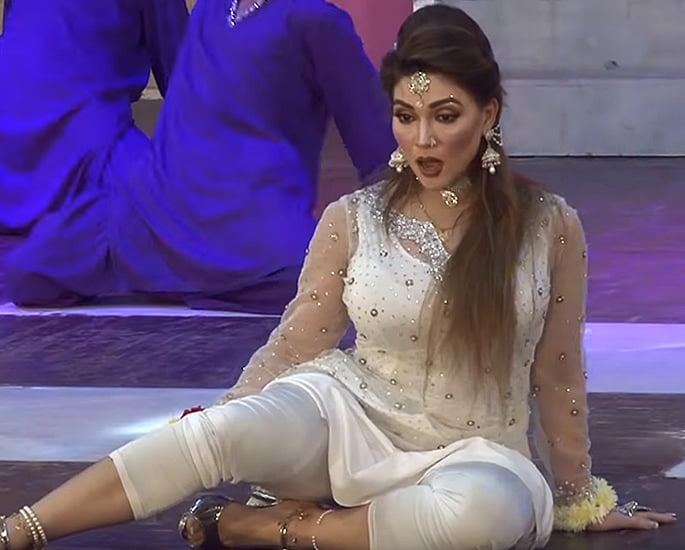 Khushboo is one of the most famous performers within Mujra stage dramas.

As a Mujra dancer, she has a huge male following and has starred in dozens of shows.

Khushboo turned to stage shows in 2000 after she struggled to attract attention in the films she starred in.

Her popularity is stage shows is down to the fact that she carries the dance form impressively. 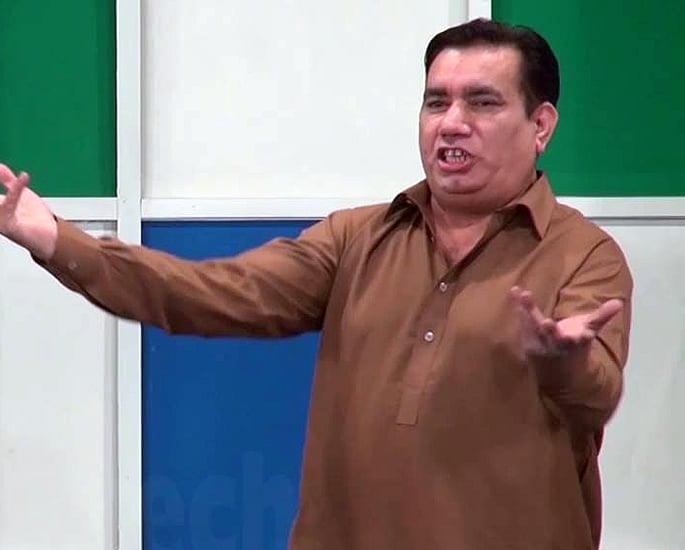 Nasir Chinyoti is a stage and TV actor as well as a comedian.

The Chiniot-born star is regarded as one of the best Pakistani comedians and has starred alongside other famous stage actors.

Nasir has starred in many stage dramas in various languages, including Urdu and Punjabi.

As an actor, he is best known for comedy stage dramas based in Lahore.

What makes Nasir so unique and popular is that he likes to improvise some of his dialogue during stage performances. 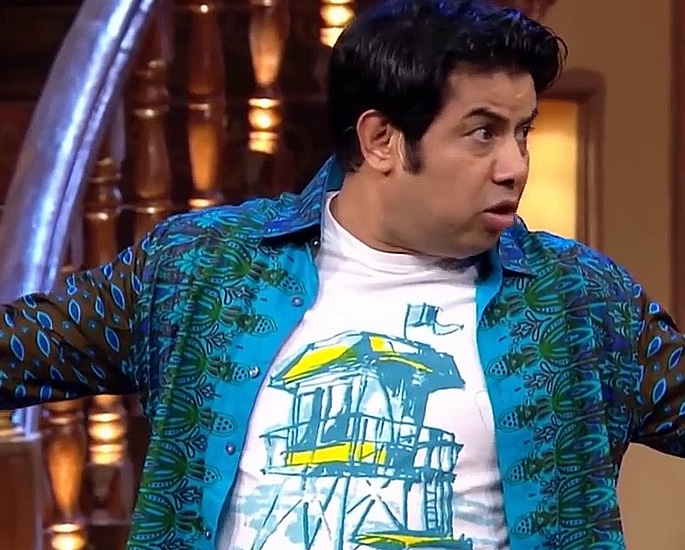 Naseem Vicky is a stage actor but he is also a TV host and comedian.

He was born in Faisalabad but is based in Lahore after moving there in 2000 in a bid to further his career.

Naseem starred in the popular Pakistani sitcom Family Front and has also appeared in many other comedy shows.

Naseem is also in Indian comedy TV shows, such as Comedy Nights Bachao as well as starring in comedy stage shows.

He is seen as one of the best comedic stage performers as he is easily able to execute jokes perfectly in order to get the audience laughing. 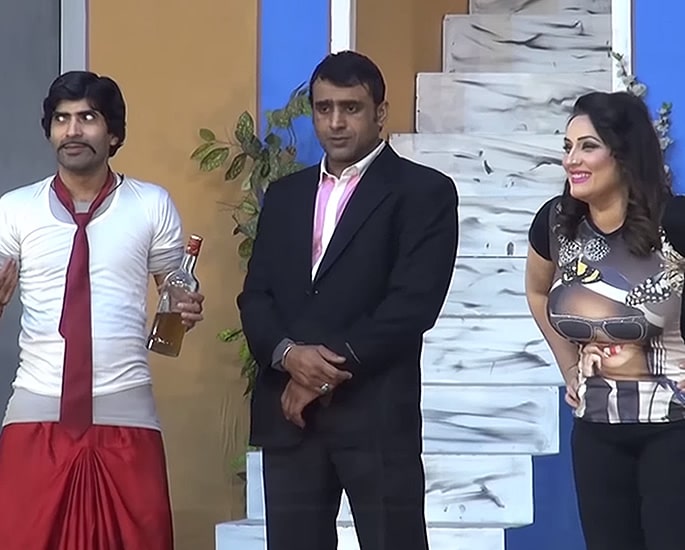 This comedy-drama appeared on stage in 2018 and is famous for its adult-themed jokes.

The actors use indecent language throughout and clearly make sexual jokes.

It is about a thief who breaks into a house and wants to steal everything that he can get his hands on.

As the title of the stage show suggests, Kotha 2 is based on the lives of prostitutes.

It is a Mujra drama as dancers perform on stage. Sexual themes are evident throughout the show.

In the stage show, the way in which women within prostitution are treated on a daily basis.

This stage is a mix of Mujra and comedy as Iftikhar Thakur provides the humour in his leading role.

Despite Khushboo dancing on stage, she also has a major role in the production.

Iftikhar Thakur plays a leading role in the drama alongside Amanat Chan.

The most prominent theme in Nazara Lain De is corruption as it explores how men marginalise women through the voyeuristic gaze.

However, it could be suggested that the women corrupt them as they are seen wearing revealing clothes. This results in the male characters constantly looking at the women’s bodies.

The story is about three men who are extremely flirtatious. They approach and flirt with every female character that appears on stage.

It is a story which intends to teach about the morals a man should have when approaching a woman.

Despite being popular among a certain demographic, Pakistani stage dramas have always been overlooked due to its sexual themes.

Obscenity is one of the major factors in them which prevents the public from enjoying stage dramas with family.

While a lot of people see them as indecent and vulgar, they receive a large following because it is part of the culture and audiences see stage shows as a form of escapism.

Sadia is an ambitious writer with interests in poetry and culture. She has a distinct interest in traditions and heritage. Her motto is "Write what should not be forgotten." by Isabel Allende.
Jaskirt Boora exhibits Migrant Stories at Blast! Photo Festival
Razia: A Story of Justice, Heritage & Feminism by Abda Khan