On 14th and 15th August 2014 respectively, Pakistan and India celebrated their 68th Independence Day. DESIblitz takes a look at how these two nations commemorated Independence Day and what hopes they have for their future.

India and Pakistan have welcomed 68 years of Independence.

One marks the freedom from British rule and the other the birth of a new state entirely; India and Pakistan have welcomed 68 years of Independence with jubilations all around.

Declared as a National Holiday in both nations, people swarmed the streets with flags and joined in the Government parades across the major cities.

The leaders of both countries also came out to address the populace. Along with the celebrations, they also highlighted the big economic and social feats that their respective countries still had to overcome. 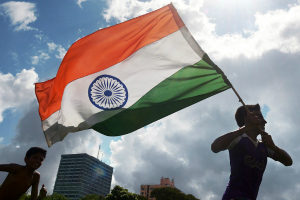 Born on the stroke of midnight, 15th August 1947, India finally declared its independence from the British Raj who had retained its long rule for centuries.

The then Prime Minister Jawarul Nehru said in his inaugural address: “Long years ago we made a tryst with destiny, and now the time comes when we shall redeem our pledge, not wholly or in full measure, but very substantially. At the stroke of the midnight hour, when the world sleeps, India will awake to life and freedom.”

For 2014, citizens of India celebrated their Independence by hoisting up the flags on flagpoles and decorating homes, cars as well as wearing the flag as decorative clothing. People enjoyed music playing as the national flag fluttered during the inauguration of the celebrations at Central Park in New Delhi.

During the rehearsals of the speech, school children made a pattern with saffron, green and white colours that read ’68? for the Independence Day function at the Red Fort in New Delhi. 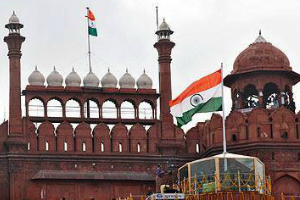 India now has high expectations for their new leader as he spoke about social and family responsibilities that needed to be pursued within the country.

Modi referred to the recent rape cases that have swept the country. He advised parents to take care of their children and raise them up better.

He added that that sex selection among rural communities also had to be countered. He insisted that girls should be given the same fair treatment as men, and not believe themselves to be inferior.

He also spoke of the current social issues that many people below the poverty line are still faced with. Of them include the issue of sanitation, where 638 million people are compelled to defecate in the open because they have no access to toilets.

Modi also mentioned his ambition to see India as a technologically advanced nation that could compete on a global level:

He also spoke very proudly of the 29 medals women athletes have won at the 2014 Commonwealth Games. 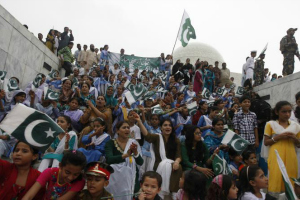 People all over Pakistan welcomed Independence Day, a day earlier to India. They dressed up in their flag colours, green and white.

The flag was hoisted on buildings, residences and at monuments at dawn. The streets and houses were decorated with lights, including candles and oil lamps.

The parliament house was decorated colourfully and lit brightly, and the day before Independence, a show of fireworks were displayed to commemorate.

Google also celebrated Pakistan’s Independence Day with a doodle, on their Pakistani homepage. The doodle consisted of the Pakistan Monument in Islamabad. The monument is a representation of Pakistan’s four provinces and three territories.

The celebrations for the 68th Independence Day started with 31 gun salutes in the Capital, and 21 gun salutes in Provincial Capitals. Prayers were also offered for peace.

The main flag hoisting was held at the Presidency in Islamabad where President Mamnoon Hussain and Prime Minister Nawaz Sharif took together to hoist the national flag.

Many military officers and Navy officers took part in the ceremony, and different cities held their own hoisting of the flag, including Islamabad, Lahore and Peshawar. 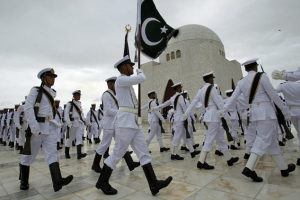 A relatively young country, Pakistan has had a turbulent upbringing. With allegations of corruption and election rigging in the upper levels of government, much of the public are becoming restless to bring about change by themselves.

Of them were party leaders Imran Khan and Tahir-ul-Qadri who led a 40 hour ‘Azadi’ march on the afternoon of the 14th from Lahore to Islamabad. They argued freedom and independence from corruption and were joined by hundreds of thousands of people.

Many are now calling for a return to the aspirations of the first Prime Minister and father of Pakistan: Quaid-e-Azam Muhammad Ali Jinnah and Allama Iqbal.

In response to the protests, the current Prime Minister Nawaz Sharif said: “Dictatorships have only brought us misery and trouble…Pakistan has no options but democracy.”

In his Independence Day speech just after midnight in Islamabad, Sharif also alluded to its neighbour saying:  “Pakistan and India could find new ways for promoting their relations. We are a peaceful country. We are striving for peace within the country and also want durable peace on our borders.”

With differing social and economic concerns hitting both countries, India and Pakistan are keen to unite their citizens and strive together towards a common goal. Both nations hope that this progression to a successful future can be effectively realised.