The fourth episode of Indian Summers was a thrilling game of scheming and manipulation. Ralph is adamant to retrieve the stolen documents from the inquest, while Aafrin is in continual fear of being found out. DESIblitz has more.

Episode four of Indian Summers welcomed more thrills and edge-of-your-seat excitement with the British colonials continuing to abuse their power over the Indian natives.

Mind games and manipulation sit heavily in the hearts of all of the British characters, and now they are reunited with their leader, the enigmatic Viceroy of India (played by Patrick Malahide), safari hat in tow.

Before Ralph can go and welcome him however, he is forced to deal with a fuming and unimpressed Eugene.

Eugene is fed up with Ralph taking sexual advantage over his sister Madeleine, and confronts him: “What are your intentions? Because Madeleine is a high prize.” 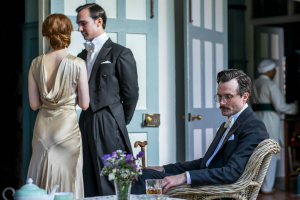 Ralph not liking the fact that he has been put on the spot, gives Madeleine up and wishes her a ‘safe passage’ home, leaving her understandably shocked.

The Private Secretary clearly has other things on his mind as he has to deal with the forged document linking Chandru Mohan to Gandhi’s Congress party, going missing.

Ralph who has already suspected that the letter has been ‘taken’, arranges for a new plan to return it.

Aafrin’s courageous move in stealing the evidence, uncovers a darker and more complex side to his persona that we have not seen before. We wonder why a straight up character like Aafrin, would risk his livelihood and ambitions in such a way.

The guilty conscious of the young Indian man is made more acute by Ralph showing him more favour than necessary. He sends a box of literature and books to Ralph plus an invitation to a round of golf.

Ralph’s reasons for the invitation become clear when the Viceroy joins them and very generously says to Aafrin: “Any man that can stand before a bullet, I think can look me in the eye, don’t you?” 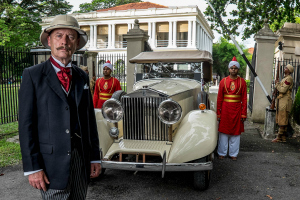 After, the Viceroy not so coyly asks Ralph about his relationship with a ‘young lady’ aka Madeleine, adding that 30 is a ‘serious age’. Ralph taking the hint, smoothly apologises to Madeleine for his rudeness earlier, and all seems well again.

Sarah’s lack of understanding of her exotic surroundings coupled with an inherent loneliness causes her to lash out at those around her. And top of her hit list are Leena and Alice.

Sarah receives confirmation that Alice’s husband is still alive, and that the young mother has been lying about being a widow. She confronts Alice and warns her that news of the truth could affect Ralph’s chance at the Viceroy job.

Alice bluntly asks: “What do you want?” To which Sarah replies: “To help, silly,” putting on her sweetest fake smile.

It is clear that writer Paul Rutman has not held back in offering viewers a taste of the extreme racist sentiments of the British.

Often ignored, ridiculed and mistreated, we see the native staff stand quietly as their masters don’t even attempt to disguise their loathing.

One wonders if Paul has actually downplayed the contempt to some extent for TV, and whether the true reality of that time was much harsher.

Cynthia has opted to take Ian McLeod under her wing as Armitage decides to return home to Fife: “40 years in this goddam stinking pit. My whole stinking life.”

Sadly, he dies on the train during the transit, and Ian is left to deal with landowner Ramu Sood. Ramu kindly offers Ian the chance to stay on as a manager, much to the chagrin of Cynthia who believes a British man should never be a subordinate.

Luckily, part of Cynthia’s motherly persona is her wish to get revenge on Ramu: “This is not how we do things… So now you see, Mr Sood is now a murderer!” 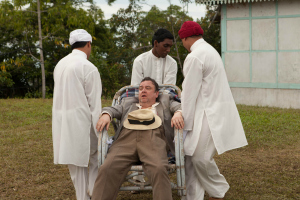 Ralph’s plans to uncover the culprit behind the stolen evidence becomes apparent in the evening when he hosts a dinner party for the Viceroy.

As Keane explains to him: “While we feast like kings, the superintendent will be popping around our houses looking under our mattresses.”

Distraught at being discovered, Aafrin enlists Alice (who is by now completely besotted by him) to take a note for Sooni through Sita. Alice rushes to a patiently waiting Sita, and there is a clear tension between the two over their mutual fondness of Aafrin.

Sita however is too scared to go to Aafrin’s house, and instead watches at the window while the house is searched.

A soldier uncovers Aafrin’s metal tin which encloses the document, and suddenly it’s game over for Aafrin. Or, is it? Ralph’s complex web of lies tangle even further as he opens up to Aafrin, and even asks him about Madeleine.

Later Aafrin returns home to find the evidence has gone, but mistakenly assumes that Sooni has destroyed it, and falls into a relaxed slumber.

Watch the trailer for episode five of Indian Summers here:

While we worry about what is to come for Aafrin, Adam (supposedly Ralph’s illegitimate half-cast son), wakes from a bad dream and rushes outside. But who should emerge from the trees and foliage to meet him? His mother.

Ralph is clearly two moves ahead in this chess game, but will he have seen this new twist coming? The next episode of Indian Summers will air on March 15th, 2015 at 9pm on Channel 4.

Aisha is an editor and a creative writer. Her passions include music, theatre, art and reading. Her motto is “Life is too short, so eat dessert first!”
Amitabh and Aamir launch Broken Horses trailer
PREMature uncovers the Vicious Circle of Life