Amitabh Bachchan and Aamir Khan launched the official trailer of Hollywood film Broken Horses. Directed by Vidhu Vinod Chopra, this is the first time an Indian filmmaker has created a film for Hollywood.

"It’s the first time ever that an Indian has written, directed and produced a Hollywood film."

The actors joined the legendary filmmaker for the unveiling of the fantastic new trailer for the film on March 10, 2015.

Chopra thanked the talented pair, saying: “I am grateful to Amitabh Bachchan and Aamir Khan who agreed to launch the trailer of my first Hollywood film Broken Horses.

“It is a very special film for me and special people launching the trailer will make the moment even more memorable.” 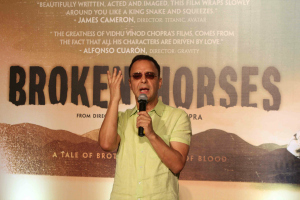 Chopra is notably the first Indian filmmaker to direct a Hollywood film. An incredible feat in itself, the director has been praised by the likes of Titanic and Avatar director James Cameron and Gravity director Alfonso Cuaron.

Mentioning how the entire experience has been a dream come true for him, Chopra said:

“Broken Horses is not a film for me; it’s a dream. I never thought that I will be able to write, produce and direct a film in English.

“I never thought that people like James Cameron and Alfonso Cuaron would say such nice words after watching the film. It’s a dream fulfilled for me.”

After Big B officially announced the new trailer, Aamir also said a few words to say: “It brings me great happiness to be here at the launch of Vinod’s first English film.

“It is really wonderful that one of our directors has made a film that has been liked by so many big Hollywood directors. And I am very impatient to see the film myself.”

Broken Horses follows the US-Mexico border gang wars. A thriller, the film touches on issues of loyalty, brotherhood and violence. It follows the journey of young musician, Jacob. 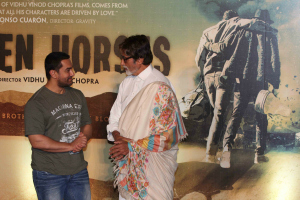 Jacob who left his hometown after his father’s death, returns to find that his older brother, Buddy is part of a drug gang, and has become a trained killer. Jacob must now help his brother who he abandoned so many years ago in any way he can.

An original concept from Chopra himself, Broken Horses is co-written by Abhijat Joshi.

Rumours of the English film being remade into Hindi are also making rounds, but Chopra insists that the possibility is still a long way off: “I haven’t thought of remaking it [the film yet].”

If there was such a film however, we are sure that both Amitabh Bachchan and Aamir Khan would be at the top of the casting list!

Chopra revels in taking his time with his films to ensure that everything is perfect. He explained at the launch:

“As a producer also, I take a long time. I don’t make too many films because it takes time. Broken Horses took me five years and PK also took us five years.”

“It takes time to make a good film. After watching this film, you will realise that a lot of work has been done in the film. It took me one and half years to find a location for this film.”

Chopra adds that the prospect of making a film in English for a Western audience was a daunting one:

“Making a film in Hollywood was extremely challenging, it’s the first time ever that an Indian has written, directed and produced a Hollywood film. But the challenge turned out to be a lot of fun. It was very fulfilling for me as a filmmaker.”

You can see the official extended trailer for Broken Horses here:

Chopra who has made some of India’s most memorable films like the Munnabhai series, 3 Idiots, Mission Kashmir, and Parinda can be sure to welcome another successful epic with Broken Horses.

Aisha is an editor and a creative writer. Her passions include music, theatre, art and reading. Her motto is “Life is too short, so eat dessert first!”
Love is lost and found in PREMature
The British Raj abuses power in Indian Summers