Bollywood can be very creative when it comes to sex scenes. Here’s a look at the best ones that you can recreate with your partner.

"It's about building an emotional connection"

Bollywood sex scenes may be hard to find but there are plenty of bold options out there.

When the director does add one it can even make us want to try it out.

Some are so good that you will want to recreate them with your partner.

Scenes that involve paint, blindfolds, rain, fire and even a cave. But which ones are the best?

This is the list of the most well-executed sex scenes in Bollywood and tips on how you can perform them with your partner. There are tips on everything from seduction to foreplay.

There are also suggestions on different locations you can take your lovemaking.

We will look at props you will need to make things more exciting, just like in the movies.

Whoever said Bollywood is dull is watching the wrong movies. Read on to find out how to get all hot and bothered.

Hopefully, you already know that foreplay is extremely important for a healthy sex life.

Without foreplay, it just won’t be as enjoyable for either of you. Foreplay is all about building that sexual tension.

Your partner should be turned on before they are even down to their underwear. The way to do this is by touching them all over their body, apart from the obvious places.

Kissing areas like the neck, stomach and thighs are great ways to make your partner tremble all over.

Emraan Hashmi is known as the serial kisser of Bollywood for a reason.

His Murder movie franchise is a great example of the tease. In Murder (2004) he has Mallika Sherawat shaking with excitement as he grazes his fingers slowly over her skin.

In Murder 2 (2011) he has a very sensual scene with Jacqueline Fernandez and there is a lot of kissing before any clothes come off. She also teases him by getting on top of him.

“Foreplay can help a couple feel closer and more intimate, which ultimately may lead both partners to feel more aroused.

“It’s about building an emotional connection and getting some excitement going.”

Teasing can equally be done by you and your partner. Make it a challenge to see which one of you can’t take the sexual tension anymore. The sex will be mind-blowing after all the build-up. 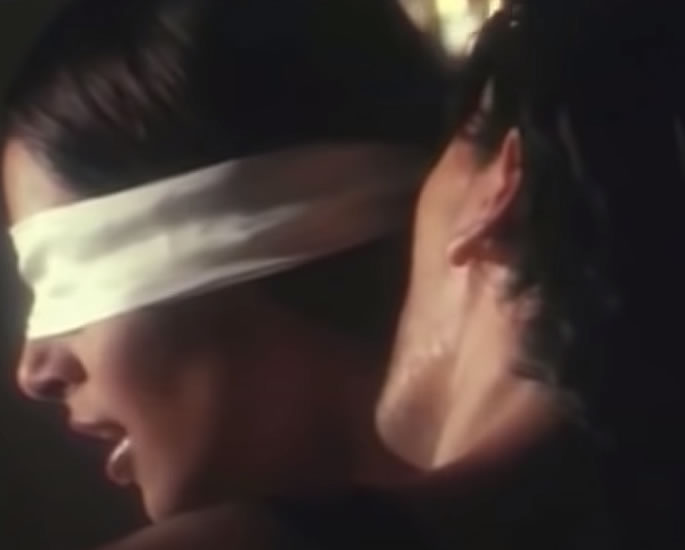 If your partner is blindfolded, they have no idea where you will touch or kiss them next and that makes the anticipation palpitating.

After your partner is blindfolded, lay them down on the bed.

John takes a cold glass full of ice and slides it over Bipasha’s body. The feeling of cold mixed with your partner’s feelings of sexual excitement will really amp up the tension.

Use the ice cubes as well by rubbing them slowly over your partner’s stomach. This is sure to drive them crazy.

“The contrast of the cold on your hot body in a warm room floods the body with a rush of sensations that can be incredibly stimulating.”

Bipasha and John also have sex on the beach in the movie. Having sex outside the bedroom is important if you want to keep things fresh. Sex outdoors is thrilling.

The possibility of being caught adds excitement although a secluded beach like the one in the film is best. You don’t want to end up getting arrested.

One of the best Bollywood sex scenes in the film is when she seduces Arunoday Singh.

He is sitting at a table in a bar and she dances in front of him, first with a man and then with another woman. She keeps her eyes on Arunoday the whole time.

The two were strangers in the movie but you can still recreate this scene with your partner. Roleplay is a kinky way to mix things up and that’s what you can do here.

Your partner will enjoy watching you dance whether you do it alone or with others.

If you book a nice hotel with a bar, you can lead your partner to the bedroom after the dance.

That’s just what Sunny does and then she takes off her dress to reveal a stunning set of red lingerie, complete with stockings.

Dressing up for your partner is a nice way to show appreciation.

“Men are visual and lingerie spices things up. It’s a form of foreplay without words.”

Sunny has control in this situation and you can do the same. Keep your heels on as you straddle your partner to really drive him wild.

There was a very original bedroom scene in Ranveer Singh and Deepika Padukone’s RamLeela (2013). This was the film that made incense sexy thanks to the song ‘Ang Laga De’.

In the song, Deepika gracefully moves around the room, spreading the aromatic incense. She also gets onto the bed and spreads it while seductively moving her body.

It isn’t long before Ranveer, who has been watching, goes to her and leads to a very passionate kiss. The couple, unfortunately, gets interrupted but you and your partner don’t have to.

To recreate this Bollywood sex scene, you will need some incense. Put on some music, you can even use ‘Ang Laga De’ to really get into the right mood.

Dance for your partner as you spread the incense around, allowing them to watch you as you move.

It is the smoke from the incense that creates a sexy, romantic atmosphere.

Make sure you dance for a while to really build up the sexual tension. Your partner will be dying to get their hands on you but making them wait will drive them crazy.

When neither of you can take it anymore, move the incense aside and have a kiss full of passion just like Ranveer and Deepika. Unlike them, make sure you take it all the way.

Rang Rasiya (2008) has one of the most creative Bollywood sex scenes and it involves a lot of paint.

After Randeep Hooda paints a portrait of Nandana Sen, things start to get steamy.

Randeep takes some paint and with his hands starts to spread it over Nandana’s body.

He also pulls off her jewellery in the process. The way he spreads the paint is very sensual.

The floor ends up covered in paint as do the two actors who proceed to make love. To recreate this scene you will, of course, need some paint and paintbrushes.

Feel free to use your hands to spread paint over each other but if you really want to build up the tension, use a paintbrush. You can then slowly paint your partner wherever you wish.

There will be a mess to clean up afterwards but it will be worth it after all the passion.

Having sex by the fire has been seen a few times in Bollywood movies and is a great one to recreate. All you need to do is arrange a camping trip.

Once you’re out in nature, you can build a raging fire and lay down your blankets. For inspiration, you can watch Akshay Kumar and Karisma Kapoor’s Deedar (1992).

Their scene is set in a stable and Akshay sets about building the fire. It is this hot and blazing fire that really sets the mood as Karisma tries to seduce him with song.

Refusing to give in to your lover immediately is a good tease so add that in as roleplay.

The fire and the night around you are sure to add to the sexy mood.

Another great example of sex by the fire is in Parched (2015). Radhika Apte is seen in this film which caused a lot of controversy when it came out, partly due to this sex scene.

It is certainly one of the boldest scenes and the sex is in a cave this time, by a roaring fire.

The sex is rough and passionate and the lovers are hungry with desire for each other.

It’s clear the sex adds to the heat of the moment and is definitely one of the best Bollywood sex scenes to recreate with your partner.

Rain is probably Bollywood’s favourite weather element when it comes to romance.

There are plenty of movies that show there is something magical about kissing in the rain. One of those is Aashiqui 2 (2013).

The Aditya Roy Kapur and Shraddha Kapoor film features a lovely scene that begins with them kissing in the rain. Aditya then carries Shraddha inside to the bedroom where they make love.

There is something very tender and innocent about the whole scene and it’s another Bollywood scene you can recreate with your partner. For this, you will have to wait for it to rain.

Once it does, go outside and sing, dance and kiss each other in the rain. The feeling of the water won’t bother you as you will be too caught up in the moment.

If you don’t fancy getting really wet, take one umbrella and share it.

There is something about kissing in the rain that will bring you and your partner closer together.

After getting all wet, you can take it back inside to the bedroom and dry off by getting all hot and sweaty between the sheets. Monsoon season is known as the season of love in India.

It’s no wonder there are so many romantic Bollywood scenes in the rain. Take your partner and recreate this scene to find out why for yourselves.

But, remember what they say? The best part of fighting is what comes afterwards, the make-up sex.

There is one stand-out scene in Ki & Ka (2016) that starred Kareena Kapoor Khan and Arjun Kapoor. The couple are having an almighty fight, although Kareena is the one doing all the shouting.

They end up on the bed after she pushes Arjun onto it and whilst she is shouting, he starts to kiss her. This results in the most mind-blowing sex.

Being turned on after an argument is nothing to feel weird about either. Psychologist Megan Fleming explains:

“Arguing is arousing physiologically, as is fear and excitement, so the body is turned on.

The next time your partner is shouting, why not shut them up with a kiss.

You don’t have to finish the fight and the making-up can start that much sooner.

Bollywood has many other options when it comes to sex scenes but these are by far the boldest ones of all.

They will require a little imagination, a new location or some props.

Whether you are adding roleplay to your sex life, or something as simple as new lingerie, these are great scenes to take inspiration from.

Use them as research and feel free to find more.

Bollywood sex scenes are easy to recreate with your partner once you put your mind to it.

That extra effort will surely result in added pleasure and fun for both of you.

Dal is a Journalism graduate who loves sports, travelling, Bollywood and fitness. Her favourite quote is, “I can accept failure, but I can't accept not trying,” by Michael Jordan.
12 Best Desi Beards in Bollywood & Beyond
How Milind Soman stays Fit at 55