Teeing up with Golfer Daanyal Spalding

British Asian Golfer, Daanyal ‘Dan’ Spalding has taken the first step in his desire to conquer the world of golf. Turning professional in March 2013, this young birdie is set to soar as high as an eagle.

"[I'm] looking at representing Pakistan in the Olympics and hopefully the World Cup as well."

Birmingham born Daanyal Spalding has grown up on a diet of nothing but golf. 2013 has been a huge year for this 18-year-old golfer, having turned professional in March. Now he is on the road to become one of the biggest British Asian golfers in the world.

Daanyal was born in Hall Green, Birmingham on January 25, 1995. This was also the same year that Daanyal’s hero Tiger Woods entered his first major Masters championship. Little did anybody know what the new born baby Spalding would one day become.

Daanyal is of a mixed heritage background. His father Ronnie, hails from Edinburgh in Scotland while his mother Ruby, comes from much humbler surroundings of Sialkot in Pakistan. Passionate golfer Ronnie, who manages a golf store, has been the biggest influence for Daanyal since he could walk: 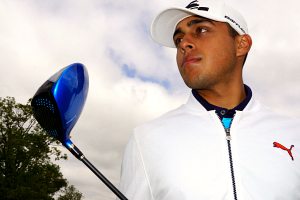 “He’s had a great influence obviously. He works at the golf shop and teaches himself, and he’s helped me along. Without him, I wouldn’t be here today,” Daanyal admits.

By the time Daanyal turned 4 years old, he was already taking junior lessons at the world famous Belfry Golf Club. It was here that he won his first tournament 6 years later – the 2005 Junior Club Championship:

“As early as I can remember really, I grew up loving the game and found out I was good enough and then I started taking it seriously when I was about 8 years old. I obviously got to County level when I was about 10 or 11 and it’s just progressed ever since then,” Spalding says.

Whilst Daanyal has been brought up in England, his British culture has been as equally embraced as his Pakistani culture. Daanyal is incredibly proud to have strong allegiances to his Mother’s homeland.

This was further enhanced when he visited Pakistan as a young lad and was fortunate enough to experience the unique culture of the country: 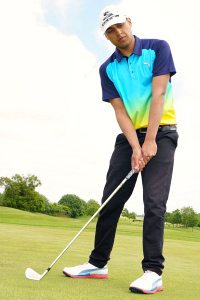 “I’ve played one of the Army courses out there, I was really impressed with it. I thought it was pretty similar to how golf courses are laid out here. Condition wise, they’re just as good, if not better over there – they’re really well-maintained.”

Holding a dual nationality, Daanyal would love nothing more than to represent Pakistan at International level. He already has one eye on the 2016 Rio de Janeiro Olympic Games:

“[My] long term goals [are] to get onto main tournaments and win majors but [I’m] also looking at representing Pakistan in the Olympics and hopefully the World Cup as well.”

As a child, Daanyal spent most of his spare time practising golf and copying techniques from watching golfers, in the hope of turning professional himself one day. Dad Ronnie took Daanyal to the major golf events all over the UK, especially when Tiger Woods was in his pomp.

Sacrifices were also made by mum Ruby who, along with Ronnie, was incredibly supportive of young Daanyal’s golfing passion. Always encouraging their son and traipsing for miles watching him take part. Daanyal fully acknowledges that his Parents sacrifices are what has helped him achieve what he has so far, and quite an achievement that is.

Only 18 years of age and still a student, Daanyal is currently studying Sixth Form at Tudor Grange School in Solihull. It was a school which interestingly, former golfer Peter McEvoy also attended.

In only a short space of time, Daanyal has achieved an extraordinary amount. In 2005, at the age of 10 he became the Junior Club Champion of the Belfry Golf Club. At 14, he won 3 events on the British Junior Golf tour. 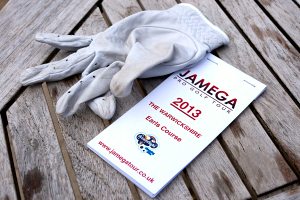 In 2011, he qualified for the British Open Final Stages, and soon after he was selected for the England Regional Squad.

Daanyal’s childhood dream finally came true in March 2013 when he became a fully-fledged professional Golfer. He made his professional début at the Jamega Professional Golf Tour at the Burnham and Berrow Golf Course. All the hard work and sacrifices had paid off. Daanyal knows all too well however, that this is just the start of his journey.

In between studying, Daanyal aims to compete in more than 25 events this season, some of which will be part of the Europro Golf Tour and will further enhance his profile, which will also be watched by a global audience, thanks to satellite coverage. 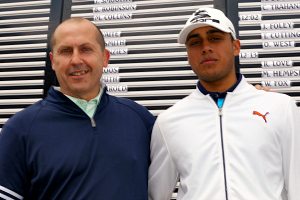 Upon turning professional, his proud father Ronnie said: “I am extremely proud of my son. His dedication to his sport through all these years is awe inspiring and is an example to all.”

Ronnie also spoke admirably about Daanyal’s character, saying: “Daanyal has faced many setbacks along the way, including injury and surgery, but has stayed strong and focused on his goal. This shows strength of character and an inner belief.”

Looking to the future, Daanyal would like to be a role model for young Asian golfers and instil in them the same level of determination, ambition, hard work and sacrifices that he himself has always had:

“It takes a lot of hard work and practice, you have to dedicate your life to it and make a lot of sacrifices, but if that’s what you enjoy doing then it’s worthwhile doing.”

In addition to moral support and encouragement, part of a sportsman’s development inevitably has a financial cost. This is something that Daanyal has struggled with as a young Asian sportsman.

By playing all the events of a typical season, the costs of such would be in the region of £20,000 and sponsors would be the best way forward for the talented youngster.

The humble lad has said of his journey so far: “I have always stayed true to my faith and this has made me a better and stronger minded individual.”

He expressed gratitude also to the people around him, saying: “I am truly thankful to everybody for their support; it is a real team effort. I feel blessed to be able to play golf for a living and to participate in a sport I love.”

Spalding is aiming to achieve the sporting heights that his hero Tiger Woods did. With an endeavour like that, he may not be far off.

Rupen has been passionate about writing since childhood. Tanzanian born, Rupen grew up in London and also lived and studied in exotic India and vibrant Liverpool. His motto is: “Think positive and the rest will follow.”
Premier League Football 2013/2014 Week 14
India win Kabaddi World Cup 2013