Sridevi drowned in Bathtub after being Unconscious say Police

Information on the death of Sridevi has been revealed by Dubai police following a post-mortem analysis. Stating that she died from ‘accidental drowning’.

"death of Indian actress #Sridevi occurred due to drowning"

Dubai police have revealed more information on the cause of death of Bollywood actress Sridevi, who sadly passed away on Saturday 24 February at the age of 54.

The original reports in India stated that she has died due to a cardiac arrest as quoted by her brother-in-law Sanjay Kapoor.

However, now it has been revealed by police officials in Dubai that the actress Sridevi accidentally drowned in the bathtub after losing consciousness in her hotel room.

There are also reports from Dubai police officials that she was under the influence of alcohol at the time.  They found traces of alcohol in her body and they think that she lost her balance and fell into the bathtub and subsequently, drowned.  Investigations are still ongoing.

Dubai police tweeted and confirmed the details of her demise:

“Following the completion of post-mortem analysis, #DubaiPolice today stated that the death of Indian actress #Sridevi occurred due to drowning in her hotel apartment’s bathtub following loss of consciousness.”

A formal document showing the cause of death of Sridevi Boney Kapoor Ayyappan was provided. Albeit the spelling of ‘drowning’ is incorrect. 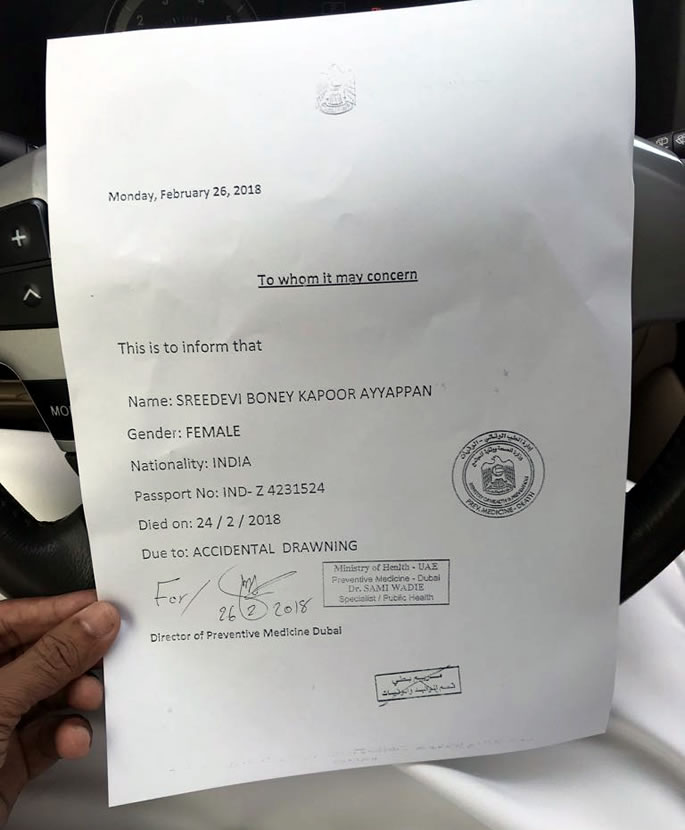 Sridevi was immediately rushed to Rashid Hospital in Dubai and sources at the Indian Consulate say that she was dead-on-arrival at the hospital.

The case has now been handed over to Dubai’s public prosecution office, for further processing. The death certificate has been issued and her body is to be charged to the Indian Consulate in Dubai for return back to India.

Meanwhile, utterly shaken by the news, Bollywood stars, fans and the public have been paying respects to the highly regarded actress in Mumbai, India. People gathered at her residence to mourn her death. 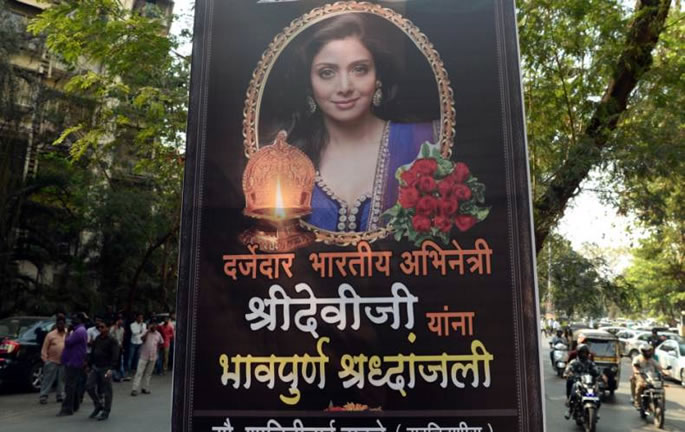 Hailed as one of the most iconic actresses in Bollywood and Indian cinema, Sridevi was attending a family wedding with her husband and daughter in Dubai when she passed away due to these unfortunate circumstances now revealed by Dubai police.

Nazhat is an ambitious 'Desi' woman with interests in news and lifestyle. As a writer with a determined journalistic flair, she firmly believes in the motto "an investment in knowledge pays the best interest," by Benjamin Franklin.
The Oscars and its Slow Journey towards Diversity
5 Best Moments from Guz Khan’s Man Like Mobeen