Sonika Vaid, a Desi American contestant of American Idol, has booked her place in the final 8 with another sensational performance.

Her rendition of ‘Bring Me To Life’ rendered her a serious contender.

Desi American student Sonika Vaid continues her streak on the final season of American Idol , advancing into the Top 8.

The 20-year-old from Massachusetts chooses to sing ‘Since U Been Gone’ by the first ever American Idol winner, Kelly Clarkson.

Introducing the Grammy-winning pop rock smash hit, Sonika says: “You’re going to see a side of Sonika that’s kind of an angry girlfriend.

“I’ve never had a boyfriend, but I’m going to be an angry girlfriend.”

Sonika then belts out the powerful song and strikes an impossibly high note with perfection. 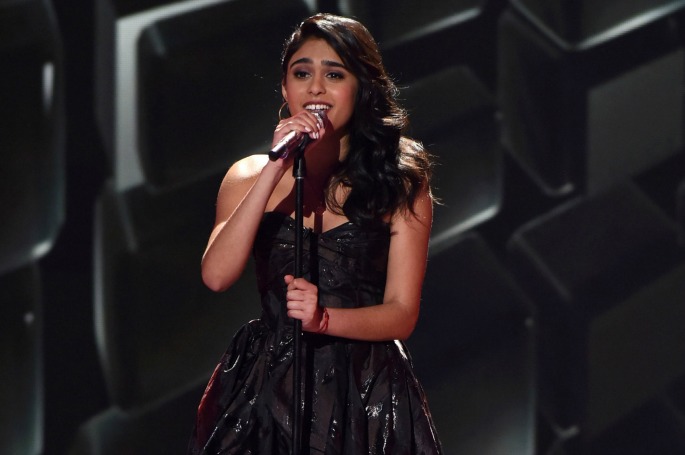 The judges – Keith Urban, Jennifer Lopez and Harry Connick Jr – are impressed once more with her performance, but advises the young Desi singing sensation to bring out her emotion more.

J-Lo echoes: “You have to get lost in the character in your head… You have to let go, you can’t be thinking about the notes.”

Watch Sonika sing ‘Since U Been Gone’ here:

Sonika was born to Kuldip and Ananya, who moved from India to the US as young kids. Shy and quiet, she has been playing the piano since four years old because ‘I could hide my face behind the piano’.

But she could not hide her singing prowess, having won a talent show in school in ninth grade and now being tipped to win the final American Idol.

Right from her audition in Denver (‘Look At Me’ by Carrie Underwood) to her heartfelt rendition of ‘I Surrender’ by Celine Dion, the judges and audience have been singing praises about the Desi star in the making.

J-Lo even describes her as being gifted with a voice from God:

“I said your voice was from God, it’s so true!

“I don’t think I’ve ever gotten goosies on my face. That was the first time!”

But it was Sonika’s performance of Evanescence’s rock anthem ‘Bring Me To Life’ that brought down the house and rendered her a serious contender on the show.

Here are the final eight contestants of Season 15 of American Idol:

The next episode of American Idol will see another double elimination. Sonika will have to pull out all the stops to secure her place in the Top 6.