In Desi Rascals 2, Solomon Akhtar has moved on from Yasmin Karimi, and is now in full pursuit of Kavita Sodha. But does she feel the same way?

“So we kind of held hands, basically.”

In Desi Rascals 2, Solomon Akhtar is no longer besotted by the ‘mermaid’ Yasmin, and now has the hots for Kavita.

In the previous episode, he took Kavita out to the cinema, and she warmed to his unconventional charm.

In the fifth episode which airs tonight at 8pm on Sky 1, Solomon talks to BFF Adam Michaelidies about the date.

Solomon describes how he tries the ‘yawn move’ to put his arm around Kav. But he says: “The arm rest was in the way, dude.”

However, the persistent Solly can navigate obstacles, saying: “I had to put my arm in her lap.

“Obviously it was a bit weird. She was just, kind of, looking at it. But then she kind of grabbed it a little bit.

“So we kind of held hands, basically.”

Result! Get in, Solly! 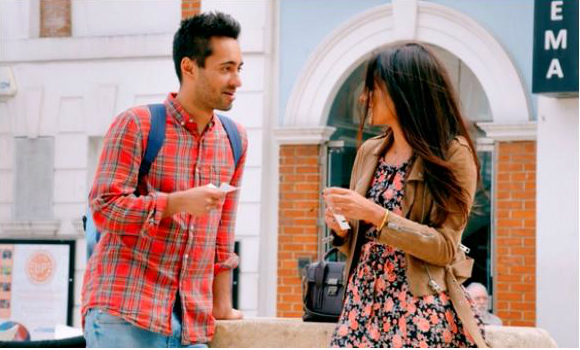 Solomon resolves to ask Kavita out on a second date. But does Kavita feel the same way about Solly?

Maybe not! When Solly proposes the idea, Kavita says: “Yeah, I want to hang out. But at the moment, I do want to just hang out as friends.

She continues: “I just don’t want to get intense with anyone right now.”

A bit taken aback, Solly responds: “But it would be cool to call it a date obviously?”

Kavita replies: “No, I don’t want it to be a date like that.”

What will happen between these two young lovers?

Also in tonight’s episode, Jason takes a ride in Adam’s Ferrari. How will the lads respond?

And Owais makes a call to a mystery lady.

You can catch the fifth episode of Desi Rascals 2, tonight at 8pm on Sky 1.