A shocking video has emerged online of an Indian woman being tied to a tree and beaten by her own family due to a property dispute.

A shocking video has captured the moment a 32-year-old woman was attacked, tied to a tree and beaten in Rajasthan, Northen India, by members of her own family.

The traumatic incident took place in Bilwa village in Jhunjhunu on July 6th 2018. One of the attackers recorded the video on their phone.

The attack is believed to have been triggered by a property dispute with one of Devi’s family members, Maniram, the brother of Devi’s husband.

In the video, we can see the victim, Suman Devi, being pulled around by her hair and viciously beaten by a group of people, which mainly consist of women, including the victim’s sister, carrying out most of the assault.

She is then pulled, tied to a tree by Maniram and other members of his family, and violently beaten again.

The footage begins showing the victim on the ground being brutally beaten, smacked and kicked especially by the other women around her.

One of Maniram’s sons is even seen stomping on the woman’s head, followed by a woman hitting her with a trunk of wood.

A child believed to be her young son is heard screaming for her release and pleading with them to stop hitting her. 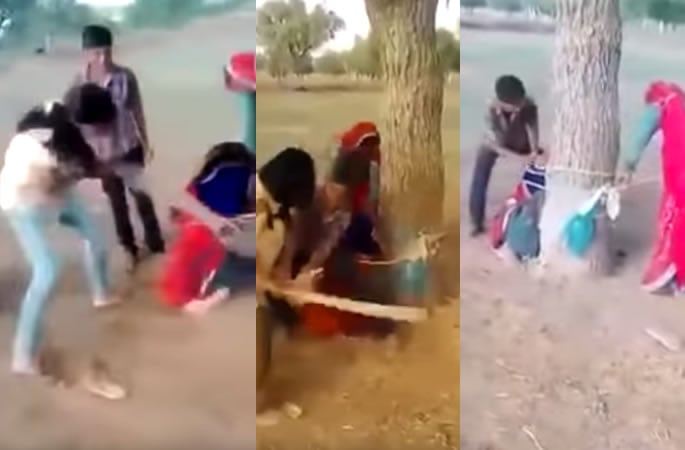 Then after hitting and thumping her lying on the ground as the surround her, lengths of rope are obtained by the attackers and they attempt to tie the woman up.

The victim tries to defend herself by kicking out at her attackers, but to no avail.

The group forcibly grab her legs and tie her up. They then wrap the rope around the tree, gradually tying her to it.

Then, another hard-hitting streak of violence commences. A young woman beats her many times with a hand-made whip of branches, while the others hold her with the ropes either side.

When another woman grabs a piece of wood to hit her with the young boy gets in the way after a few strikes.

At which point they continue to show their inhumane behaviour towards the woman by continuing to tie her against the tree wrap the rope around her, with some even going around her neck.

Watch the video of the family assault. Warning the video contains scenes of a violent nature:

It has been reported that the dispute began over a piece of land that the families had been feuding over. Devi’s husband, Dayaram Jat, had been fighting over the land with his brother Maniram in the days before the incident.

It is claimed that Devi saw Maniram on a tractor nearing the aforementioned land. She had tried to stop her brother-in-law and asked him to leave.

As a result, he began to beat her. Maniram then called over to his wife and three children. His family then joined in with the attack, as seen in the video footage.

Police officer Surendra Singh Degra explained the incident, as quoted by the Daily Mail. He said:

“Maniram was driving a tractor near a disputed road to which both the families stake claims, and upon seeing him in the area, she tried stopping him.

“This infuriated Maniram and his family, after which they took the woman to a nearby tree and tied her up.”

After the attack, Devi was taken to hospital where initial reports suggest she suffered from a broken ankle. Since the incident, three people have been arrested.

According to the Indian Express, the police arrested the accused members of Maniram’s family following a complaint from the victim’s husband. Singh Degra continued:

“We have arrested Maniram along with his wife Manesh and daughter Sanju as per the complaint filed by the victim’s husband, further investigations are still on.”

Whilst investigations into the incident are ongoing, the video footage is quite shocking.

In many rural areas of India, land is the scarcest resource and is often the source of their livelihood.

Therefore, when land is threatened or taken, rows can become heated and often lead to violent incidents, such as beatings.

Ellie is an English literature and Philosophy graduate who enjoys writing, reading and exploring new places. She is a Netflix-enthusiast who also has a passion for social and political issues. Her motto is: “Enjoy life, never take anything for granted.”
Brothers and Gang jailed for Money Laundering over £800K Cash
Finance Director jailed for Stealing over £600,000 from Employer