It has been reported that Shilpa Shetty is planning a separate life from Raj Kundra following his arrest in a pornography case.

According to a close friend, Shilpa Shetty is planning a separate life from her husband Raj Kundra with her two children.

Raj was arrested on July 19, 2021, for allegedly making and distributing pornographic films through mobile apps.

Since his arrest, he has been in judicial custody.

Meanwhile, Shilpa has refused to comment on the matter since her official statement.

But a friend has now claimed that the actress is planning to live separately with her children.

“Raj Kundra’s troubles aren’t going away in a hurry.

“On the contrary, they seem to be multiplying every week.

“The disclosure of Raj Kundra’s alleged link with adult content came as much a shock to Shilpa as to the rest of us.

The friend went on to say that Shilpa Shetty also wants to distance herself and her children from Raj’s assets.

“She won’t be touching a penny of Kundra’s assets, from what we know.”

“She earns a substantial amount of money from judging reality shows.

“She has let it be known in the film industry that she is looking at more film roles after Hungama 2 and the unreleased Nikamma.” 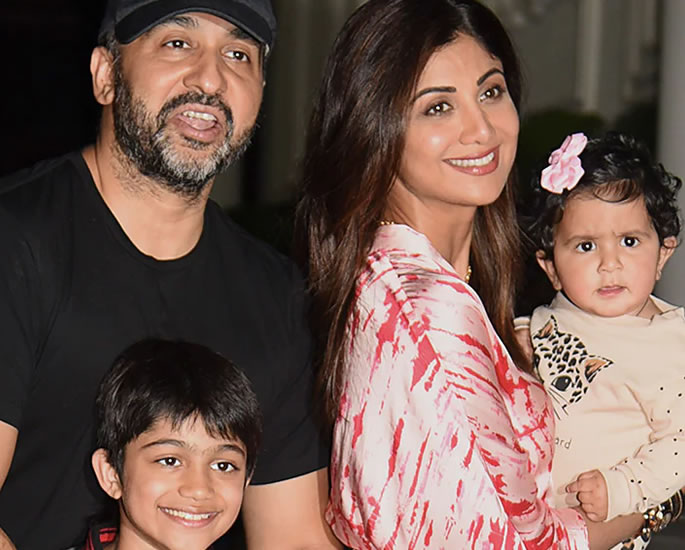 The source added: “Maintaining her standard of living won’t be a problem for Shilpa even if her husband is inside for a long time.”

While Shilpa Shetty has not commented on her husband’s arrest, she has shared cryptic messages on social media.

On August 26, 2021, the actress shared an excerpt from a book that began with a quote by Italian actress Sophia Loren.

It read: “Mistakes are part of the dues one pays for a full life.”

The excerpt read: “We can’t make our lives interesting without making a few mistakes here and there.

“We hope that they won’t be dangerous mistakes or mistakes that hurt other people.

“But there will be mistakes.

“We can see our mistakes as things we’d like to forget or as our most interesting, challenging and stimulating experiences.

“I’m going to make mistakes, I will forgive myself and learn from them.”

Shilpa Shetty clearly had a specific mistake in mind when uploading her post, but she refrained from mentioning it.

Instead, she added a sticker that read: “Made a mistake but it’s okay.”

On the work front, Shilpa Shetty returned to judging Super Dancer Chapter 4 after taking a break following her husband’s arrest.

Dhiren is a journalism graduate with a passion for gaming, watching films and sports. He also enjoys cooking from time to time. His motto is to “Live life one day at a time.”
Kriti Sanon reveals ‘Rude’ Choreographer screamed at Her
Priya Gopaldas hits back at Troll who Body-Shamed Her