The first song from the upcoming film, Sadak 2, ‘Tum Se Hi’ is fast becoming one of the most disliked songs on YouTube.

The song is sung by renowned singer, Ankit Tiwari and is picturised on Alia Bhatt and Aditya Roy Kapur.

In the video of ‘Tum Se Hi’ Aditya is trying to impress Alia by singing a romantic song at a party.

Despite initially trying to ignore him, Alia Bhatt gets immersed and captivated by Aditya’s melodious and romantic efforts.

The video goes on to show moments of arguments between the two leads. However, they cannot stay mad at each other for too long.

Sadak 2 will continue from where Sadak ended in 1991. The original film starred Sanjay Dutt and Pooja Bhatt in lead roles.

The duo will also make an appearance in the film.

The trailer of Sadak 2 is now the most disliked film trailer on YouTube with 10 million dislikes.

In fact, a campaign was started to ensure that the film’s trailer is helmed as the most disliked trailer on YouTube.

This was initiated during the days leading up to the release of the trailer by the late Bollywood actor Sushant Singh Rajput’s fans.

The late actor tragically committed suicide on 14 June 2020. It was claimed that he took his own life after being ostracised by the film industry.

In particular, conspiracy theories revolve around ‘insiders’ who drove Sushant to his untimely demise.

Now, ‘Tum Se Hi’ has already garnered more than 43,000 dislikes since its release.

“Feel so sorry for each and every singer Who sang for this movie This movie sucks!!! And songs too … SADAK 2 IS A FLOP … ?? BHANGAAR HO SABKE SAB.”

“Cheer only for Ankit Tiwari Not for star kids.”

It is believed Sadak 2 is a product of nepotism. This is because Alia Bhatt and Pooja Bhatt are the daughters of Mahesh Bhatt.

A few days prior to the trailer’s release, Mahesh Bhatt shared a message for fans through Pooja Bhatt. He said:

“Today as we begin the last leg of our journey, I feel unshackled. I carry no burden, no weight.

“No reputation to hold on to. No mission to accomplish. Nothing to prove to anyone. If the film works it belongs to all of you. If it does not, it’s mine.”

Sadak 2 is scheduled to release on the online video streaming platform, Disney+ Hotstar on August 28, 2020. 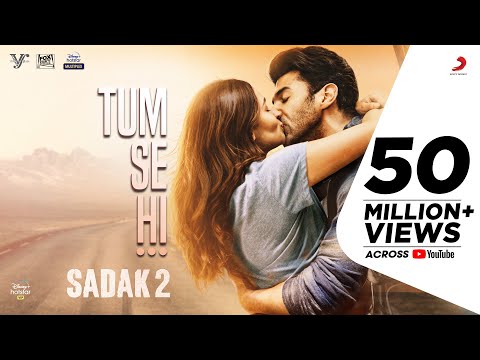 Ayesha is an English graduate with an aesthetic eye. Her fascination lies in sports, fashion and beauty. Also, she does not shy away from controversial subjects. Her motto is: “no two days are the same, that is what makes life worth living.”
Ramesh Sippy reveals Anecdotes on 45 years of Sholay
Rabia Khan: ‘the Person who Killed Jiah has Killed Sushant’