Is Nepotism in Bollywood responsible for Sushant’s suicide?

The Bollywood actor’s death left behind several questions including that about nepotism, which is said to be the reason for his suicide. But, is it true?

"Watch it at least if you wish I do survive in Bollywood."

June 14, 2020, was unlike any other laid back Sunday as the news of the tragic death of Bollywood actor Sushant Singh Rajput took the nation by surprise.

Sushant was found hanging in his residence by his house help, and the police confirmed his death by asphyxia the next day.

The 34-year-old actor was suffering from clinical depression since the last 6 months, and many claim that it was because he was unwelcomed in the Bollywood fraternity.

Rajput’s death not only brought to the forefront the importance of mental health care but also put under the spotlight the subject of nepotism in Bollywood, which is being cited as one of the major causes of his suicide.

The actor, who was at the peak of his career, could he have committed suicide due to nepotism? DESIblitz explores.

It is no secret that Karan Johar’s movies are launch pads for star kids or that Salman Khan has helped many relatives and friends kick start their career in the industry, the latest being Ayush Sharma.

It is also a well-known fact that most kids born in influential families have debuted with big banners.

Thanks to the edge they have over others because of the ease of access to the who’s who of the film fraternity.

Nepotism or favouring of family, friends, and connections is deeply rooted in the entertainment sector. Typically, the Khans, Kapoors, Johars, Chopras and Bhatts are among the few who are time and again accused of promoting the practice of nepotism.

In 2017, Kangana Ranaut, who’s known for taking bold stances, left KJo speechless when she shot at him on his popular chat show:

“In my biopic, if ever it’s made, you’ll play the stereotypical Bollywood biggie who is snooty and completely intolerant to outsiders. A flag-bearer of nepotism. The movie mafia.”

Young star kids like Sara Ali Khan and Ananya Pandey have also acknowledged the existence of nepotism and spoke about the perks of being an insider on the same chat show.

There’s no harm in giving talent a chance. However, nepotism in Bollywood has been synonymous with power play, which subjects talented newcomers from outside the industry to an unending struggle.

While the topic was brushed under the carpet, Sushant’s death has brought it back into the limelight.

After the young actor died, an old video where he shares his take on nepotism has been shared by fans.

When asked about nepotism at an awards function, the Chhichhore actor said:

“Nepotism is there, it’s everywhere, not just in Bollywood. You can’t do anything about it.”

“Nepotism can co-exist and nothing would happen, but at the same time, if you deliberately don’t allow the right talent to come up, then there is a problem.

“Then the whole structure of the industry would collapse one day. But, till then, it’s fine.” 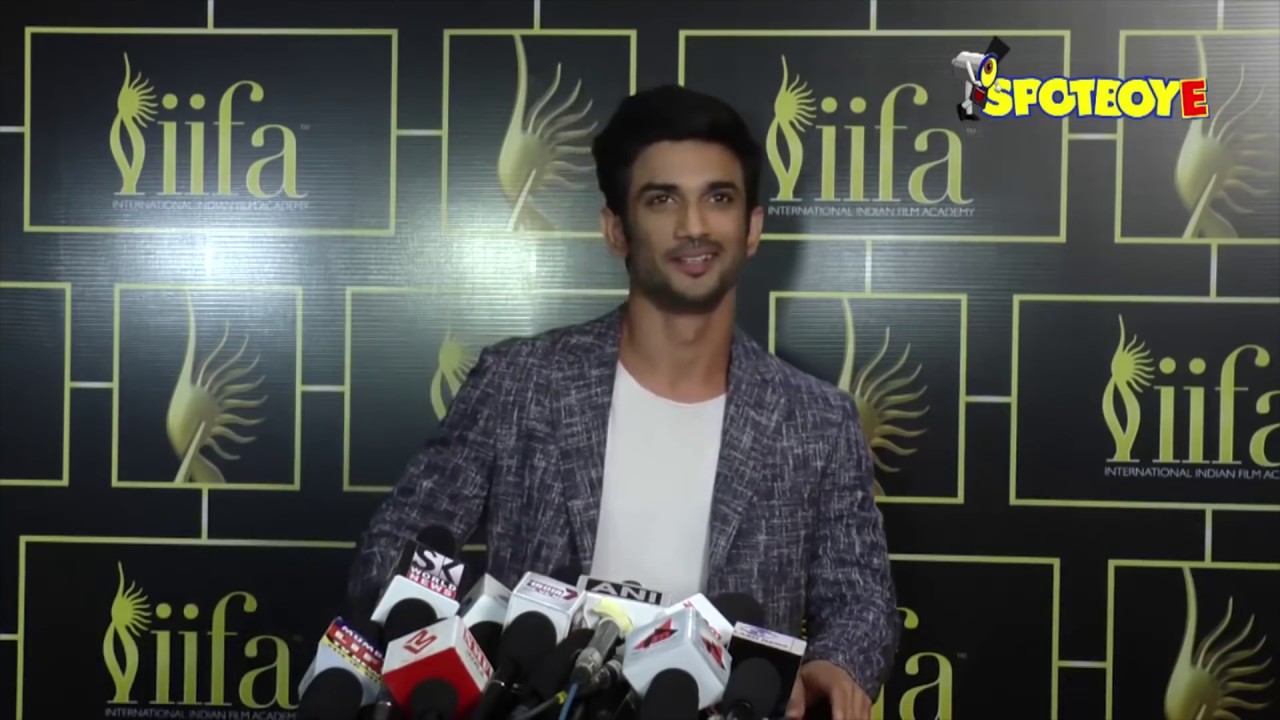 “Nepotism can co-exist with all the talented people also and you will get wonderful films because then they will be competing with each other and that would raise the performance.”

While he accepted the prevalence of the practice, he also hoped for hard work to be given its due credit. After all, he had carved his path based on talent alone.

However, how much of what he says in this video was out of respect and regard at the time, rather than perhaps what he really felt? It is a question that cannot be answered now.

In another screenshot that is doing rounds, he is seen requesting his fans to watch his film Sonchiriya:

“Arre but if you don’t watch it then they would throw me out of Bollywood. I have no Godfather, I’ve made you (all) my Gods and fathers. Watch it at least if you wish I do survive in Bollywood.”

Sushant Singh Rajput was from a non-film background and struggled his way to the top. So, could these be subtle hints into the battle that he was fighting?

If reports were to be believed, then this reel life Dhoni was at odds with Aditya Chopra.

It is also been said that Sushant had broken down after YRF backed out of Shekhar Kapur’s Paani. He was quite ambitious about the project and had even started to prepare for it.

Allegedly, he had also signed seven films after his latest hit Chhichhore, but had lost them all one after the other in only 6 months.

Could this be a coincidence or were the powerful hands of B-town at work?

The boy, who hailed from a middle-class family in Patna, rose to fame as Manav in a daily soap named Pavitra Rishta.

He got his big break in Bollywood with Kai Po Che. With his dedication and excellent performances in films like MS Dhoni The Untold Story, Kedarnath, Sonchiriya, Chhichhore; he won millions of hearts.

The film industry, however, is a big bad place, especially for those who refuse to play by their rules and only have talent to rely on.

Despite being packed with potential, it seems like Sushant’s biggest task was simply to survive. Reports and comments seem to suggest the same.

The sudden demise of the actor, who was last seen in Drive on Netflix, came across as a huge shock to fans, colleagues, and all those who knew the actor.

Everyone took to social media to express their emotions. From heartfelt condolences to poetries filled with sorrows, there was an outpour of reactions.

Amidst these, reports about Sushant’s suffering at the hands of those in power in B-town came to the forefront.

While he didn’t blame anyone, Shekhar Kapur dropped hints about Sushant having been driven to end his life by certain individuals in the industry. He wrote:

“I knew the pain you were going through.

“I knew the story of the people that let you down so bad that you would weep on my shoulder.”

“I wish I was around the last 6 months. I wish you had reached out to me. What happened to you was their Karma. Not yours.”

This sparked off a debate on nepotism in Bollywood once again and divided the industry into two.

Unable to control their anger over what could have possibly caused the loss of a brilliant actor, many celebs took a stand against the culture of nepotism.

The unabashed Kangana left no stone unturned in exposing the ‘Bollywood Mafia’.

In a video, which she released post the actor’s death, she spoke about how Sushant’s films didn’t get the credit they deserved and how it was clear from his latest posts that he needed help.

The ‘Queen’ went on to ask:

“Was it a suicide or a planned murder?”

Sushant’s Sonchiriya co-star, Ranvir Shorey, also opened up on the subject. Struck with grief, he addressed the favourers of nepotism as ‘self-appointed gatekeepers of Bollywood’ that ‘decide who will be a ‘star’ and who will be left out in the cold’ in his post.

It wouldn’t be fair to blame someone for a step that he took himself. He was playing a high stakes game, where it’s win or lose it all. But something has to be said about the self appointed ‘gatekeepers of Bollywood’.

He later also shared an instance of nepotism from a popular Bollywood awards show.

This actually unfolded on a popular Bollywood awards show:

A star kid is co-hosting the show. They announce the next category – Best Actor. The nominees are played out, and the star kid is one of the nominees. Surprise-surprise!

Abhinav Kashyap also joined the bandwagon against nepotism. In a long post on Facebook, he narrated how Arbaaz Khan and family sabotaged his career. He also appealed for a detailed investigation into the death of the actor.

Reacting to the video of Sushant talking about nepotism, Prakash Raj spoke about his experience:

“#nepotism I have lived through this..I have survived…my wounds are deeper than my flesh..but this child #SushanthSinghRajput couldn’t..will WE learn..will WE really stand up and not let such dreams die..#justasking.”

Breaking the silence on the dark side of Bollywood, Raveena Tandon also shared some of her experiences. In a series of tweets, she said that lobbies do exist and if one ‘speaks the truth they’re termed as liar, mad, or psychotic’.

The debate caused uproar amongst fans, who lashed out at many A-listers for their double standards. These celebs had expressed their sadness and wished they could have been there for the actor in times of need.

Karan Johar, who once rejected Ayushmann Khurrana because he was not a ‘star’ then, was labelled the father of nepotism and brutally attacked by netizens for saying:

“I blame myself for not being in touch with you for the past year.”

Alia Bhatt, who mocked Sushant on various occasions, was also not spared by his fans. Earlier Alia had expressed shock over her colleague’s sudden death in a post that said:

“I’m in a deep state of shock. No matter how much I think about it, I don’t have the words. I’m totally devastated. You’ve left us too soon. You will be missed by each and every one of us. My deepest condolences to Sushant’s family, loved ones, and his fans.”

In a vain attempt Sonam Kapoor tried to defend the allegations against the ‘elite club of Bollywood’:

Her post was met with messages that trolled her. One of the fans said:

The post was accompanied by a picture of Sushant Singh Rajput.

“Hello madam ji…I would like to bring to your notice that you have done 12 movies if I believe…You have received 10 awards for your performances…which except Neerja I don’t think are deserved.”

Sonam began her career with Bhansali’s Saawariya and has been heavily criticised for her acting since then.

These actors among other Bollywood celebs who are known to be a part of the privilege club also lost followers on social media channels.

Amongst the divide, there were also those who took a realistic stand and emphasised upon serious introspection.

The Nawab of Pataudi, Saif Ali Khan called the sudden showcase of love for the actor as an act of hypocrisy and deemed a day of silent introspection as fitting:

The actor didn’t give clues about nepotism, but he did mention that the industry is a competitive place where no one cares about anybody.

Vivek Oberoi also urged the film industry to introspect and change for the better in a message on social media.

While the brawl continues, the answer to whether the ruling class of Bollywood should be blamed for Sushant’s suicide remains under speculation. Plus, one cannot neglect the possibilities of personal issues.

However, some important questions about nepotism require urgent attention. Although it exists everywhere, nepotism seems to have a seriously negative impact on Bollywood.

With Bollywood losing a gem of an actor and an intelligent mind, it probably is time for considerations and change, so that talent takes centre stage benefitting the industry as a whole.

A writer, Miralee seeks to create waves of impact through words. An old soul at heart, intellectual conversations, books, nature, and dance excite her. She is a mental health advocate and her motto is ‘live and let live’.
Ranvir Singh ‘Loose Women’ Debut gets Racist Reactions
‘Suicide or Murder: A Star Was Lost’ film inspired by Sushant