Riz Ahmed has won his first ever Emmy for his performance in The Night Of. He is the first male actor of South Asian descent to win an Emmy for acting!

"If there are enough isolated examples of success, then maybe the dots start joining up."

The Emmys 2017 proved a successful night for British Asian actor Riz Ahmed. He won his first-ever Emmy for his stunning performance in TV series The Night Of.

The awards ceremony took place on 17th September 2017. Riz won his award for Outstanding Lead Actor in a Limited Series. He defeated the likes of Benedict Cumberbatch and Robert De Niro who appeared in the same category.

While the actor appeared delighted with his first Emmy, the win marks another significant feat. Riz Ahmed marks as the first male actor of South Asian descent to win an Emmy for acting!

As part of his acceptance speech, Riz credited The Innocence Project and South Asian Youth Action for helping him in preparation for his role.

He starred as Pakistani college student Nazir Khan in The Night Of, who becomes involved in a murder investigation.

“I want to say it is always strange reaping the rewards of a story that’s based on real-world suffering, but if this show has shown a light on some of the prejudice in our societies, Islamophobia, some of the injustice in our justice system, then maybe that is something.”

After his win, the actor spoke about diversity during press room interviews. While noting it as a process that happens “slowly [and] over time”, he said:

“If there are enough isolated examples of success, then maybe the dots start joining up and it’s not a slow process as it sometimes is.”

He continued: “I think what we’re starting to see is more awareness around how beneficial it can be to tell a diverse range of stories and to tell them in a way that’s authentic.”

Aziz Ansari had also received a nomination for Outstanding Lead Actor in a Comedy Series. However, Donald Glover won the award for his fantastic performance in Atlanta.

However, Aziz did win an Emmy for writing, along with Lena Waithe. The co-writers won Outstanding Writing for a Comedy Series for their show Masters of None. Lena, marking as the first black female writer to win an Emmy, delivered a beautiful acceptance speech. She said:

“I see each and every one of you. The things that make us different – those are our superpowers. Every day when you walk out the door and put on your imaginary cape and go out there and conquer the world, because the world would not be as beautiful as it is if we weren’t in it.

“And for everybody out there that showed us so much love for this episode, thank you for embracing a little Indian boy from South Carolina and a queer black girl from the South Side of Chicago.” 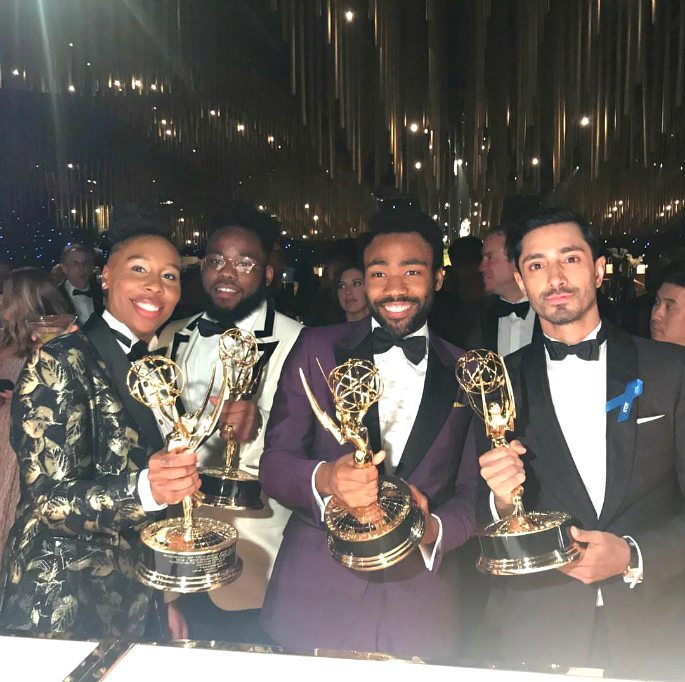 Overall, the night marked a triumph for diversity within US television. With many historic wins, it shows positivity for the representation of people of colour.

Congratulations to all the winners of the 69th Primetime Emmy Awards!