British prime minister Rishi Sunak faced criticism for asking a homeless man at a shelter whether he “worked in business”.

"So far detached from reality"

Rishi Sunak was serving breakfast at a homeless shelter in London in the run-up to Christmas when the PM struck up a conversation with a homeless man.

The man, who introduced himself as Dean, was at the food serving counter when the chat started between him and the prime minister.

In the footage shot by ITV news, the PM served him a plate of traditional English breakfast with toast, eggs, bacon and sausages.

When the homeless guy asked Rishi Sunak whether he was “sorting the economy out”, an uncomfortable conversation with him followed.

The PM replied: “That is exactly what I am trying to do.”

After Dean said that sorting the economy would be good for business, Rishi Sunak asked him “Do you work in business?”

Dean replied: “No, I’m homeless. I’m a homeless person. But I am interested in business.”

Dean shared: “I like finance, it’s good for the city and when finance and stuff are doing well, we all do well, don’t we, in London.”

Rishi Sunak then proceeded to tell Dean how he “used to work in finance”. 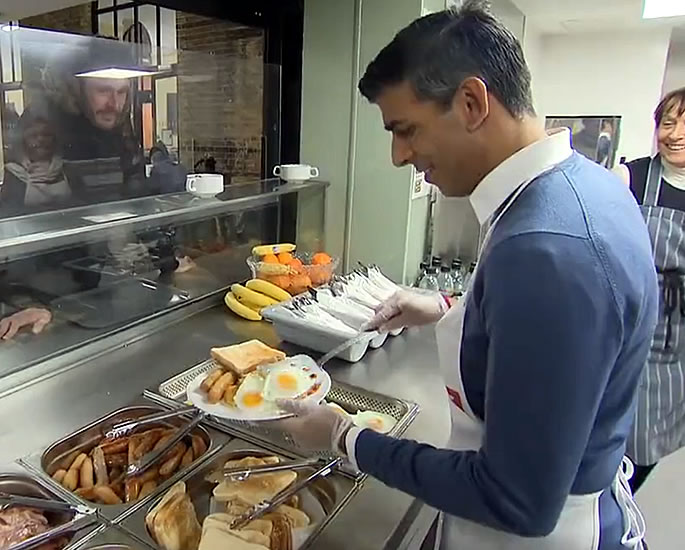 The PM then continues: “Is that something you’d like to get into?”

Dean responds: “Yeah I wouldn’t mind, umm.. but, I don’t know, I’d like to get through Christmas first.”

The Prime Minister asked Dean about his plans for Christmas during the upcoming weekend.

Dean replied: “No idea, but I’m hoping [St] Mungo’s can help me get into some temporary accommodation so I’m not on the street.”

One of the richest persons in Britain and a former Goldman Sachs banker, Rishi Sunak, was criticised for being “out of touch” by opposition party members.

Deputy leader of the Labour Party Angela Rayner posted a clip of the exchange on Twitter and labelled it “excruciating.”

“Do you work in business?"

“How much more out of touch could this prime minister be?”

“After the Tories crashed the economy, sending mortgages and rents soaring, homelessness is on the rise this winter.

So perhaps Rishi Sunak should focus on fixing this crisis rather than posing for excruciating photo opportunities.

“The last Labour government nearly eliminated rough sleeping, the next one will finish the job and end it for good.”

Replies on Twitter to the footage highlighted some issues.

Another said: “So far detached from reality”.

“Clearly, he cannot relate to people that he is supposedly protecting and supporting. He insulated himself from other people and associates with his cronies and £ms. And his values are not compatible with traditional British values.”

Ilsa is a digital marketeer and journalist. Her interests include politics, literature, religion and football. Her motto is “Give people their flowers whilst they’re still around to smell them.”
Indian Driver wins £3.3 Million in Dubai Weekly Lottery
Isha Ambani spoiled by Billionaire Father after Birth of Twins