Social media users mocked Minal Khan after the actress took Kylie Jenner’s Instagram Story and passed it off as her own.

"So Minal Khan couldn’t get some strawberries on her own?"

Minal Khan came under fire on social media after she passed Kylie Jenner’s Instagram Story as her own.

The criticism came after the actress posted an Instagram Story of a fruity breakfast.

However, given that Kylie Jenner has 352 million Instagram followers, it did not take too long before netizens found that Minal had stolen the picture.

P.s click on the picture to see the magic. pic.twitter.com/wEuHg4MmQs

The pictures were identical except for the fact that Minal had cropped the image slightly so that the ‘KylieAir’ napkin was out of shot.

Being an actress with a large following and copying a celebrity with a greater following, netizens didn’t know “whether to laugh or be appalled by the audacity”.

Many called out Minal for thinking she could fool her followers.

One asked: “Does Minal Khan really think none of us follows or knows who Kylie Jenner is?”

Another sarcastically wrote: “So Minal Khan couldn’t get some strawberries on her own?”

Other netizens poked fun at Minal by posting memes.

One joked: “There is a difference… Papaya isn’t her favourite.”

Another joked that the fruit platter was part of PIA’s menu, writing:

“Relax guys, it is PIA’s customised menu for the celebrities on diet, Kylie and Minal both were travelling to Gilgit.”

One person believed that Minal Khan had a “fetish” for trying to appear elite, posting:

“Can’t decipher whether to laugh or be appalled at this much audacity and people get insecure by looking at them??”

Some mocked the actress by posting laughing and clown emojis while others said her post was “embarrassing”.

But some did not see the issue with it, with one claiming that Sajal Aly took pictures from Pinterest to pretend that she was in Paris.

Another person said: “I guess we all do that somewhere at least 80-90% here.

“I recently uploaded a London Oxford Street pic on my story.”

However, one person said that doing such things is “so wrong and fake”.

Minal later responded to the comments, reposting a meme about people who screenshot other people’s Instagram Stories to put it as their own. 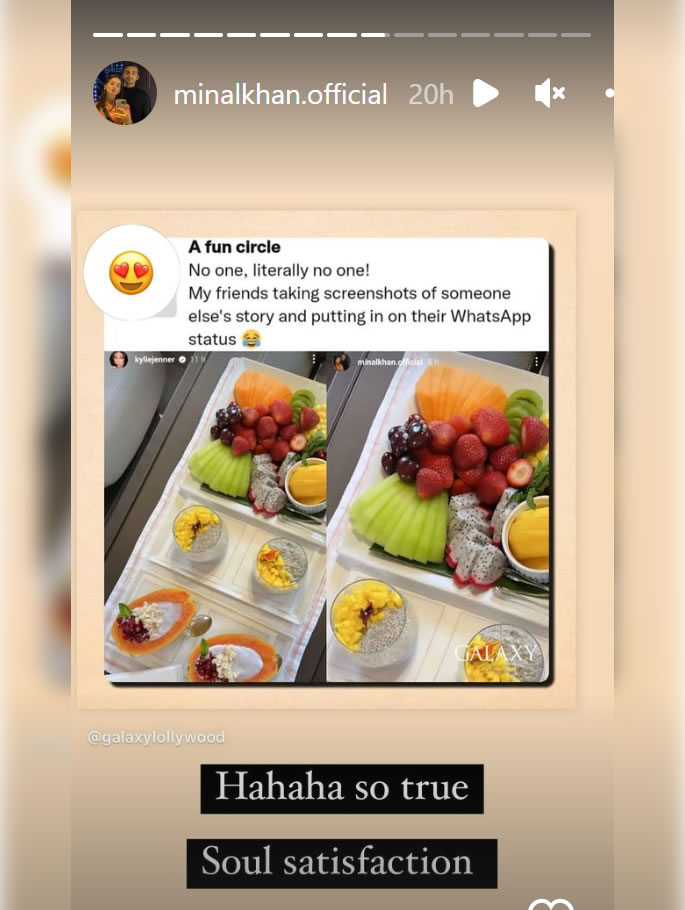 She admitted that she passed Kylie Jenner’s Story as her own but did not see a problem with it, writing:

Dhiren is a journalism graduate with a passion for gaming, watching films and sports. He also enjoys cooking from time to time. His motto is to “Live life one day at a time.”
Malaika Arora opens up on Car Accident
DESIblitz Film Fusion Festival 2022 Award Winners