Minal Khan stole another picture for her Instagram Story, causing more backlash. However, the actress fired back.

"Are we suffering from an inferiority complex?"

Minal Khan landed in more hot water after she stole another picture for her Instagram Story.

The Pakistani actress was previously called out for taking an image from Kylie Jenner’s social media and passing it off as her own.

The picture featured a decadent fruit platter and it appeared as though Minal was enjoying the array of fruit.

However, given that Kylie Jenner has over 350 million Instagram followers, it did not take too long before social media users realised that the American socialite had posted an identical picture several hours before Minal.

Netizens criticised Minal for stealing the picture and passing it off as her own.

The actress has received more backlash for trying to fool her fans again.

Minal had posted a picture of an array of food, including cheese and wine, complete with a picnic basket.

Initially, fans thought Minal was enjoying a lovely picnic in the sun but they were quick to discover that she had taken the picture from Every Day Parisian’s article ‘How to Host a Parisian Picnic‘.

Social media users criticised Minal, with many calling her “fake”.

Others laughed at the actress’ antics, with one user posting the same picture on his own Instagram Story before writing on Twitter:

Another said that Minal was passing off such pictures as her own lifestyle because inflation meant she cannot do it in reality, writing:

“Chill guys it is just the first case of inflation in Pakistan. Minal Khan may not be able to buy those fruits. Let’s spread positivity.”

Chill guys it is just a first case of inflation in Pakistan. Minal Khan may not be able to buy those fruits. Let's spread positivity. pic.twitter.com/xpBagAsjsO

A third commented: “I also wanna read at the beach like Minal Khan.”

Television host Mathira was also unhappy with Minal stealing pictures to pass off as her own lifestyle.

“Why do we copy other people’s statuses and try to show them as our own?

“Are we suffering from an inferiority complex? Or people have become more class conscious?”

Mathira went on to indirectly urge Minal to post legitimate pictures, even if it is “anda paratha” instead of stealing other people’s posts.

While Minal Khan laughed at the trolling she received for copying Kylie Jenner’s post, she angrily fired back this time. 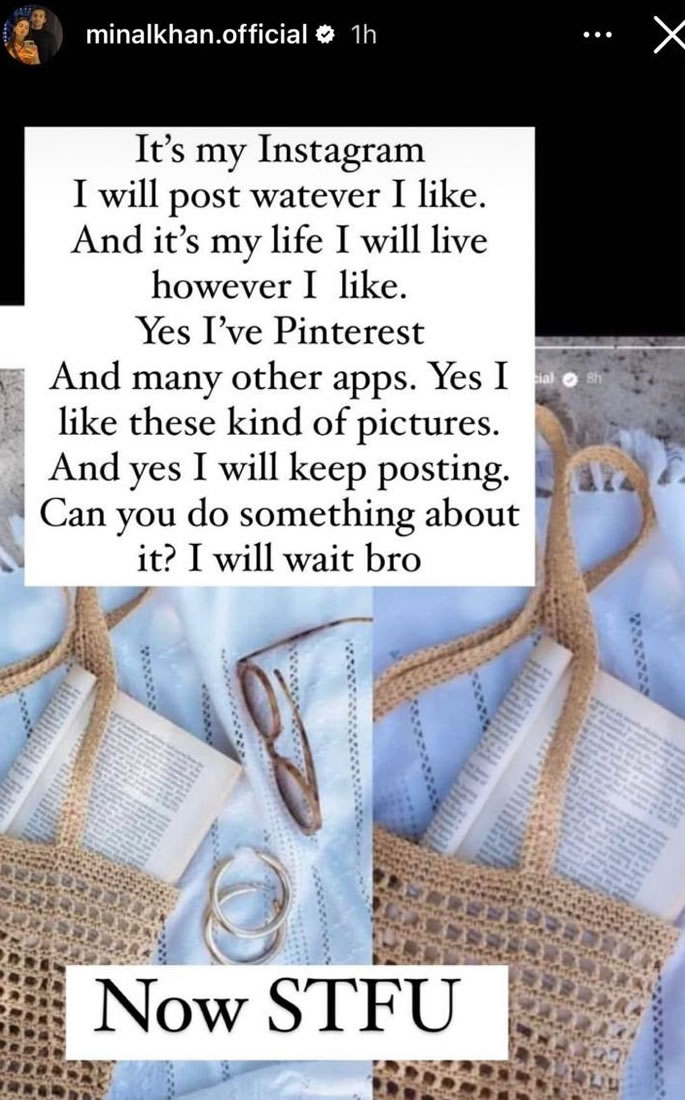 Admitting that she does take other people’s pictures to use for her own Instagram, Minal said:

“Yes, I have Pinterest and many other apps. Yes, I like these kinds of pictures. And yes I will keep posting it.

“Can you do something about it? I will wait, bro.”

Stating that she has no plans to stop, Minal added: “Now STFU.”

Dhiren is a journalism graduate with a passion for gaming, watching films and sports. He also enjoys cooking from time to time. His motto is to “Live life one day at a time.”
Disha Patani fuels Plastic Surgery Rumours in Black Co-ord
Dia Mirza opens up on Premarital Sex & Pregnancy