Ranveer and Vaani are totally Befikre in Bigg Boss

As Ranveer Singh and Vaani Kapoor, enter the Bigg Boss House, they are enthusiastically greeted by the housemates while the popular number, ‘Nashe Si Chadh Gayi’, from their soon-to-be-released movie Befikre, plays on.

Ranveer surprises Bani in the confession room and asks her to stop looking dull and play the game with a positive attitude.

In a true Befikre andaaz, Ranveer and Vaani introduce an exciting game for the contestants where they are given some dares.

There is a penalty for those who are unable to complete the challenges.

The first contestant to be challenged is the hot and handsome Jason, who is dared to do a sexy pole dance to entertain Vaani.

Up next, Monalisa is challenged to seduce Jason by dancing sensuously to ‘Yeh Raat Rukjae’. She completes the dare successfully. 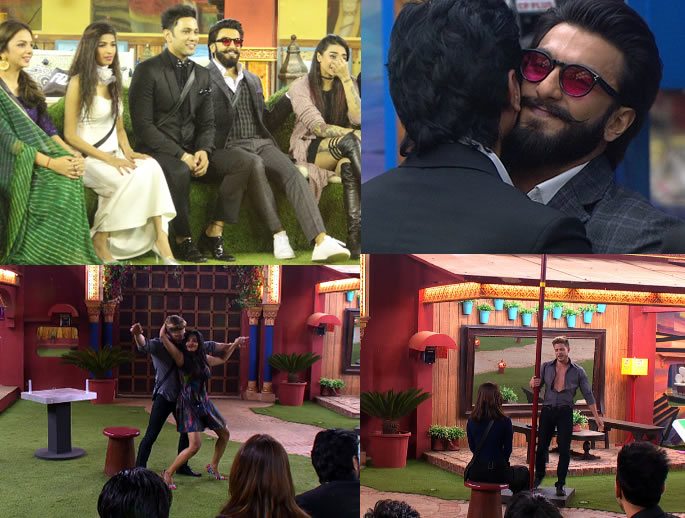 Housemates, Priyanka and Bani kiss Gaurav on his cheek as a part of the dare given to them. Ranveer says Gaurav is a lucky guy to get kisses from two beautiful girls.

Before making an exit from the House, Ranveer and Vaani dance excitedly to the title track of Befikre along with the housemates.

Both give a scintillating performance on Salman’s songs, ‘Tera Hi Jalwa’ and ‘Dhinka Chika’.

Ranveer tells Salman that he wants to dance with the actor on ‘Baby Ko Bass Pasand Hai’, after dancing to the peppy number along with Sultan, Ranveer raps a few lines of the song for him. Soon after, Vaani joins the men on stage.

As a keen follower of the show, Ranveer declares Om Swami, as his favourite contestant and also reveals that if ever he gets a chance to jointly work with him, they can create a reality show.

Salman sends Vaani and Ranveer to the activity area where they are told to act like Bollywood superstars Shahrukh Khan, Sanjay Dutt, Anil Kapoor and Priyanka Chopra, but as Bigg Boss Housemates.

Salman throws some questions at Ranveer and Vaani and they are asked to give fun replies. 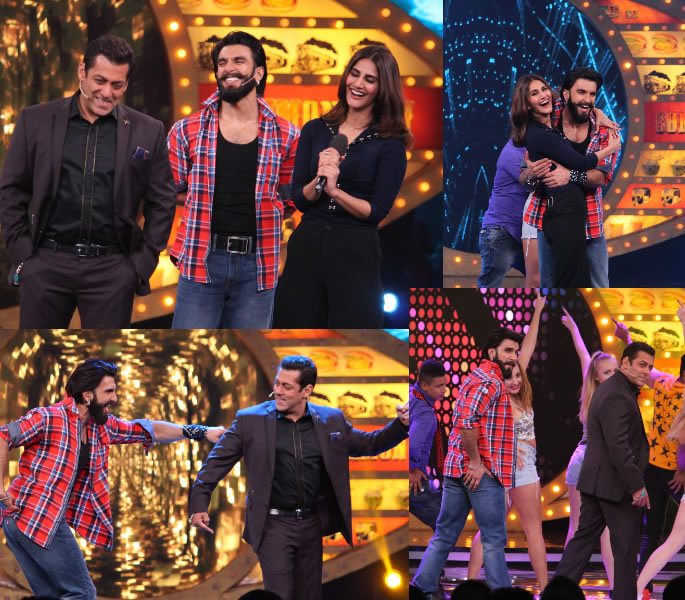 Salman says it’s time for another game where the guests are required to guess the combination of famous actors merged together in a single picture.

When a picture of Deepika Padukone and Ranveer Singh is flashed on the screen, Salman makes fun of Ranveer saying that his and Deepika’s son will look like the combination in the picture. Ranveer laughs heartily to Salman’s statement.

Salman Khan finally reveals that Elena is the latest evicted contestant from the Bigg Boss House.

Meanwhile, during the course of the week, Om Swami makes an exit and re-entry into the House and Manu has left the show to due to the passing away of his mother. Whether Manu will enter the Bigg Boss House once again is not known for now.

This week the contestants witnessed several ups and downs where there were happy and gloomy days for them. What could be in store for the housemates in the coming days?