Priyanka and Nick visit Orphanage and entertain the Children

Priyanka Chopra and Nick Jonas were spotted at an orphanage in India, giving the children a fantastic treat after their recent engagement.

Priyanka Chopra and Nick Jonas gave children and staff at the St. Catherine’s orphanage in India an incredible treat.

The pair decided to provide the entertainment which included dancing and singing.

Priyanka Chopra took to the stage and was seen dancing to ‘Tune Maari Entriyaan’ with a young girl at the orphanage.

Nick shared the video of his beau strutting her Desi moves on his Instagram story.

The actress seemed to be thoroughly enjoying herself, replaying her iconic dance moves from hit movie Gunday in 2014 starring alongside Ranveer Singh and Arjun Kapoor.

He captioned the video:  “St. Catherine Orphanage today. My heart is full.” 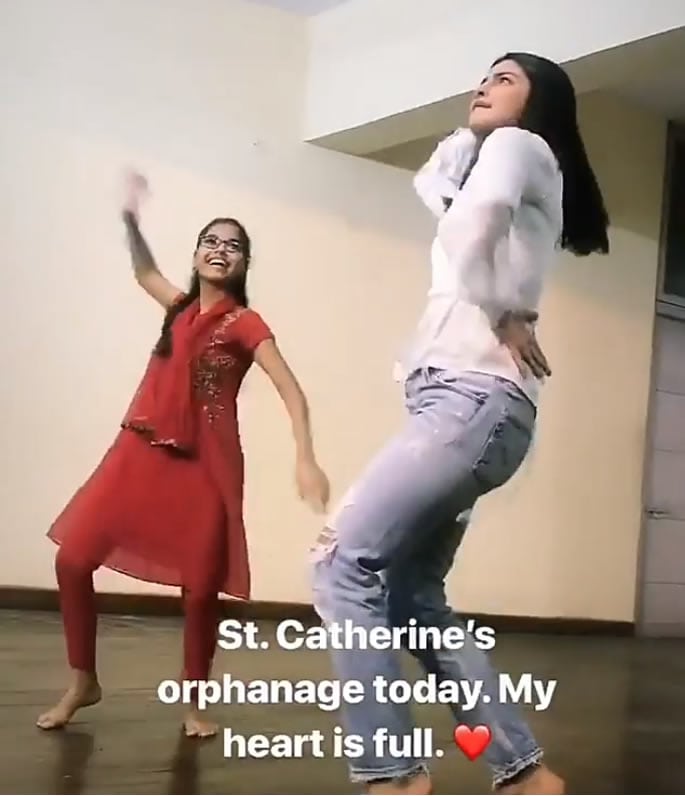 Then it was Nick’s turn.

A heartfelt video of fiancé Nick Jonas singing his hit song ‘Love-Bug’ to a group of girls in an orphanage in India was shared by Priyanka on Twitter.

The actress sat beside the former band member as he serenades the young enthusiastic fans as they clap along to his song.

Nick Jonas’ parents are captured enjoying their time at the orphanage too.

His father is spotted with a phone in his hand presumably recording the moment for himself.

12 years of knowing these girls and they get all love struck by the #lovebug… thank you @nickjonas and our families. Thank you to the sisters and all the girls at St. Catherine’s orphanage for opening your hearts to us again. I’ll see you next time pic.twitter.com/sgOnRxhwkP

The all-female orphanage in Mumbai holds a close place in Priyanka Chopra’s heart.

Priyanka is known to visit and see the young girls often and frequently posts the visits to the orphanage on social media.

The couple turned to social media to announce their engagement on Saturday, August 18, 2018, with pictures of their Roka ceremony, a traditional Indian engagement also known as ‘roka’.éé

It was a low-key event with only close friends and family in attendance.

The American singer arrived in Mumbai, India the day prior to their announcement with his parents in tow for the traditional engagement and reported after party.

There were rumours of the couple’s engagement as early as July 2018.

Their relationship status sparked around the time of the annual MET Gala fashion event hosted by Ana Wintour in May.

Both stars walked on the famous MET Gala staircase in Burberry.

More speculation arose when the Quantico actress was snapped on Instagram wearing a large diamond engagement ring in a picture posted alongside Bollywood actress Raveena Tandon on the 14th of August.

The stars seemed to have fallen in love fast with Priyanka Chopra attending a Jonas family wedding earlier this year.

The Indian actress was spotted bringing Nick Jonas to Mumbai to meet her mother and attend the engagement party of multi-millionaire Akash Ambani in June.

Their own engagement party was small but dotted a few famous faces.

It was reported that Alia Bhatt and Parineeti Chopra were among the few who attended.

Surprisingly the Duchess of Sussex, Meghan Markle has not been spotted or anywhere in sight of the actress during her joyous occasion and has not officially congratulated her.

Priyanka Chopra attended the Royal wedding as Meghan Markle’s close friend on the 19th of May in St. George’s Chapel.

Many other celebrities have come to social media to share their joy and congratulations to the newly engaged couple.

Even the actress’s Bollywood ex-boyfriend Shahid Kapoor took the stage to wish the couple luck stating:

“Many, many congratulations to Priyanka and Nick. Marriage is a beautiful thing, I can say that from my experience and I wish her all the best.”

Their wedding date has not yet been announced.

Shreya is a Multimedia Journalist graduate and thoroughly enjoys being creative and writing. She has a passion for travelling and dancing. Her motto is 'life is too short so do whatever makes you happy.'
Vasay Chaudhry talks Film, TV and Showbiz
5 Weddings: Unveils the Role of Hijras at Indian Ceremonies