Both Priyanka Chopra and Deepika Padukone wowed at the Met Gala 2018 in New York. This year, the theme of the annual event was ‘Heavenly Bodies: Fashion and the Catholic Imagination’.

Bollywood stars Priyanka Chopra and Deepika Padukone descended onto the steps of the Met Gala 2018 in a heavenly fashion on Monday 7th May.

Held annually at the Metropolitan Museum of Art, the two Bollywood beauties made quite an entrance, with each interpreting the Met Gala dress code in a uniquely stylish way.

For 2018, celebrities were given the theme of ‘Heavenly Bodies: Fashion and the Catholic Imagination’ to coincide with the Met’s current exhibition.

Drawing on heavy religious symbolism and the fine line between virtue and sin, the outfits of the celebrity guests were suitably dramatic for the chosen theme.

From giant ethereal wings to elaborate and beautiful headpieces, the stars went all out. Dresses were bejewelled from head to toe, giving off regal connotations.

Priyanka and Deepika appeared alongside names such as Mindy Kaling, Salma Hayek and Rihanna.

Their couture outfits were met with praise. Donning variations of the colour red and plenty of jewellery, they perfectly captured this year’s theme.

For the second year in a row, Priyanka Chopra turned heads in an inspired Ralph Lauren creation. The luxurious velvet evening gown flowed behind the Quantico actress and flattered her figure. She paired this with a golden headpiece that was elaborately bejewelled.

Priyanka kept her hair up, in a glamorous 1920s style bun.

Thank you @voguemagazine and @RalphLauren for a wonderful night! ?? #MetGala #heavenlybodies #metgala2018

It featured a dramatic high collar that added a cool effect to the outfit. Not to mention, the cinched in waist accentuated her figure. 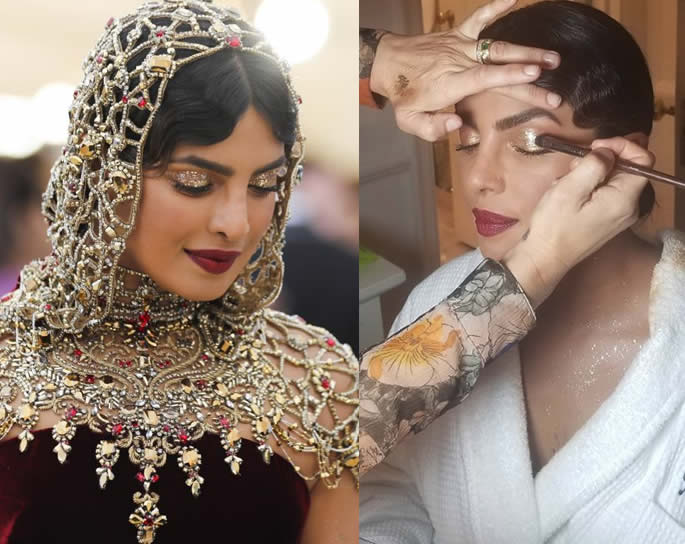 While Priyanka went for the royal priestess look, Deepika opted for cardinal beauty.

Fresh from the success of her Bollywood epic Padmavaat, Deepika stunned in a red Prabal Gurung gown. Labelled as ‘The Cardinal Virtue’, the silk crepe strapless gown features a hand-draped ‘silk gazar sculptural shoulder bloom’ alongside a chapel train.

The dramatic shoulder of the dress was accompanied by an equally dramatic thigh-high split.

Fully embracing the colour, Deepika matched her bright lip colour with her heels. Not to mention, her accessorising with pearl and diamond earrings and rings effortlessly finished the look. 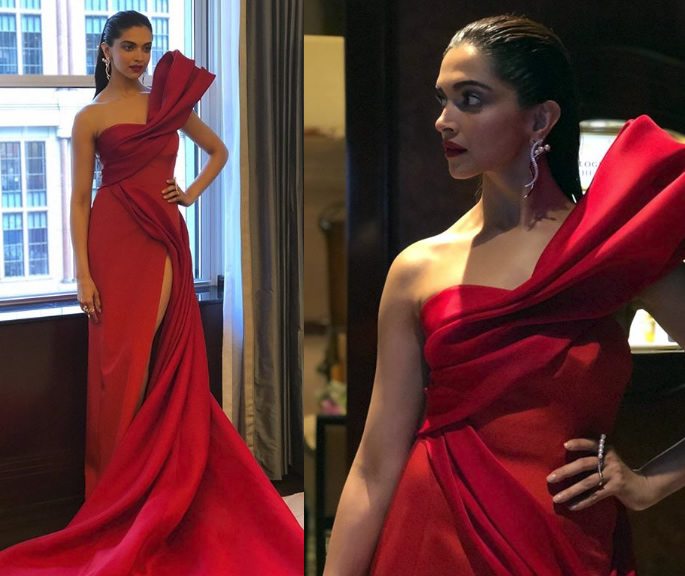 While she paired the look with plenty of sparkles, Deepika ultimately played it safe and her outfit was largely forgettable in comparison to Priyanka’s iconic trench coat dress.

Reactions on social media to her 2018 Met Gala outfit varied. Many on Twitter felt that Deepika could have followed the theme in a more dramatic sense.

In comparison, Priyanka truly wowed with another statement ensemble. Set to appear in Isn’t it Romantic alongside Liam Hemsworth next year, the Bollywood actress nailed the theme.

Both of the Bollywood actresses looked stunning. Having improved on their outfits from the previous Met Gala, we can only expect better and more to come.