Spring has come early for Priyanka Chopra as she arrives in New York in a pretty floral printed dress for her appearance on Good Morning America.

The Quantico star turned heads in an abstract bird print dress. Priyanka is certainly making a name for herself in the west and the Bollywood actress continues to make herself known as a fashion icon as well as an actress.

The 34-year-old wore her white and frilly number with a long navy coat and some strappy red heels. Priyanka completed her summery look with a pair of dark sunglasses.

Priyanka had a chat on Good Morning America alongside her Quantico co-star Blair Underwood.

During her interview, Priyanka revealed that she has appeared in over 50 movies. However, Quantico was her first audition.

Priyanka also told Good Morning America that her concussion accident on the set of Quantico happened for “really stupid reason”. 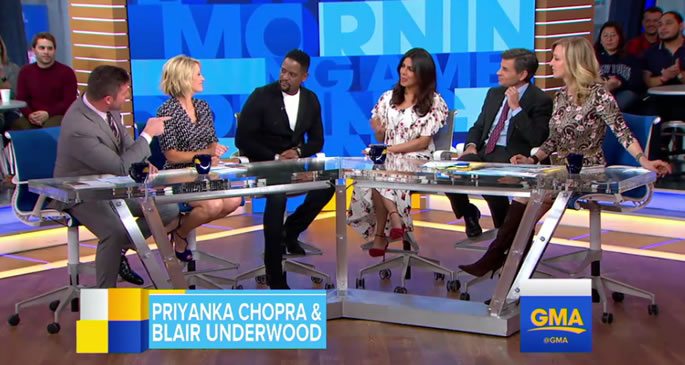 Priyanka says: “It was a wet road and rubber boots. It was a really stupid reason to fall and get a concussion. It was not at all dramatic.”

She continues: “I had a concussion, but I wish I had a better story to say that I was doing a stunt and someone punched me in the face, but none of that happened.”

Priyanka admits she wasn’t even wearing heels, she adds:

“If I was in heels I wouldn’t have fallen. I’ve done a lot of action movies when I was India so I have a lot of experience with it and actually really enjoy doing my own stunts. I trust my body, my instincts.”

Former Miss World says she celebrated with her family by taking them to eat at In-N-Out burger.

She admits she couldn’t wait to get out of her red carpet dress and have a burger.

Priyanka says: “I love food, I think it’s really good to love food. I like my burgers and when you are in those tight gowns and you are down for the night, you just want to get in track pants and eat a good meal.”

Priyanka Chopra’s recent red carpet outfits have made her one of Harper Bazaar’s 150 most fashionable women.

The former Miss World features in the ‘New Guard’ section on the Harper Bazaar’s most fashionable women’s list.

Priyanka tweeted her appreciation for being on the most fashionable women’s list:

Thx u @harpersbazaarus for including me as one of ur 150 Most Fashionable Women, among such an extraordinary group! https://t.co/6vg55yy2vG?

Watch Priyanka play Victoria Leeds in Baywatch from 26th May 2017.

Henna is an English literature graduate and lover of TV, film and tea! She enjoys writing scripts and novels and travelling. Her motto is: "All your dreams can come true if you have the courage to pursue them."
Amrita Acharia talks ITV drama ‘The Good Karma Hospital’
Harvey Specter ready for Bollywood and Loves ‘Saag Paneer’