Pregnant Indian Wife and Husband set on Fire by Family

A pregnant Indian wife and her husband were set on fire by her family. The woman was two-months pregnant. A police case is underway.

"two of Rukmini's uncles poured petrol on the couple"

A pregnant Indian wife died and her husband was severely injured after they were both set on fire by the woman’s family.

Rukmini Ransingh, aged 19, and Mangesh Ransingh were attacked on May 1, 2019, in Nighoj village, near Ahmednagar.

It was heard that Rukmini’s family were not happy about the couple’s inter-caste marriage.

He said: “While Mangesh belongs to the Lohar community, Rukmini is from the Pasi community.

“The two fell in love and got married around Diwali last year, despite strong opposition from the members of the woman’s family.”

The wedding was held in Pune due to Rukmini’s family being against the marriage.

SI Bothre said that only Mangesh’s family had attended the wedding and Rukmini’s family had been threatening to harm the couple.

On April 30, 2019, the couple had an argument which led to Rukmini going to her father’s house.

SI Bothre added: “In the statement to the police, Mangesh said that on May 1, Rukmini had called him and asked him to take her back home.

“When Mangesh went to Rukmini’s father’s house, he said the woman’s family members allegedly refused to let her go.

“After a heated argument in the afternoon, two of Rukmini’s uncles poured petrol on the couple and set them on fire inside a room, while the woman’s father locked the room from outside.”

Some of the neighbours heard their screams and the couple were taken to Sassoon General Hospital, Pune for treatment.

Rukmini, who was pregnant, had suffered burns to 70% of her body and died while undergoing treatment.

Mangesh survived the attack but sustained burns to 50% of his body.

Dr Ajay Taware confirmed that Rukmini succumbed to her injuries while Mangesh was still being treated. 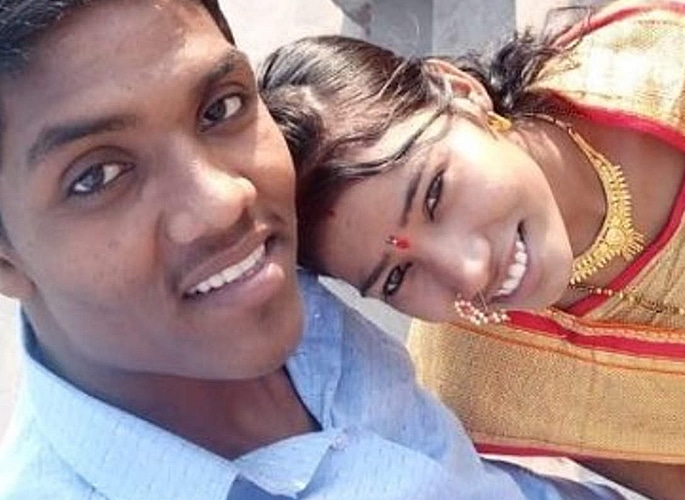 A police statement was recorded and they arrested Rukmini’s uncles, identified as Surendra Bhartiya and Ghansham Saroj. Her father, Rama Bhartiya, fled the village after the incident.

The case initially presented an attempted murder charge but was changed to that of murder.

“The woman and her husband were being treated for 50 and 70 per cent burn injuries, respectively.”

“We have arrested her two uncles and have launched a search for her father.”

Mangesh worked on a construction site alongside his brothers Mahesh and Vikrant.

Mahesh said that Mangesh had gone to Nighoj, their native village. They later received a call about what happened.

“Around 3 pm on the day, we got a phone call that Mangesh’s in-laws had thrashed him and our sister-in-law Rukmini and later set them on fire.

“My sister-in-law, who was two-months pregnant at the time, died at Sassoon hospital around 9:30 pm on Sunday.”

Meanwhile, Vikrant explained that the incident has left their family shocked.

“Mangesh has received major burn injuries on his neck and other body parts.

“He had got to know that my sister-in-law was being harassed by her family members on May 1 and so he had sought help from the local police in Nighoj.

“We want Rukmini’s family members to be given maximum punishment as per the law.”

Dhiren is a journalism graduate with a passion for gaming, watching films and sports. He also enjoys cooking from time to time. His motto is to “Live life one day at a time.”
Maryam Gill jailed for Santander Bank Fraud at Call Centre
Chinese Gang arrested for luring Pakistani Girls into Prostitution